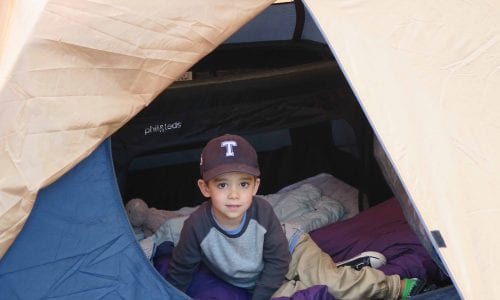 Camping with toddlers… a genius idea? Or… something else entirely?

OAWK » Holiday Ideas » Baby & Toddler Travel » Camping with toddlers… a genius idea? Or… something else entirely? 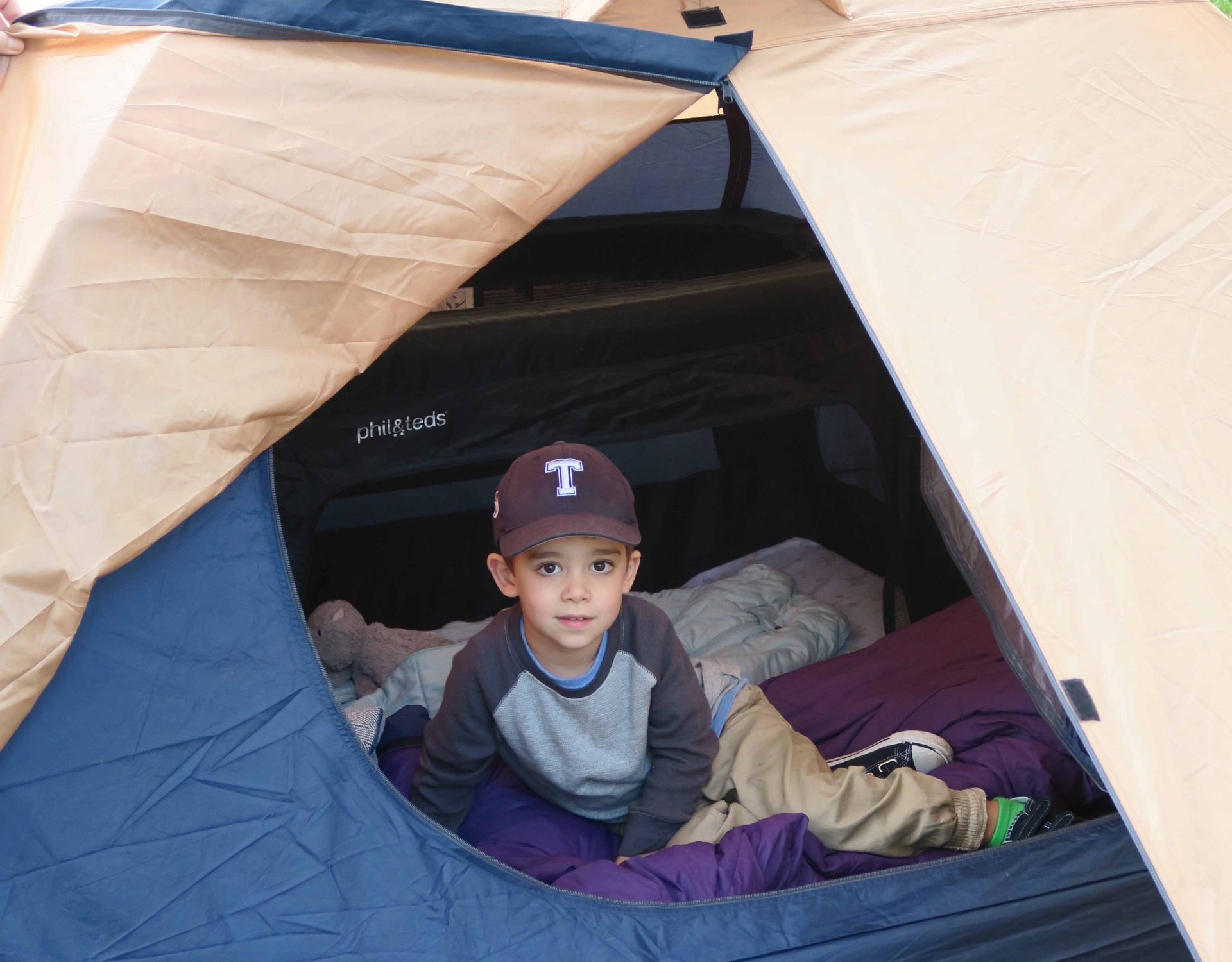 Since my son was born, I’ve been firmly on the “We can do this!” side of the fence when it comes to travel. We’ve done long-haul flights and short-haul flights; road trips and train journeys; homey house sits and five-star hotels. But I confess, every time I’ve considered a camping with toddlers, a little voice kept saying in my head: “Is this really a good idea?”

Admittedly, camping involves a raft of logistics. There’s stuff to sleep on, stuff to sit on and stuff eat off. You need methods to keep food cool while the humans stay warm: no wonder my mind boggled every time I thought about it.

But I kept coming back to the idea because there’s so much that’s great about camping: it’s natural, it’s entertaining, it’s social and, frankly, it’s cheap. What’s not to love?

So: I buck up. We embrace it, it rains, and we have an absolute ball. I – by no means – nail it first go, but I DO learn what to do next time. And yes, there’ll be a next time: sooner rather than later: I’ve decided that camping with toddlers is superb fun, once you get the basics right.

Sue White’s 7 tips for a successful camping with toddlers

Tip 1: Take other kids (the more the merrier!)

Mid way through day one of our first camping trip, I quickly realise the secret ingredient for camping with toddlers: kids entertain other kids. Take a bunch with you and the pressure on the adults to be ‘cruise director for one’ is vastly diminished. If you’re camping in a holiday park versus a more rustic national park campground, the volumes of children multiply and, in my experience, the trip gets even easier. 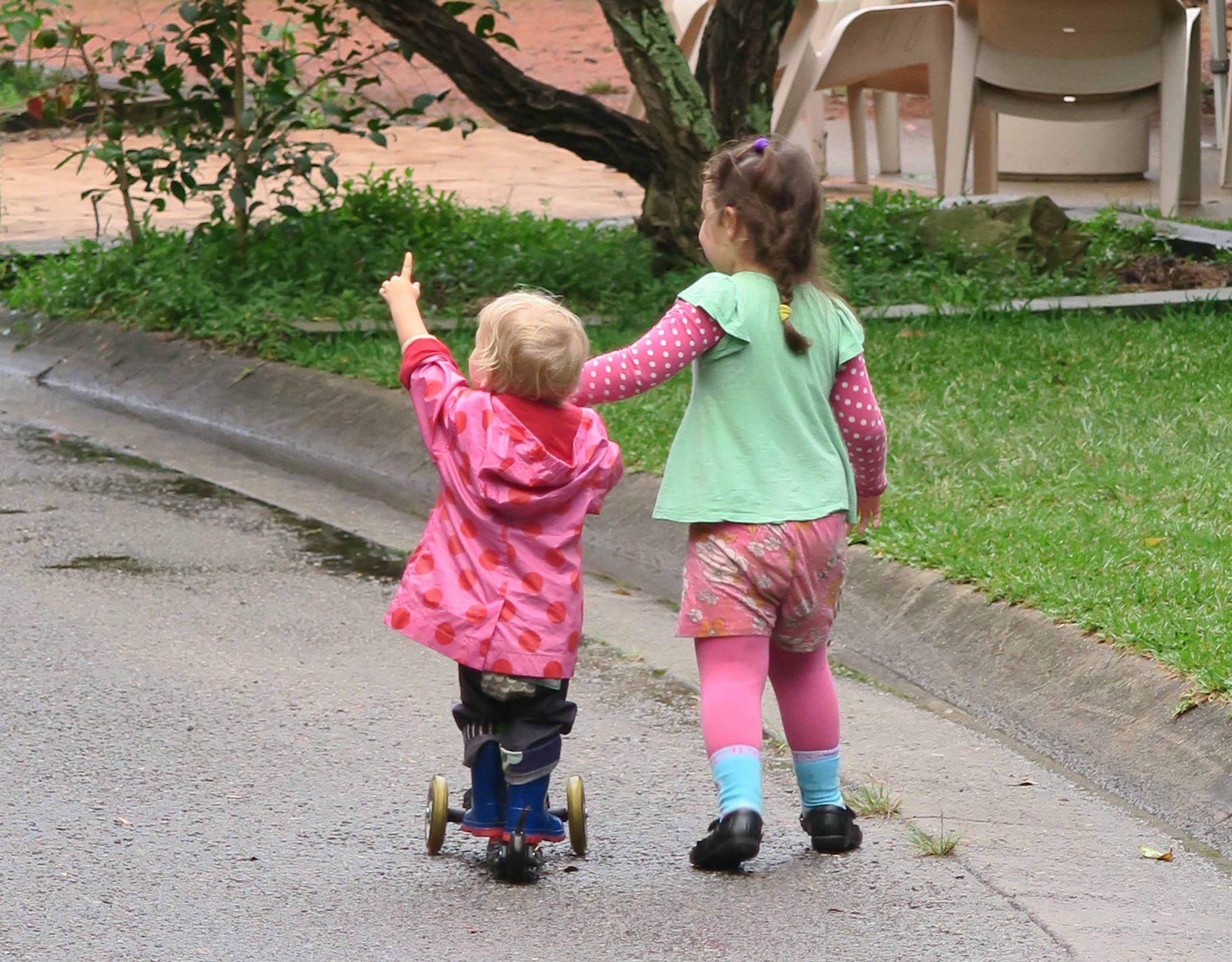 Not only is camping with other families more pleasant for the adults (there’s plenty of downtime, even with an inquisitive toddler around), but for new campers, friends hedge against the very real likelihood that, as a new camper, odds are you will forget stuff. I forget the folding chairs (despite having two in my shed) and, of course, it rains, so sitting on damp ground is far from appealing. Happily, my experienced camping buddies have spares. I forget tongs, and oil – both essentials for a good BBQ (I’m so focused on plates and cups I bring an oversupply of each instead). Again, friends to the rescue.

Sussing out their setup over the weekend, I remember the trick from my own childhood: big plastic tubs with lids, purpose-packed with camping utensils, salt, pepper, the works. I make a note to create one before my next trip – not only will it save packing time but it will mean less chance of forgetting the tomato sauce, salt, silver foil or chopping board (yes, I forgot all of the above).

Tip 3. A travel cot inside a tent isn’t a silly idea.

While I’ve heard of one friend sleeping their toddler in a one-person tent just next to his, I wanted my son at arm’s reach. But what to sleep him in? At home, he’s still in a cot, so I take my Phil and Ted’s cot and set that up inside our tent. It’s a good choice for the job, as it has a zip up top to guard against mosquitos, as well as a prized side zip (this gets opened in the middle of the night so my son can snuggle up if need be, but avoids him rolling around the tent when it’s adult-free). 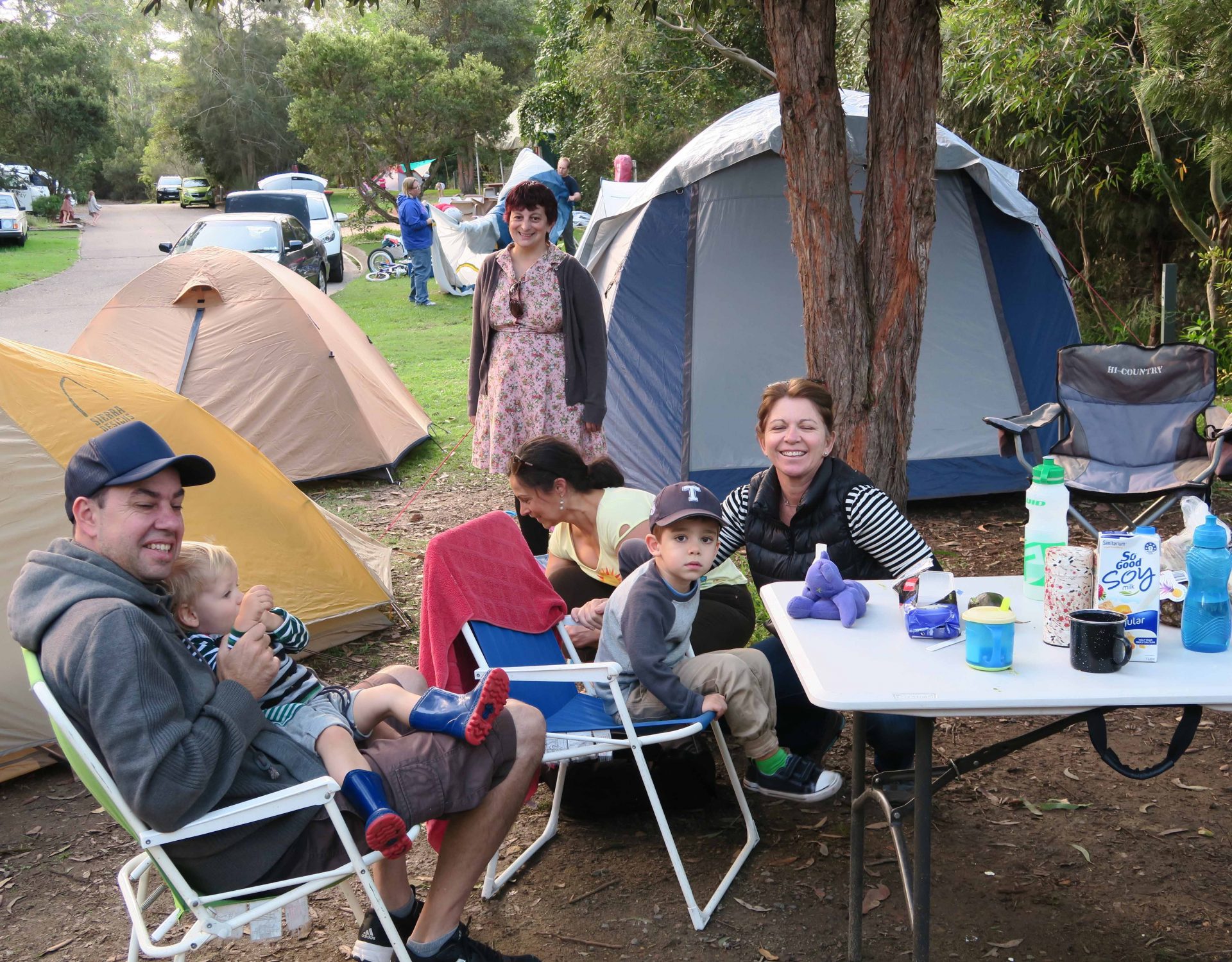 Tip 4. You need a bigger tent than you think.

In theory, I’m all for being a minimalist, but I’m surprised a just how small my three-person tent becomes once the travel cot goes in. If we end up doing this more often I’ll be upgrading to a two-room tent: one for sleeping and one for indoor play on rainy days.

Don’t think your first camping trip has to be a cross-country mission. While car camping is fabulous with kids, it’s good to pare things back even further by starting local, and spending just a few nights away at a maximum. Even one night can be a good trial (pick somewhere within an hour of home). This means you’re close enough to home to bail, if something goes awry, plus, the logistics of keeping food cool reduce significantly when you’re only away for a couple of meals. 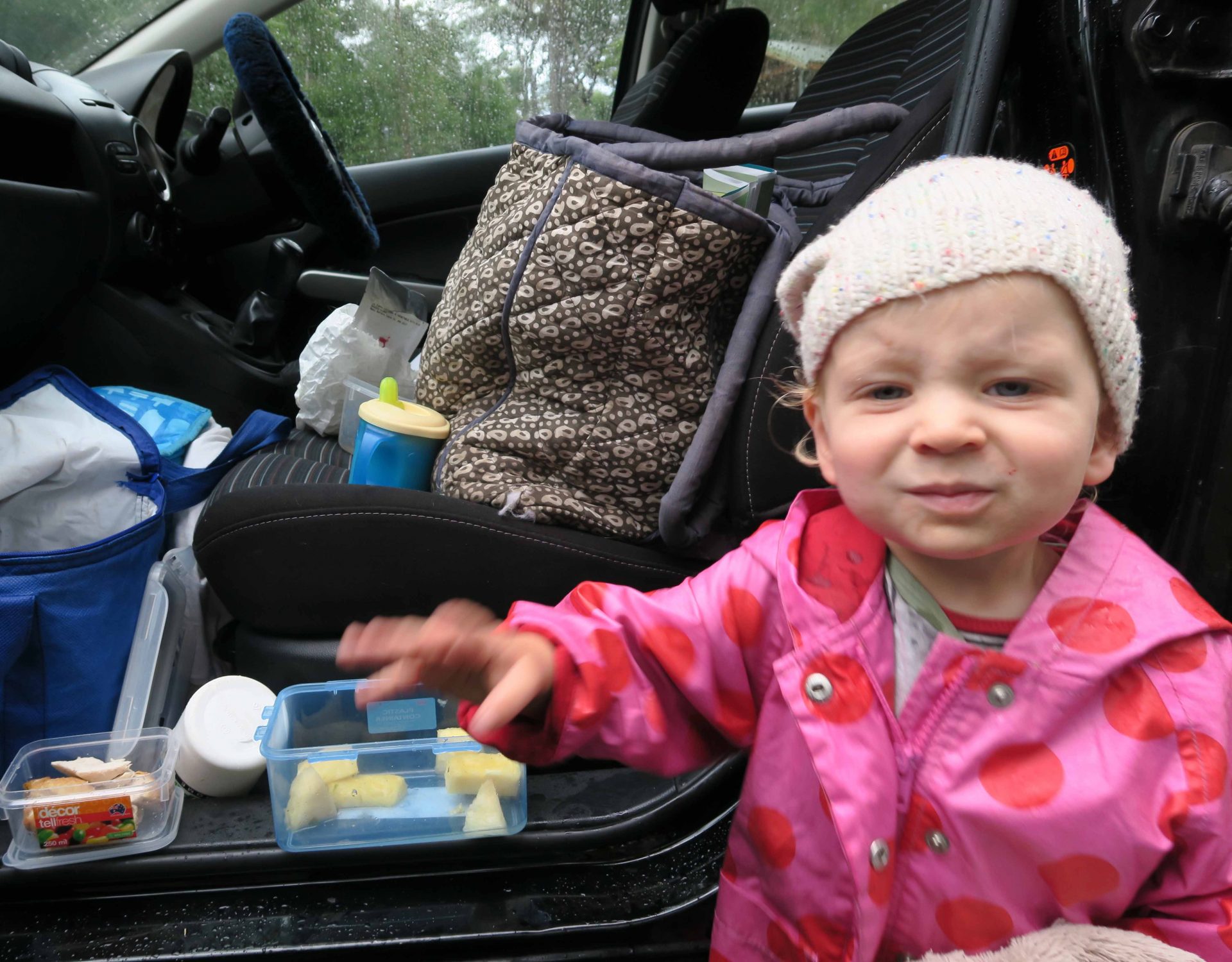 The difference between a 15 to 18-month old and the over-three-year-old crowd becomes starkly obvious when you’re in a campground. My 18 month old thinks tent pegs are fun to pull up (note: hammer them in all the way!); decides other people’s tents are for shaking (not the best way to make friends); and has no concept of looking out for guy ropes (a campers trip hazard). But he loves pottering in the bush, the freedom to explore, and following the older kids everywhere (you win some and lose some). 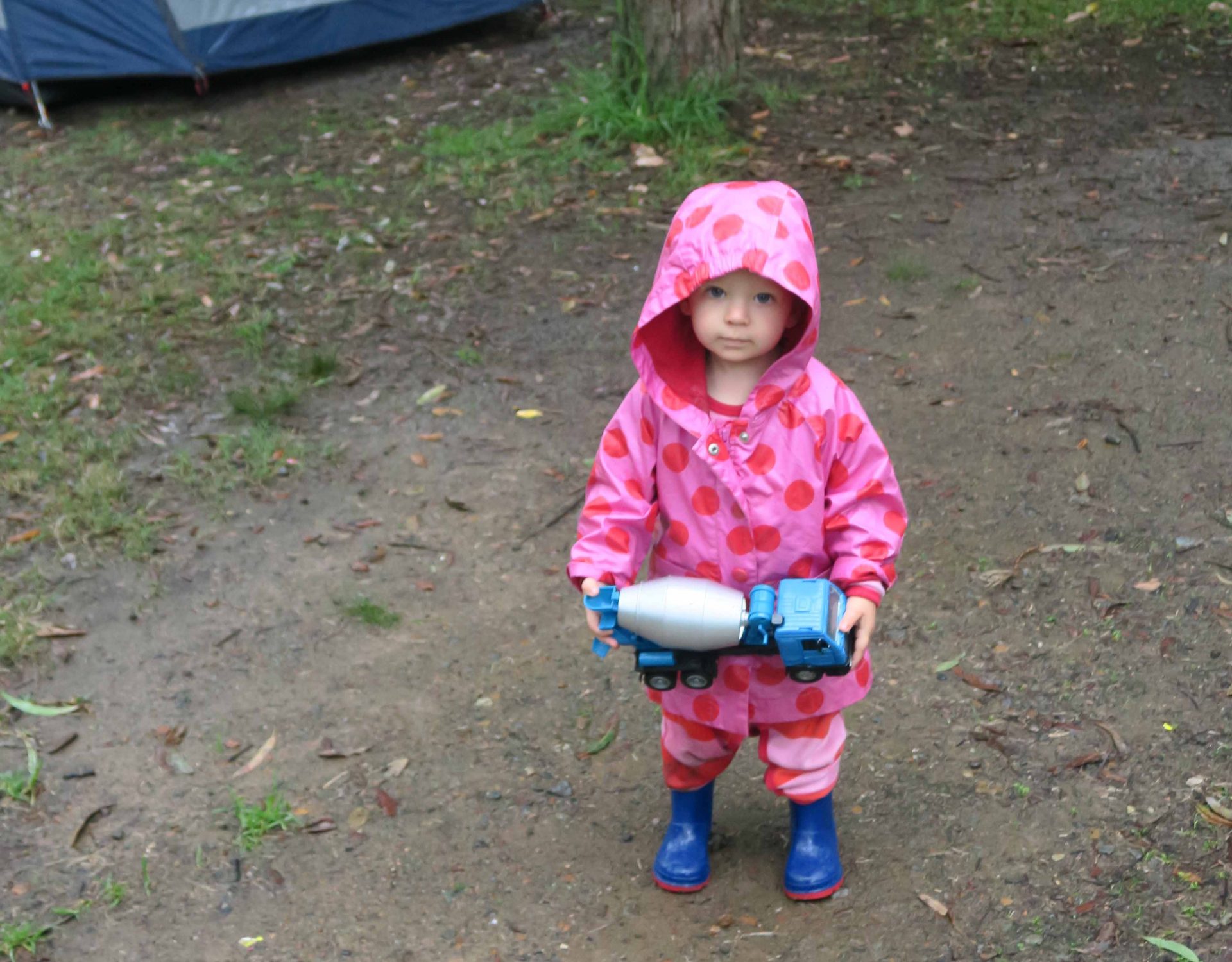 Of course, on our first trip, it pours. I arm my toddler with a raincoat and gumboots and let him go for it in the puddles. He can’t believe his luck and has a ball. In my experience, rain is more depressing for the adults than the kids; kids don’t really care.

Some great news? All this outdoor play will tire out your toddler pronto. My son falls asleep in my arms on night one, and from then on it’s early to bed each night. True, there’s a downside: this also means it’s early to rise – but really, when camping, everyone wakes with the sun.