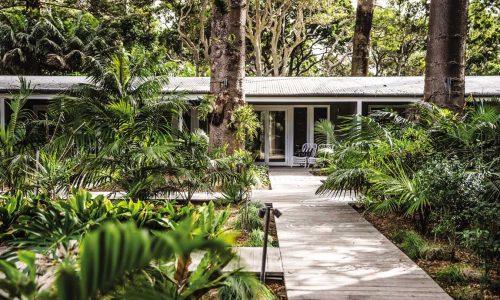 TripAdvisor’s No.1 Hotel in Australia for 2020, Pinetrees Lodge on Lord Howe Island, has gone carbon neutral. The owners spent more than $5 million on renovations to help reduce the lodge’s carbon footprint, including refurbishing all guest rooms following solar passive design principles, a 95 per cent conversion to LED lights and installing water saving taps and toilets. They also changed the restaurant and laundry operations to reduce water and power consumption, invested in new cars, reduced waste, installed worm farms and compost bins, and built a large organic market garden to limit food miles. Altogether, Pinetrees Lodge has managed to reduce power consumption by 30 per cent and water consumption by 35 per cent. After the renovation was finished, they analysed all sources of carbon emissions from the business, including electricity, freight, food and beverage, transport and more, and calculated an annual total of 1073 tonnes. These emissions were offset by investment in the Rimba Raya Biodiversity Project (a habitat protection project in Central Kalimantan with strong community-based initiatives), and the Protection of Tasmanian Native Forest Project (an initiative to expand our national conservation estate on private land). Both projects have a strong focus on conservation and forest restoration.

Pinetrees is also running the Sallywood Swamp Forest Restoration Project in its back paddock. Sallywood Swamp Forests is a Critically Endangered Ecological Community in NSW. Over 95 per cent of the original forest coverage was destroyed by grazing, and only a few patches remain. In 2018, Pinetrees partnered with the Lord Howe Island Board to seek funding to restore a 2ha patch of forest and, in 2019, it received $100,000 from the NSW Government through the NSW Environmental Trust. During 2020, Pinetrees and the LHI Board staff planted around 3000 trees and palms, and in 2021 it will build its own nursery and plant another 3000 trees and palms to the north of the current project site. By 2030, they aim to have doubled the amount of Sallywood Swamp Forest on Lord Howe Island (and on the planet). This forest restoration is not included in its formal carbon offset calculations. “Our carbon neutral certification is a big step for Pinetrees and Lord Howe Island,” Pinetrees co-owner Luke Hanson said. “We wanted to demonstrate that small businesses like ours can lead on environmental and social issues, and still be profitable. In our view, it now makes perfect business sense to offer holidays at a carbon neutral hotel. Consumers have plenty of choice about where they travel and how they engage with their destination, and our carbon neutral certification will provide another reason for guests to feel good about their stay (and hopefully return). As well as additional business, carbon neutrality is engaging our staff in some bigger picture ideas and helping us build genuine business to business relationships with new carbon neutral suppliers, such as Five Founders Australian Beef, Ross Hill Wines, Qantas and BioPack. After years of watching governments treat climate change like a political hot potato, we finally feel like we’re doing something useful. The effort and cost associated with carbon neutral certification hasn’t affected our service or reputation. Pinetrees was TripAdvisor’s No.1 Hotel in Australia in 2017, 2018 and 2020, and was also TripAdvisor’s No.1 Hotel in the South Pacific in 2020, ahead of all hotels in Australia, New Zealand, Fiji, Samoa and Tahiti.”

A child meeting the shark ray, Bowie, at SEA LIFE Sydney Aquarium. Image: Destination NSW Is it a shark? Is

8 family-friendly restaurants in Queenstown and Arrowtown in New Zealand