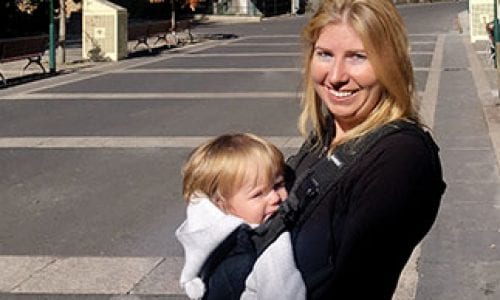 ANGELA SAURINE finds plenty of surprises during a trip with her toddler to the Oberon region of NSW.

Oliver’s eyes dart from side to side as he leans back in his baby carrier taking in the limestone formations that surround us. They stare up at the ceiling of the chamber before coming back to mine for reassurance. It’s understandable. The sparkling crystal compositions are astonishing for an adult – I can only imagine what a one-year-old must think.

I had been a bit nervous about taking a toddler underground for a tour at the Jenolan Caves, around a three-hour drive from Sydney in Central NSW. But when a family reunion in Oberon brought us to the area, I thought it was a great chance to revisit one of the places I loved from my own childhood. I have vivid memories of driving through the large cave tunnel on a bus during a school excursion and coming across a gorgeous, Swiss-style village on the other side. And with trips to Europe off the cards for the moment, surely this is the next best thing?

There are nine caves to explore, and it’s tough deciding which one to go with. In the end I opt for the 1.5-hour Diamond Cave tour, which includes the easiest, most accessible cave, the Imperial Cave, and the Diamond branch. When I call to book, the most-visited Lucas Cave, which offers great variety, also sounds appealing. “Maybe we can do that one the next day,” I say optimistically. “Maybe see how he goes with the first one…” comes the reply. Fair point.

Oliver is due for a nap around the time our tour starts, and I envisage him sleeping in his carrier for at least part of it. But he is far too enraptured in the spectacle for that. He cries at times, and I retreat to the back of the group so other guests can hear the guide’s explanation. I find myself wishing I had booked a shorter tour. But then there are magical moments that make me glad I am giving him this early taste of adventure. Fortunately, our guide, Geoff – a Qantas pilot who is so passionate about the caves he moonlights there once a month – is understanding. “I’ve been there,” he says, empathically.

The Imperial Cave follows an ancient river passage and is mostly level. The Diamond branch is lined with pure white crystal formations. “It’s like stepping into a jewel box,” Geoff says, and he is right. The tour includes an optional visit to the northern Jenolan Underground River via a 66-step spiral staircase. Despite my handicap – if I can call my adorable offspring that – I suffer severe FOMO (Fear of Missing Out), and I must check it out. I am glad I do as seeing the clear, turquoise water turns out to be one of the highlights. For both of us, I think. Oliver giggles when I bend over to go through low tunnels. He loves seeing the lights flick on and off and running his hands along the chicken wire netting which has sadly been installed to protect some sections of the cave. While he is too young to appreciate it, other kids in our group are fascinated to see the skull of an extinct Tasmanian devil, found in the cave, on display.

All up we conquer 386 steps during the tour, and I am feeling beat. But there is much more in store. Next, we head to Mayfield Garden – Australia’s largest privately-owned cool climate garden. Around a 15-minute drive from Oberon, 16ha of the garden is open to visitors for 363 days a year. The Hawkins Family Garden – encompassing an extra 49ha – is also open four times a year during seasonal festivals, including on the day we visit. That means we have a total of 65ha to explore! We catch the bus to the top of the hill and meander back along the accessible gravel pathway that cuts through the middle. While it’s impossible to explore every nook and cranny with a pram, we get a pretty good taste. Oliver sings in his pram for much of the way, so I figure he is enjoying it. We stop to watch swans and ducks paddling on the lake, and he laughs uproariously when we take a wrong turn and have to carry the pram down some stairs. He also gets a kick out of the rusty old Bedford truck near the kiosk where we enjoy wood-fired pizzas cooked in an outdoor oven for lunch. It is a great vibe, in glorious sunshine with live musicians performing nearby.

The Oberon region is also popular for foraging and fossicking. The area’s pine forests provide ideal conditions for exotic wood mushrooms, which are prized in Europe and served at some of Sydney’s best restaurants. My uncle, aged in his 70s, remembers finding sapphires on the side of the road when he worked as a woodchopper at Vulcan State Forest at Black Springs with my grandfather 50 years ago. Consi Gaiser, from Oberon Visitor Centre, says people still find gems every weekend, including the odd diamond. “It’s just a matter of patience and not giving up,” she says.

You can hire fossicking kits, which include a large sieve, small sieve, shovel and gold pan, from the centre and have a go in the beginners’ luck noodling patch outside, for a gold coin donation. Consi shows us how to separate large rocks from small rocks before washing the dirt off and spreading them out in the sun, looking for shiny rocks. We come away with a few small treasures, which will go into Oliver’s box of special things.

Before we return to our accommodation at Jenolan Caves House, Consi also tips us off that you can often see the resident platypus at Blue Lake, on the other side of the cave arch entrance, at dawn and dusk when there are fewer people around. But Oliver falls asleep in the car on the way back, and it is dark when we arrive. Instead, we head straight to dinner at the grand Chisolm’s Restaurant. When we enter, the waitress kindly fetches a highchair and gives Oliver crayons and paper, which he promptly tries to eat. Fortunately, the food from the buffet is ideal for adults and toddlers, including roast chicken with polenta, succulent braised lamb shank, risotto, chick peas and creamy mash potato. Oliver spends much of the evening pointing at the high ceiling. Combined with the grand piano and large draped curtains, it is about as different to where we usually eat in the kitchen at home as you can get.

Built in an alpine Federation-style in the late 1800s, Caves House is on the NSW Heritage Register. While it’s looking a bit tired, with paint peeling from the walls, it is soon to be transformed under a $10.4 million funding commitment from the NSW Government which will see all 36 guest rooms refurbished, including ensuites in every room, as well as upgrades to the restaurant, the reception and entry areas and improvements to the heating, cooling and power systems. It follows an $8.5 million grant announced last year to upgrade the gift shop and guides’ office, build a theatrette and add improvements to the existing walking tracks and boardwalks around the Blue Lake.

We walk down to the lake the next morning. Again, it’s too late to see the platypus and, even if it wasn’t, Oliver’s happy chattering would no doubt scare it away quickly. But it’s lovely seeing the reflection of fern trees in the still blue water, and having it pretty much to ourselves before the tourist hordes arrive. I vow to return when Oliver is a few years older, and set the alarm early to catch the platypus then.

The writer was a guest of Oberon Tourism, Jenolan Caves and Mayfield Garden.

Oberon is around three hours’ drive from Sydney in Central NSW. Be prepared for a long, steep and winding descent to the Jenolan Caves.

Choose from a convenient room in Jenolan Caves House, the motel-style Mountain Lodge, the self-contained Binoomea Cottage or Jenolan Caves Cottages, a short drive from the caves. jenolancaves.org.au