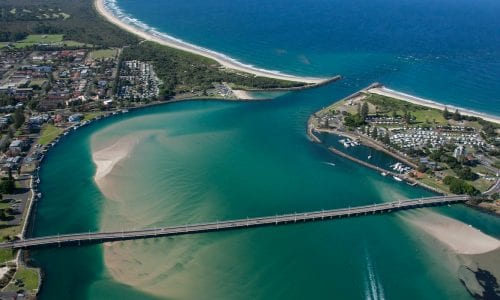 It’s easy to forget that the north coast of NSW was the first to bear the brunt of the 2019 bushfire emergency with a fire season that started in spring at favourite family destinations including Forster, Tuncurry and Harrington. More than 100 homes were lost in the Barrington Coast region, with business down up to 80 per cent over summer. But while thousands of hectares of parks and forests were burnt, tourism infrastructure was mostly unaffected, or saved by firefighters. All national parks and camping areas reopened in January.

The Barrington Coast is great for lovers of the outdoors, from the mountains to the sea. Easy walks in its national parks take you to lookouts and hidden waterfalls, or you can paddle like an explorer on its rivers. Riverside camping provides wonderful opportunities for swimming, lazing on inflatables or watching out for platypus, while its coastal lakes are ideal for kayaking, fishing, boating, swimming, stand-up paddleboarding, snorkelling and waterskiing.

See the tallest tree known in NSW, The Grandis, in the picnic area in Myall Lakes National Park, just north of Bulahdelah. Wander coastal woodlands bounded by long isolated beaches at Mungo and Seal Rocks, or dig your toes into the white sands on the southern shores of the Barrington Coast around Hawks Nest. Explore the rural landscapes of the Manning Valley, including Ellenborough Falls and Potoroo Falls in nearby Tapin Tops National Park, and the forests perched atop the Lansdowne escarpment, Crowdy Bay National Park and Coorabakh National Park in the north.

There are holiday parks and convenient motels galore in the region’s towns, as well as B&Bs and self-contained holiday houses. Polblue in Barrington Tops also boasts the highest campground in Australia that you can drive to – or why not hire a houseboat and meander along the lakes and rivers? “For a short time, it felt like parts of our region were burning from mountaintop to sand dune, but the fires have passed, the smoke has cleared, and the rain has finally fallen,” MidCoast Council’s destination management coordinator Sharon Bultitude says. “So now in the Barrington Coast we’re inviting holidaymakers from across Australia to be inspired by our beautiful countryside and breathtaking Pacific coastline. Revisit an old favourite spot or uncover somewhere completely new. Whether you love the coast or the mountains, there are over 10,000sq km to discover in the Barrington Coast.”