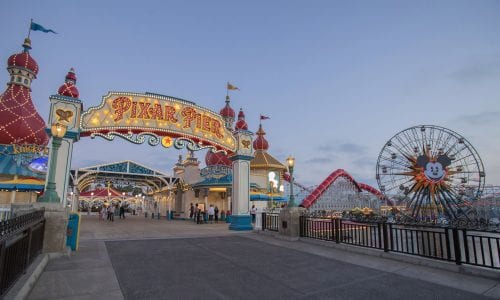 With its two Disneyland Resort Parks, beautiful beaches, outlet shopping malls and all-American experiences – like seeing the Anaheim Ducks ice-hockey team and the Angels baseball team in action – it’s no wonder Anaheim is such a popular destination for Aussie families. Just a one-hour drive from Los Angeles International Airport, on America’s west coast, it’s also super easy to get to. And even if you’ve been before, there’s always something new to entice you back.

This year’s biggest drawcard is the Star Wars–themed land Star Wars: Galaxy’s Edge, which is set to open at Disneyland Park. Millennium Falcon: Smugglers Run, which gives guests the chance to pilot the Millennium Falcon on a customised secret mission, will be the first attraction to open on 31 May 2019, with reservations required for the first few weeks.* It will be followed by Star Wars: Rise of the Resistance, which places guests in the middle of a battle between the First Order and the Resistance, later in the year. Visitors will also be able to visit a street market in Black Spire Outpost, and encounter characters such as BB8, Chewbacca and Kylo Ren.

Neighbouring Disney California Adventure Park has also opened an area called Pixar Pier, with neighbourhoods inspired by Pixar’s The Incredibles (home to the thrilling Incredicoaster), Toy Story, Inside Out and other Pixar stories. A new super hero-themed land will also open where A Bug’s Land used to be next year, with an Avengers-themed rollercoaster and an interactive Spider-Man screen attraction to join the popular Guardians of the Galaxy – Mission: BREAKOUT! ride.

Knott’s Berry Farm, at nearby Buena Park, also has a new HangTime rollercoaster, which has a speed of more than 90km per hour and the steepest drop in California at 96 degrees. It is also revamping its rapids ride in time for summer and renaming it Calico River Rapids.

There’s no shortage of places to stay in Anaheim, with the city boasting more than 150 hotels, and more popping up all the time. Set to open in summer, Cambria Hotel & Suites will have 352 family-friendly rooms and suites, a large waterpark, an outdoor movie wall, arcade and a putting green. The 466-room JW Marriott is also due to open next to the outdoor shopping centre, Anaheim GardenWalk, later this year or early next year. It will be followed by the 613-room Westin Anaheim Resort, which will have three restaurants and two bars, including a rooftop lounge overlooking Disneyland’s nightly fireworks, a resort-style pool and a marketplace. A 174-room Element by Westin and a Radisson Blu hotel are also in the works, as well as plans for a 600-room Nickelodeon Hotel & Resort.

Downtown Anaheim is also being reinvigorated with new additions to Center Street Promenade. Mums will love Decades Bar and Grill – a 1980s and ‘90s-themed restaurant decorated with old movie posters and album covers, with cover bands performing on the weekend. Dads can try Japanese craft beer at the new Bizen BEER BAR, washed down with Japanese pastries and sweets from the connected Okayama Kobo Bakery & Café.

The Downtown Disney District welcomed its first brewery, Ballast Point, in January 2019. The district also has a new ice-cream shop, Salt & Straw, which serves scoops in handmade waffle cones, and an outlet of Tap Craft Burgers & Beer – known for its award-winning burgers and signature CrazyShake™ milkshakes – is set to open there soon. Farmers Park, between the Anaheim Packing House and the Packard Building, also has a new dim sum eatery called 18 Folds and a new farm-to-table restaurant called Cultivation Kitchen.

*More details about Star Wars: Galaxy’s Edge will be released in the coming months. Keep up to date at DisneyParksBlog.com, Disneyland.com.au, waltdisneyworld.com.au and StarWars.com.