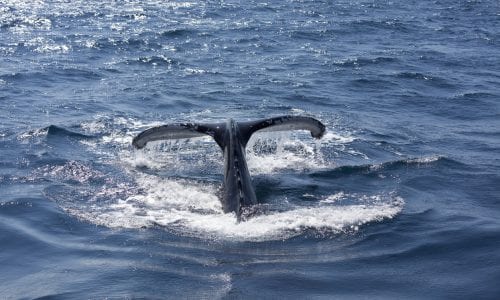 There’s something so intriguing about whales. They’re the largest creatures that simmer below sea level, yet they’re certainly not the kings of the deep. They sporadically resurface, sending up a plume of water that at once could startle relaxed passers-by but excite expectant onlookers. When you’re in Australia and want to be part of the latter, there are plenty of places to meet these friendly ocean-goers. Check out these whale-watching hot spots around Australia.

It’s said that about 20,000 humpback whales pass Port Stephens between May and August each year on their northern migration, then back again between August and September. Base yourselves at newly revamped The Anchorage – complete with a nanny service – then explore the headlands and outer islands on a three-hour whale-watching Moonshadow Cruises tour (morning or afternoon tea included).

Every winter, this town on the Southern Fleurieu Peninsula becomes home to pods of southern right whales. And since jet skis and the like are prohibited inside the Encounter Bay Restriction Zone during whale season, the only other way to see the majestic creatures is from land (the best views can be seen from Encounter Marine Park and there are some truly awesome exhibits inside South Australian Whale Centre) or on a tour with commercial operators such as The Big Duck Tours or Oceanic Victor.

Over the past few years, humpbacks, southern right whales, killer whales and even blue whales have frolicked in the deep blue waters off Tasmania’s rugged southern coastline. Trying to spot them from land can be quite the challenge, which is why it’s a good thing that Pennicott Wilderness Journeys offers three-hour tours, departing twice daily from Adventure Bay.

Australia’s Coral Coast boasts all of the ecology that whale sharks adore. Growing up to 16 metres in length, it’s a good thing the world’s largest fish have the vast expanse of the Indian Ocean to explore. Humpbacks also abound, so hop aboard a Ningaloo Ecology Cruises glass-bottom boat to hear whale songs through a hydrophone and see deep below the wild waves.

Most Australians are in agreement that the Sydney Harbour backdrop is stunning. Add to that hundreds of playful whales and it becomes mind-blowing. Whale Watching Sydney’s three-hour sunset cruise during the first two weeks of October takes small groups just off the coast to view whales as the sun goes down and there is even a professional photographer onboard to snap the perfect shots. Younger aquatic enthusiasts will also enjoy the daytime tours run by Fantasea Cruising and Captain Cook Cruises.

Did you know that the Fraser Coast is the only actual stopover destination for humpbacks on their migration route? In fact, they often spend up to 10 days in Hervey Bay between July and November. It’s not surprising, then, that local businesses have capitalised on the special visitors; Blue Dolphin Marine Tours, Spirit of Hervey Bay and Tasman Venture are just a few of the companies taking keen whale-spotters out to their playground.

Between May and October, female southern right whales set up camp in the sheltered waters of Lady Bay – along the famed Great Ocean Road – to give birth and raise their calves in an environment that becomes a protected playground. It’s best to watch them frolic from land, on the built-for-purpose Logan Beach Whale Watching Platform between the dunes.

Most families head to this South Coast New South Wales town for the famed Blowhole or Kiama Ice-Creamery’s ‘Kitchen Sink’, but they should really time it to coincide with their visit with the annual humpback migration coming north from Antarctica from May to November. The best vantage points on land can be found along Kiama Coast Walk: Blowhole Point, Bombo Headland, Marsden Headland, Minnamurra Whale-Watching Platform and Black Head Reserve. Prefer to be on the water? Don’t be fooled by the name of local company Dolphin Watch Cruises – they meet with many a larger mammal when out and about.

In the July school holidays, Phillip Island – a year-round popular day trip from Melbourne – plays host to the Island Whale Festival. To celebrate the migration of humpback and southern right whales through the area, there are three days of whale-spotting, photography workshops and interactive exhibits. If you’ve ever wanted to know what it’s like to be inside the belly of a whale, you know where to book your next break. Just can’t fit it in mid-year? Whenever you go, just follow the Bass Coast Whale Discovery Trail from the foreboding Eagles Nest rock formation to the township of Cowes to spot whales from some of the best vantage points in the region, such as Cape Woolamai and Pyramid Rock.

Which Hawaiian Island is Right for You?