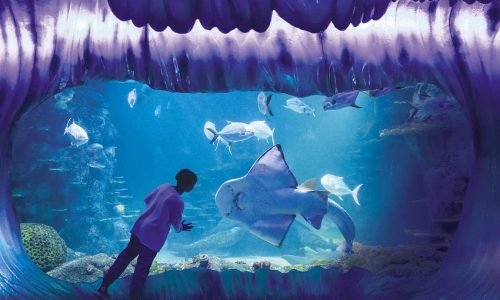 SEA LIFE Sydney Aquarium is one of Sydney’s most popular attractions. Visit today to see Bowie the rescued shark ray in the Day and Night on the Reef exhibit.

Is it a shark? Is it a ray? No, it’s a shark ray! One of the most mesmerising animals in the Day and Night on the Reef exhibit at SEA LIFE Sydney Aquarium, Bowie the rescued shark ray’s impressive flat round snout captures guests as it sweeps past. Although sharing a resemblance with, and often mistaken for, a shark, Bowie distinguishes herself from her Selachimorpha cousins by wearing her gills on the underside of her body (sharks have them on their necks), blinking through googly eyes, and proudly showing off large horns on the bony ridges of her head.

She’s one of 500 marine creatures in the aquarium’s newest and largest zone, a 1.7 million litre display which uses state-of-the-art technology to capture the smells, sights and sounds of the UNESCO World Heritage-listed Great Barrier Reef. The display is also home to an eye-catching large tooth sawfish, 1.6m-long Queensland groper, and the more discreet cleaner wrasse.

Rescued loggerhead and green sea turtles Dave, Chong, Myrtle and Plugga are among the most admired creatures within the exhibit thanks to their impressive size, while the three leopard sharks Kiah, Zimba and Johann command attention with their striking stripes and spots designed to confuse predators.