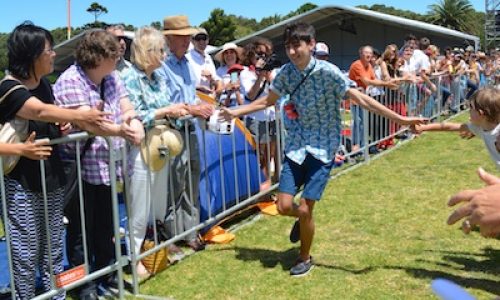 Elisa Elwin brings you all the best from Trop Jr December 2013.

…and the Trop Jr December 2013 winner is … 15 year old Adrian Di Salle with his short film ‘The Adventures of Lucy’. This avid young filmmaker has submitted four entries to win first prize in his last eligible year of entry in the under 15s segment of the worlds largest short film festival Tropfest.

Adrian was, of course, thrilled to be recognised for his whimsical tale of Lucy and the world of paper she inhabits. His mum and the young star of his film were there proudly supporting him as he was the centre of a media frenzy, a huge kick start to his career with a $5000 cash prize, courtesy of Trop Jr, plus Monster Npulse headphones and a Disney Infinity pack.

The four judges, who spent the day at the Trop Jr competition, were gorgeous and talented young Australian actress Ashleigh Cummings from ‘Tomorrow When the War Began’; actor, musician and dancer extraordinaire Keiynan Lonsdale and Nickelodeon’s Luke and Wyatt! All were unanimous in their selection and acknowledged the tough choice with the high calibre of all finalists.

Second prize went, deservedly, to 15 year-old filmmaker Oliver Levi-Malouf for his short, “Penelope’s Penguin”. A quirky story about teen peer group pressure – heart warming, insightful and funny. Oliver will be a talent to be reckoned with.

Conor Jamieson, who is also 15, earned third prize honours for his film, “Eyes”. He took the stimulus of ‘Monster’ literally and his film was peppered with scary images of a world slowly infected with red horror eyes.

One of the scariest films in the competition!

Out & About with Kids is proud to announce its continuing role in 2014 as exclusive Media Partners for Trop Jr.

In December 2014 we will bring you all the inside news when we cover next year’s budding talent using the stimulus “Fly”.

Elisa Elwin is a Publisher, Travel Writer, Social Worker and parent to 2 teenage daughters Sam & Tori. With family far and wide, they visit and spread their wings a couple of times a year.

Travelling Europe by train with kids