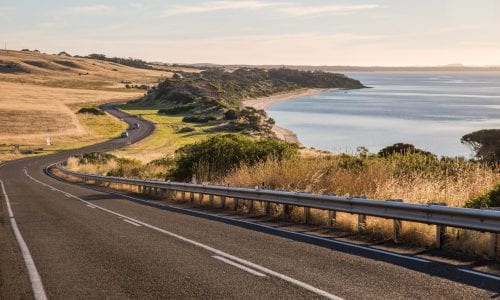 A drive around South Australia’s wild and rugged Kangaroo Island is a wildlife safari in your own backyard. Close to half of the island is either natural bushland or national park, and even though it was impacted by the bushfires earlier this year it is still home to some of the most diverse wildlife you will find concentrated in one area anywhere in Australia – fur seals, rare Australian sea lions, koalas, kangaroos, 254 species of birdlife and plenty of tammar wallabies. If you can’t spot wildlife here, then you simply aren’t trying. Older kids will also enjoy sandboarding the dunes of the Little Sahara and swimming with dolphins, and the whole family will love the honey ice cream at Clifford’s Honey Farm.

West of Sydney, beyond the sandstone curtain of the Blue Mountains, is a region jam-packed with historic gold-rush ghost towns, fascinating museums like the Old Dubbo Gaol and the famous Dish at Parkes, Japanese gardens, Wellington caves and an amazing zoo at Dubbo, where you can camp out overnight. All these make this a great drive to do with kids, while the award-winning food and wine of the region make it just as enticing for adults. Accommodation in smaller towns is good value, and any money you spend will help drought affected locals. The distances between towns are reasonably short as well, which is always a bonus when you have a back seat full of kids.

Most people think of food and wine when they think of the Yarra Valley, but there are plenty of things to do that don’t involve eating and drinking, with wildlife, art and ferny forests topping the list. The kids will love a ride on Puffing Billy, a century-old steam train that winds through the rainforest. They also love Healesville Sanctuary, where highlights include bird of prey flight demonstrations, a daily reptile show and the ‘platypusary’, where you can tickle Australia’s most elusive monotreme on a ‘wade with platypus tour’.

Take the kids to Canberra and introduce them to sporting legends, Australian icons, dinosaurs, astronauts, rock art and wild kangaroos. A holiday in Canberra visiting its amazing range of museums and family friendly attractions is a great thing to do with kids. Break the three-hour journey with a stop at the NSW Rail Museum at Thirlmere, or the International Cricket Hall of Fame in Bowral.

There are lots of reasons why the idea of taking the kids on a road trip through outback Queensland can be a scary proposition – distances between attractions are vast by bored-kid-in-the-back-seat-standards, and there is quite a lot of driving with not much to see and do along the way (an average of two hours between towns). But don’t let that put you off, because this is a place kids will love. Follow the dinosaur trail from Winton to Richmond and uncover dinosaur skeletons, fossilised dinosaur stampede sites, and even have a go at free fossil hunting near Richmond – you never know what you will find. In Longreach, you can walk on the wing of a 747 aircraft, ride a Cobb and Co. stagecoach at full gallop, watch cowboy stunt riders in action and spend hours playing with the interactive exhibits at the Australian Stockman’s Hall of Fame.

This is an edited extract of Ultimate Road Trips: Australia by Lee Atkinson, which highlights 40 of the best driving holidays around the country. Published by Hardie Grant, it’s available wherever good books are sold. RRP $39.99.

Which Hawaiian Island is Right for You?