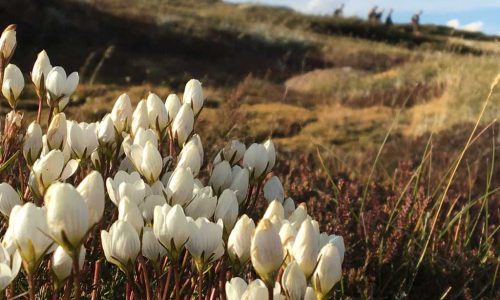 No snow in The Snowy Mountains?  No problem.

OAWK » Uncategorized » No snow in The Snowy Mountains?  No problem.

“The Snowy Mountains when there’s no snow; what’s the point?” said my teens when offered a mini break outside the peak winter season.  And to be honest, as a family whose favourite-shared activity is skiing, the thought of visiting a ski resort in the off-season did feel slightly off kilter.  But always up for anything new we gamely set off with family friends to experience what Kosciuszko National Park has to offer beyond the snow-capped winter months. 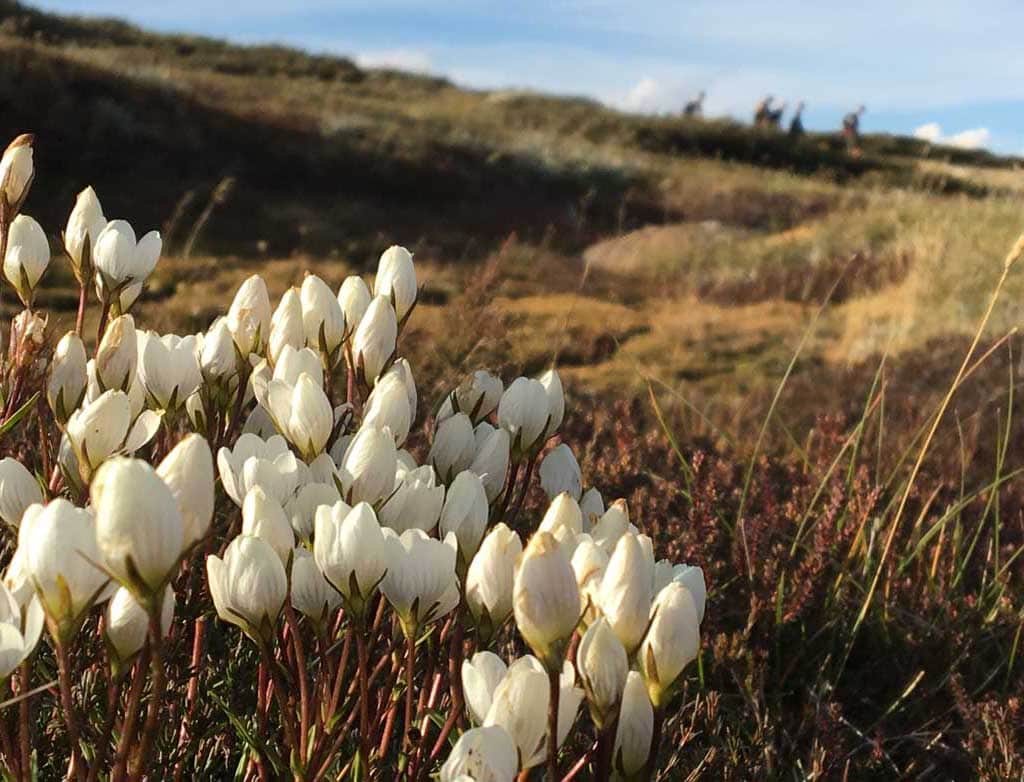 Our base for the week is Charlotte Pass, a small village just beyond Perisher named after Charlotte Adams who in 1881 was the first European woman to climb Mount Kosciuszko.  As the original and highest Aussie ski resort, the village is completely snowbound in winter and accessible only by over-snow transport.  But this Easter we have none of the winter logistical challenges of getting to the resort and drive directly to our accommodation, a voluminous and charming members-owned lodge called Pygmy Possum.

The accommodation at Pygmy Possum is simple yet comfortable with communal lounge, kitchen and dining rooms; there are a range of rooms and beds available to suit all families.  And whilst the teens bemoan the lack of phone signal – “What a shame” I empathize with my fingers crossed behind my back – they’re quickly distracted by the pool and table tennis tables and the apocalypse-ready storeroom with its’ ready-to-buy shelves of tinned and bottled supplies.

Goodies aside, we’re here to explore the great outdoors.  So the following day with military-style organization our group of four families totaling twenty teens and parents, descend from The Pass and head to the hills.

Like many of the guests in the village we’re here largely because of Charlotte’s prime position at the base of The Main Range.  It’s the closest village to Mount Kosciuszko and offers easy access to the myriad of mountains, walking tracks and vistas Kosciuszko National Park has to offer. 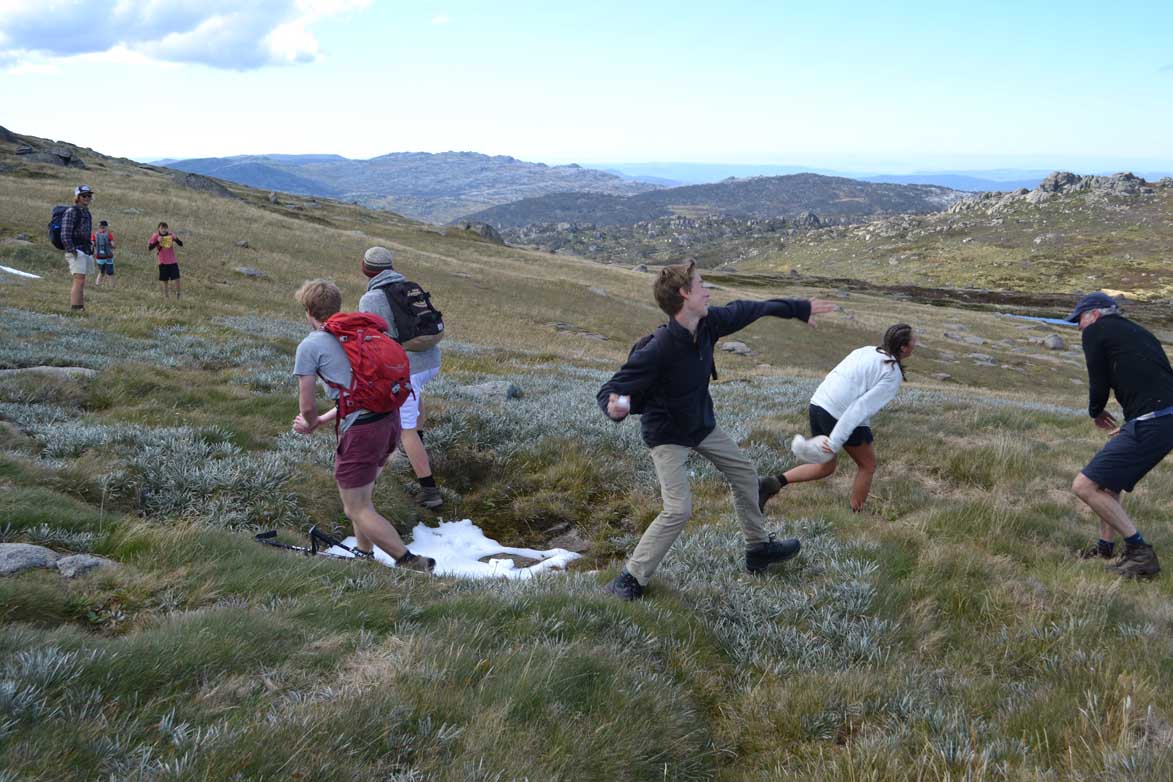 With tales of a lost-and-never-since-found hiker a couple of seasons before ringing in our ears, we’ve come well prepared.  Teens and adults alike are armed with comfy rucksacks replete with everything from wet and cold weather clothes, food and water to feed hungry teens all day, medical and emergency gear (the most experienced family even has an EPIRB or Emergency Position Indicating Radio Beacon in the event of an emergency) and the all-important snack packs which the teens competitively packed before breakfast.

Today’s destination is The Sentinel, a “mere” 10km up, down and far away; one way.  While my dormant muscles slowly wake up and limbs creak into action with each upward step, the young ‘uns rock hop lightly across the Snowy River, mastering the ascending slopes and gullies with gusto, competing to name the surrounding peaks.

The lack of phone signal prevents the usual distraction of Snapchats and Instagram updates.  And without prompting from the parents, the teens slip comfortably into an easy rhythm interspersed with unhurried conversation with each other and the oldies.  All the while easily scrambling up rocky tracks, bonding over shared fascination over the large Alpine spiders that dot the trail and grandstanding over who has the best goodies in their snack packs.

After a few hours of gentle walking, truncated by drink and snack breaks – the Mars bars and jelly snakes fast vanishing – we’re in sight of our destination The Sentinel.  The bravest and fittest of the group perilously balance across a knife-edge ridge toward the saddle of the peak.   Those who stay “to take photos” (I’m in the too scared group!) admire the top from below and take in breathtaking panoramic views over Mount Townsend and Watson’s Crag. 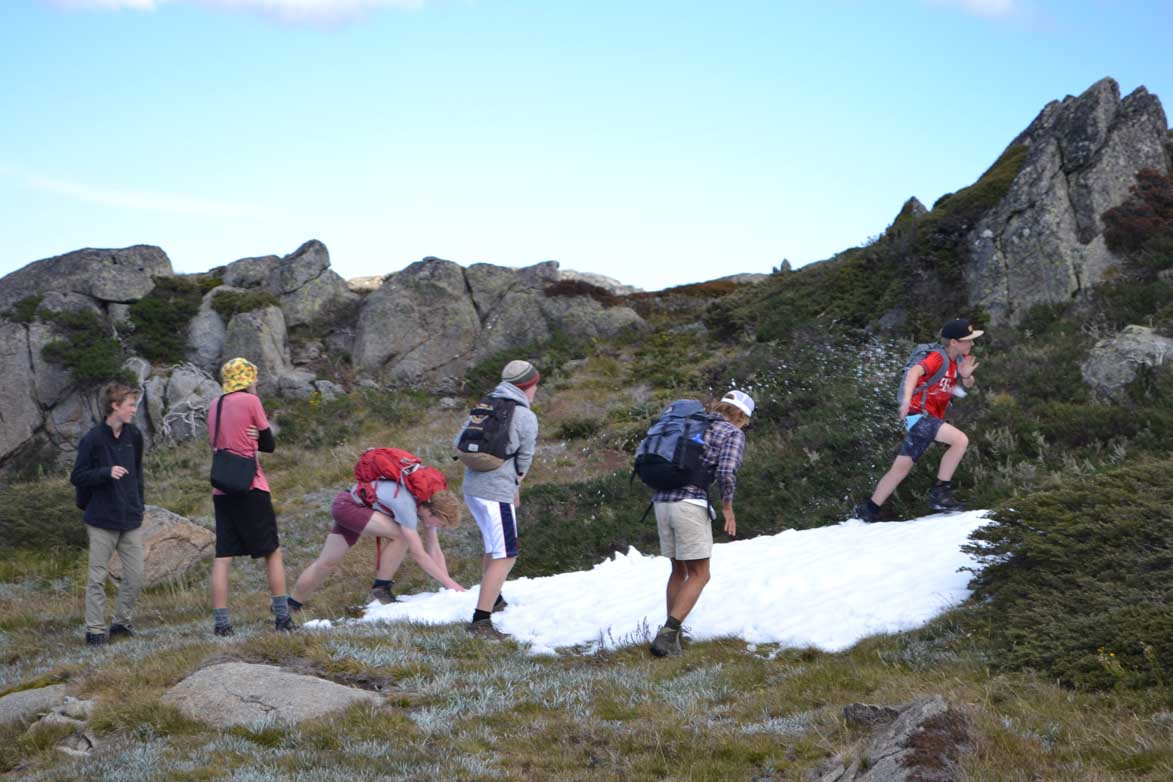 As a newbie in this non-snow weather, I’m all but tongue-tied over the verdant slopes and the waft of alpine heather in my nostrils; this from a chick who was raised in the picturesque British countryside.  The kids of course are checking for signal (none) and still competing over snack-pack remains as they race at speed to reach the top first.

The return pace provides just as relaxed and uncomplicated an environment as the outward leg.  From cerebral debate, inane chatter and fart jokes through to impromptu relationship, careers and psychology counseling, all bases are covered.  Out on the mountains there are no rules, no social pressure or fomo.  I dare not mention it aloud, but I notice that each of the ten teens is smiling or laughing. 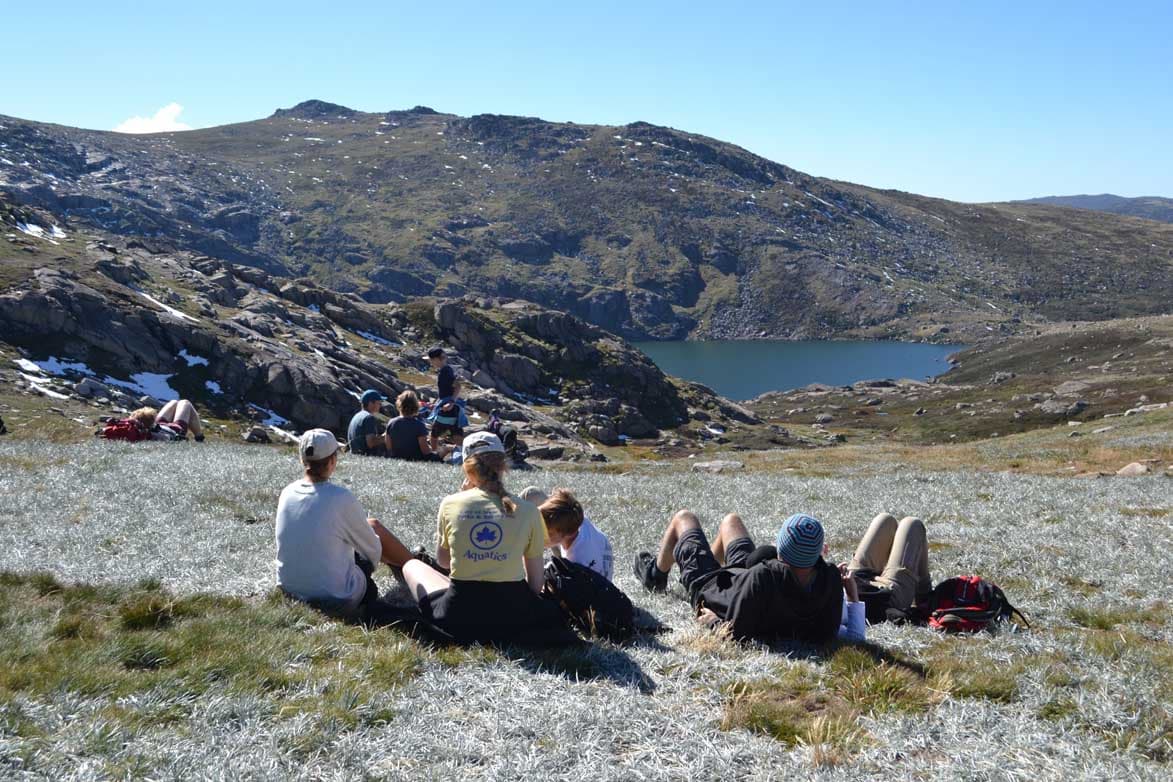 As the afternoon peters away, we’re within striking distance of “home”.  Talk turns to hot showers, which family is cooking dinner and whose turn it is for the washing up.  A table tennis tournament is planned and a debate ensues about which trashy movie we’ll watch together later.   Seven hours after we set off, not one teen bemoans the lack of signal, the enforced family time or the communal elements of a long and physical day.

Before we cross back across the Snowy River and up to Charlotte Pass, a patch of crisp white snow, a stubborn leftover from last week’s surprise dusting, piques everyone’s interest.  Balls are quickly rolled, targets identified and amongst high volume battle cries, a snowball fight of giant proportion ensues.  Proof that even when there is “no snow”, there’s always some snow to be found in alpine Kosciuszko.

And whilst the parents ache with exhaustion and dream of a lie-in the following day, the kids insist we take to the trails the following day so the snow fights can continue in earnest.  And who knows, we might bags another few peaks.