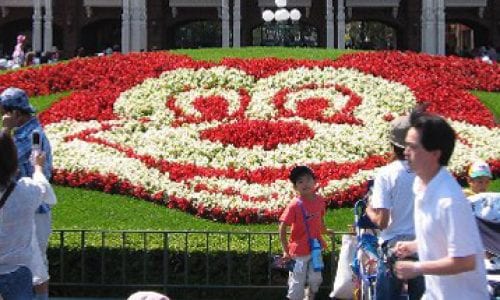 The happiest place in Toyko

This Disneyland is every bit as Disney as you could want, writes Deborah Dickson-Smith, but it’s closeness to the rich Japanese culture on offer in Tokyo city makes for an awesome experience for families.

I’m a kid again, grinning with delight at the Mickey Mouse-shaped muffins in the bakery window in the lobby. I’ve been playing a game of ‘spot the mouse ears’ since I got here, and I’m not tiring of it yet.

They’re everywhere. In my room the carpet, curtains, bedspreads, ceiling and wallpaper, bathrobe and slippers all brandish the famous ears. And don’t get me started on the toiletries – Goofy toothbrush, Donald Duck razor, shampoo and shower gel with mouse ears. They were even everywhere on the courtesy bus on the way here.

We are staying at the Ambassador Hotel, one of nine official hotels at Tokyo Disney Resort. Located next to the Ikspiari shopping centre and a short shuttle to the parks, it’s a splendid art deco-style hotel currently celebrating its 10-year anniversary.

There are now three Disneyland resorts outside the USA (the other two are in Paris and Hong Kong). Tokyo, however, was the first. On the surface it looks the same as the others, but there are subtle differences which make it all the more interesting. For one, the largely Japanese clientele get dressed up for the occasion – in matching outfits.

Large groups of teenagers walk around with a range of mouse ears and froufrou skirts, and even couples in their twenties wear matching ears

There are entire mothers’ groups here with matching children dressed up as Mickey and Minnie or Donald and Daisy. And the dress-ups are not limited to the kids either. Large groups of teenagers walk around with a range of mouse ears and froufrou skirts, and even couples in their twenties wear matching ears.

Here we scare ourselves silly on the Tower of Terror, Journey to the Centre of the Earth and Stormrider, before spending a pleasant lunch watching the spectacular Legends of Mythica show in Mediterranean Harbour. Think fire-breathing dragons, unicorns, hundreds of performers, synchronised kites and jet skis and then, just when you’re sure it can’t get more over the top, the fireworks start.

For the littlies, Mermaid Lagoon is a must and, being underground, a welcome relief from the midday sun.  There are plenty of places to eat, including the Sailing Day Buffet where you’ll find a great range of kid-friendly food including mouse-shaped pancakes, pizzas and hash browns.