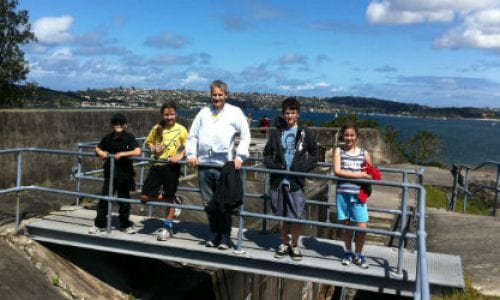 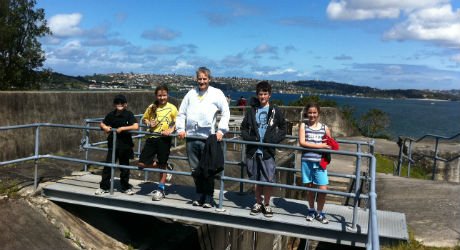 The summer holidays are almost upon us – six whole weeks in which to juggle work and entertain kids without breaking the bank and managing to afford Christmas along the way. Not easy, so here are some tips.

That may sound obvious but think of how many things you can do with kids outdoors that don’t cost money. Your nearest beach or your nearest park can occupy kids for at least half a day as long as you take along food supplies, drink bottles and maybe a football, cricket set or even a Frisbee.

To mix things up try visiting one of the many Harbour-side national parks and memorials, like North Head or the old fort and tunnels at Middle Head. Make more fun of the tunnels with a game of 44 Home (exhausting, but your children will love you).

Don your helmet and dust off the pushbikes.

Sydney now has oodles of bikes paths, so pick your route (and make sure there are not too many hills). Sydney Olympic Park is a great place to start – especially for inexperienced riders because it has wide smooth bike tracks and there’s hardly any traffic.

There are three circuits to choose from, including the 8km Olympic Circuit and the Parklands Circuit which begins in Bicentennial Park and continues past Lake Belvedere and over the Badu Mangroves boardwalk.

Manly is also a good place for kids, with bike paths along the length of the beach, all the way past Queenscliff Lagoon and in the other direction up to North Head.

There will always be a few rainy days over the summer holidays and it’s no secret that there are plenty of museums and aquariums in Sydney to keep kids happy for the day.

Sydney Aquarium is one of the world’s best, with beautiful exhibits of Australian marine life with loads of interactive educational displays. It’s located conveniently next to Wildlife Sydney so it’s a good idea to get a pass that covers both attractions. A 30 minute ferry ride will take you to its sister aquarium, Oceanworld in Manly and although its smaller it’s more intimate and very kid-friendly.

On the other side of Darling Harbour are two more great Sydney museums: The Maritime Museum and the Powerhouse. As well as some great regular exhibits all of these attractions have school holiday activities on offer.

The entry prices to most Sydney attractions are reasonable and my best advice on saving money would be to take your own lunch and avoid the gift shops.

Get out into the garden and plant a veggie patch. Gardening is great for kids – they can learn new skills and have fun – especially when they grow an edible garden.

It shouldn’t be too difficult to get kids interested in growing things – keeping them interested may be the challenge (weeding, watering…etc). Here are a few pointers…

Give the kids their own garden space – it doesn’t have to be big, it can even start in a large container. Encourage them to get dirty, grow interesting (and fast-growing) plants like sunflowers, corn, pumpkins, tomatoes and strawberries, make a scarecrow and set up a worm farm.

Easier said than done I suppose and even when you can walk to the local shops for groceries it’s hard to avoid taking the car out at least once a day. Kids have their own social agendas after all so there’s always going to be the essential taxi service requirement to friends’ houses for sleepovers and play dates.

Living (as most Australian do) in the suburbs – even if you have three kids – it’s really not essential to own a massive gas-guzzling 4-wheel drive vehicle. Trade it in for a smaller model – better still a smaller diesel or hybrid vehicle.

I tried out the new Ford Focus during the Spring holidays and even with a couple of trips a day – to the shops, to the beach, to the many friends’ houses and to the shops again because I forgot something – I only managed to use half a tank of fuel in a week. And it’s much easier to park than your average 4-wheel-drive tank.

Deborah Dickson-Smith’s first trip with her first child (at 4 months old) involved a 26 hour flight with no sleep, which is round-about when she realised travelling with kids wasn’t quite the same as without. Deborah has lived in Singapore, Kuala Lumpur, Edinburgh, London and now resides in Sydney’s northern beaches with her Brady Bunch-style family of seven – all seasoned travellers.