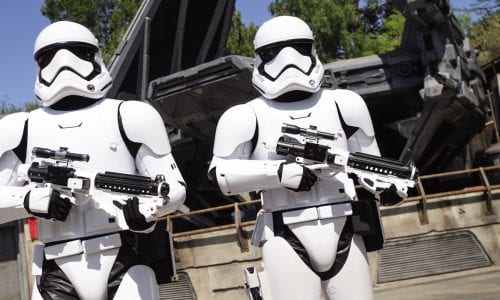 “She may not look like much, but she’s got it where it counts”. Ever since Han Solo uttered the immortal line in the original 1977 Star Wars blockbuster, the Millennium Falcon has held a special place in the hearts of fans. Now, they can get behind the controls of the much-loved starship in the highly-anticipated new Star Wars-themed land at Disneyland Park in California. Star Wars: Galaxy’s Edge opened in late May at a spectacular event attended by Star Wars icons including creator George Lucas and stars Harrison Ford and Mark Hamill. The largest and most technologically advanced single-themed land expansion ever in a Disney park, Star Wars: Galaxy’s Edge stretches across more than 5ha. Guests can explore the remote planet of Batuu, sampling galactic food and beverages and perusing eclectic merchant shops before stepping aboard Millennium Falcon: Smugglers Run.

Star Wars: Galaxy’s Edge is set on a planet never before seen in the Star Wars universe to give everyone a chance to step into the story at their own level – whether they are a lifelong fan or have never seen a Star Wars film. The land was designed with sightlines that evoke cinematic angles. Guests begin with views of wide vistas, then as they explore deeper into the land, their field of vision narrows into tighter spaces – like zooming in for a close-up. In developing props and other décor for the land, Imagineers also tried wherever possible to use pre-1980 materials to best capture the look and feel of the first movie, Star Wars: A New Hope, which was released in 1977.

Following the events of Star Wars: The Last Jedi, Chewbacca brings the Falcon to Black Spire Outpost for repairs at this spaceport, on the edge of the galaxy. In exchange for some much-needed replacement parts, Chewie loans the Falcon to smuggler Hondo Ohnaka. It is at this point that guests 96.5cm or taller enter the story of Millennium Falcon: Smugglers Run and settle into the cockpit to operate “the fastest hunk of junk in the galaxy”.

Star Wars: Galaxy’s Edge is also the first land within a Disney park designed to integrate with the Play Disney Parks mobile app, in which guests can choose to aid a smuggler, join the Resistance or pledge their loyalty to the First Order.

In phase two, opening later this year, guests will also be able to take part in a climactic battle between the First Order and the Resistance in Star Wars: Rise of the Resistance. A near-identical Star Wars: Galaxy’s Edge will also open at Disney’s Hollywood Studios at Walt Disney World Resort in Florida on August 29.