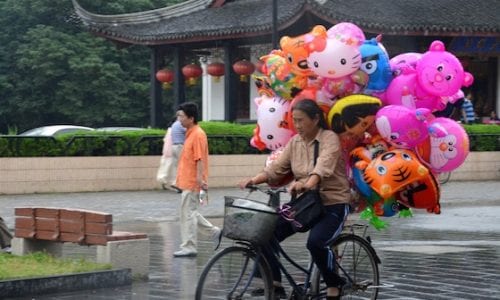 High-flying capital of commerce and centuries-old city full of exotic appeal, is Shanghai kid-friendly? Absolutely. This urban playground is a winner for every age, writes Aleney de Winter. 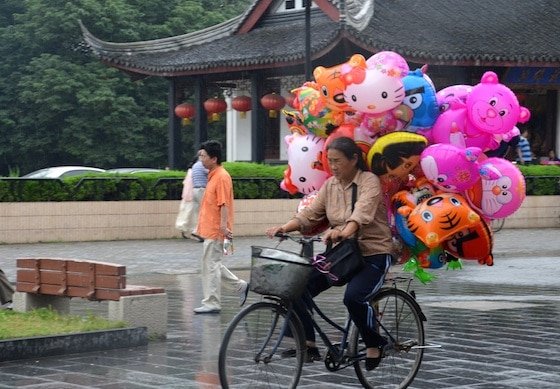 In a city best known for its tangle of cloud-bursting skyscrapers and heaving population, we’re surprised to find ourselves surrounded by a great expanse of leafy green. Shanghai’s People’s Square is home to museums, theatres and even a small amusement park with whirling rides. But its most attractive feature is space. Perfect for little feet to run, jump and even chase a low-flying kite. Today, it’s also a starting place for bigger adventures.

At least it would be were I not distracted by the seductive sparkle of shopping bags. I am lured by an unseen shopping force to nearby Ni Hong Children’s Market. If you like your kids gear cheap and cheerful, this is the place. We squander roughly thirty bucks on bags of new clothes and plastic toys before hitting Nanjing Road. The city’s major shopping artery, it’s positively pulsing with people scurrying in and out of department stores and boutiques. It’s also our route to The Bund.

Running alongside the industrious Huangpu River, The Bund is an architectural melting pot. A little Neo-Classical, a little Gothic and a lot Art Deco, it’s wholly beautiful. It’s also the perfect spot to view the futuristic skyline of the Pudong district, all space-age towers and skyscrapers that won’t fail to impress even little visitors. Raff is awed by the “giant rocket-ship”, better known as Pudong’s Oriental Pearl TV Tower, and crossing the Huangpu to climb it becomes priority number one. 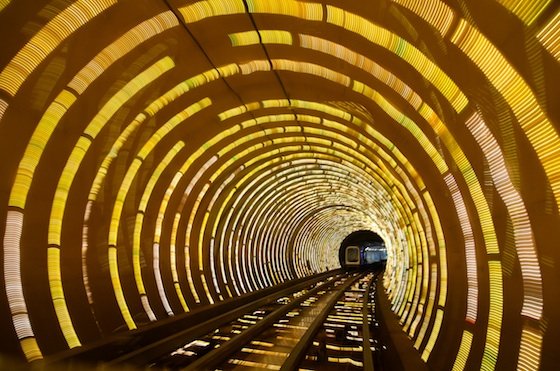 The Bund Tourist Tunnel takes us there in sci-fi style. So groovy is the ride through a tunnel of psychedelic lights that we’re made to go back and do it all over before permission is granted for us to alight in the Pudong district and the base of the “rocket-ship”. When we explain we’ll be catching a lift to the top of the 350-metre tower Raff insists he is climbing up the outside. “You can put glue on my hands and feet. It’s easy… Spiderman does it all the time!”

Right! He reluctantly follows us to the more mundane lift which zooms us to the observation deck without need of arachnid superpowers. The endless view of the sprawling city is awesome and Marlo particularly is keen to freak out her mother as she casually lolls right against the glass for a better look.

Neighbouring Jin Mao Tower is even taller at a staggering 420 metres. So high that its summit has disappeared into the clouds, Raff is convinced it’s a modern day “Jack’s beanstalk” and wary of giants decides instead on a visit to the nearby Shanghai Science & Technology Museum. This phenomenal interactive space is designed for kids but it does the trick for mum and dad too. There are robots, an indoor rainforest and even space-training. And pre-school jungle gyms and crawling tunnels means Miss Marlo loves it too.

Back at the Bund a neon glow envelops the city as the sun sets. Looking east from the promenade and across the river at the high density wall of flashing light and then back to the golden glow of buildings from a more refined era is like being in two cities at once. 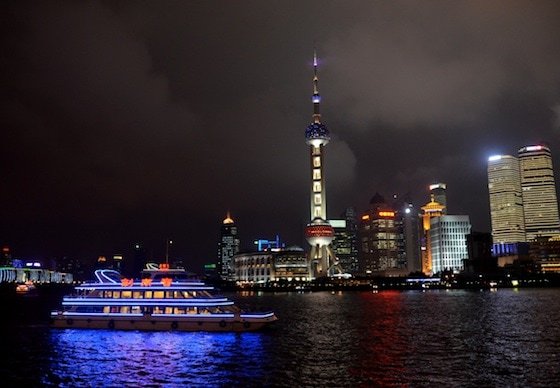 It’s here we have our first Brad and Angelina moment (without the money or the insane good looks). With their light hair, curls and big blue eyes, our little tourists become the attraction as people literally queue for a snap. At first we find the “paps” a little overwhelming but the intent is sweet and the kids soon take their new-found superstar status in stride, Raff learning to keep his fans happy with a smile and a casual “ni hao” (hello) while Marlo, lapping up the love, waves to the crowds like she’s a member of the British monarchy.

There’s plenty of family-friendly accommodation in Shanghai, from self-catering to five-star. We’re staying at the Pullman Skyway. A two-minute walk from Metro line 9 (the Shanghai metro is the cheapest, most efficient and clean I’ve come across) getting around is a breeze. The upscale 52-storey five star hotel has a relaxed vibe and enormous rooms with spectacular views. We stay in one of the well-appointed suites where the kids have plenty of space to totter about and play. But the biggest plus of this hotel is an unexpected one, its garden. As well as resident geese in the pond, there’s a generous patch of green where the kids can run free. The little hit of nature is revitalising. 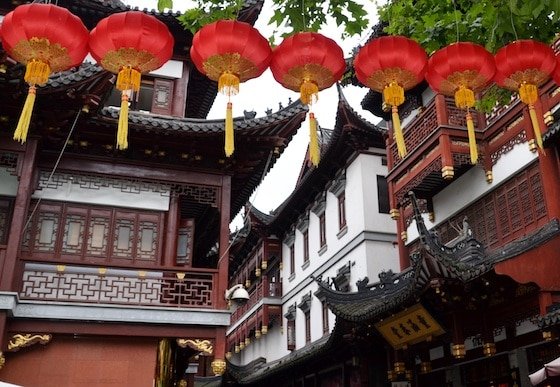 Our base also encourages us to explore more than just the obvious tourist spots. Our favourite find, hidden away behind a shopping plaza, is a delightful slice of Old Shanghai. Tianzifang is a bohemian area of traditional shikumen houses in ancient laneways, each a chaotic jumble of fairy lights and lanterns bursting with tiny bars, galleries and boutiques. It’s utterly enchanting and, though a tad pokey for our pram, we still manage to lose hours wandering through its alleys.

The Pullman Skyway offers excellent family-friendly dining and the breakfast buffet not only serves up great food but is a place of discovery. Who knew a four year old could eat a bowl of muesli, noodle soup, a bean bun and 13 shumai (dim sim) before 9am?

Eating in Shanghai with children is easy. What kid doesn’t love fried rice, spring rolls or a stir fry? If yours have a stubbornly western palate there’s a proliferation of McDonalds, KFC’s and Pizza Huts, which we bypass. 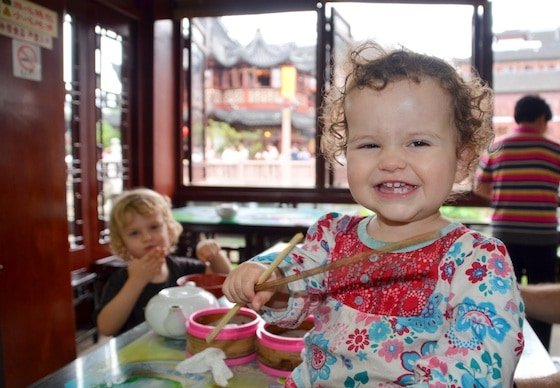 In the evenings we visit eateries scattered around the hotel. Generally, we’re the only westerners but we’re treated like old friends as we stuff ourselves with authentic food. We all, from toddler up, form an addiction to xiao long bao (glorious steamed parcels of pork filled with a gelatinous gingery broth). Raff calls them “little mouth volcanoes” shouting “fire in the hole” before gulping them down and sets himself a mission to eat Shanghai out of them.

Another treat Raff finds hard to resist are the zongzi, a traditional food made of glutinous rice stuffed with pork and egg yolk steamed in bamboo leaves. The best we find are in Zhujiajiao, an ancient water town we visit on a day-trip with Helen Wong’s Tours.

This lovely town is a series of interconnecting canals where we cruise in a gondola (Chinese style) under the town’s 37 arched stone bridges past old buildings dating back to the Ming and Qing dynasties. Off the water, the ancient streets are lined with shops, restaurants and teahouses, some a little touristy while others home to local residents. Over another sensational meal our guide is able to fill us in on the region’s colourful history and share a few personal tips on Shanghai’s best attractions. 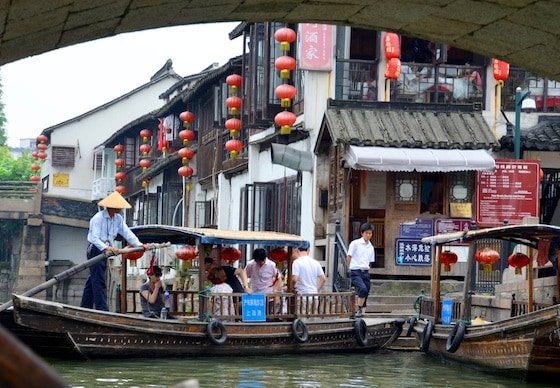 Top on her list is an acrobatic show which is how we find ourselves staring slack-jawed as the pretzel like performers at Shanghai Circus World twist themselves inside-out and catapult themselves through the air. Raff valiantly tries to stay awake through the lengthy performance but we miss the end, our sleepy son adamant that tomorrow he’ll personally recreate the show for us.

After the frenetic pace of the past few days we soothe our souls at the Longhua Temple and Pagoda, Shanghai’s oldest. One doesn’t expect a toddler and a pre-schooler to understand the sanctity of such a place but somehow they get that it’s time for quiet. We amble through halls heaving with intricate golden statues as the sound of chanting monks reverberates around the grounds. It is one of those perfect holiday moments and we leave the temple a little more at peace. 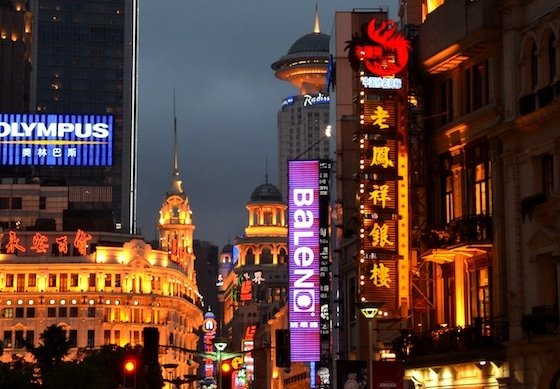 We spend the afternoon at centuries-old Yuyuan Gardens and enjoy a further taste of classical Shanghai. Pathways and pavilions, elaborate rockeries, bold red temples resplendent with ornate Ming lions and flamboyant dragons sit alongside ancient teahouses and pretty ponds swelling with hungry carp. The kids love it. It could be the fish, it might be the wealth of nooks and crannies to play hide and seek but more likely it’s that it reminds Raff “of Kung Fu Panda’s place”. The super-sized toy shop at its entrance doesn’t hurt either.

We arrived by sea but are leaving by air and getting to an airport has never proved so fast or fun. The Maglev, a 267-mph magnetic levitation train, hurtles us from the city centre to Pudong International Airport, about 30 kilometres away, in just eight-minutes. It’s not a great way to take in the scenery, which is reduced to a blur, but it is quite literally a rush for small (and big) boys who love their machines fast and flashy.

Shanghai has proved to be the ultimate in travel surprises. A buzzing metropolis that’s home to 23 million people and a superfluity of skyscrapers yet is clean, easy to get around, friendly and possesses an inexplicable charm that had my family at “ni hao”.