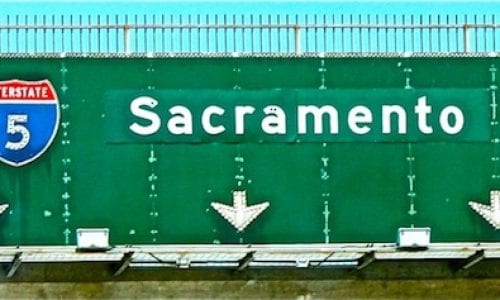 Sacramento California … All That Glitters …

Ho boys Ho, to Californ-i-oh!
There’s plenty of gold,
So I am told,
On the banks of the Sac-ra-men-to!!!

Cheerfully we sang this ’til we could sing no more… on our way to California’s State Capital, Sacramento. An even six hour straight-shot drive from Los Angeles, Sacramento is not usually the first place someone thinks of when the subject of California comes up in a conversation… let me tell you, we’ve lived in the Golden State for twenty years, and this is our maiden voyage. Now we ask ourselves… why’d we wait so long?

Our hotel, the Embassy Suites, is ideally located on the banks of the hallowed Sacramento River. In short walking distance from the beautifully maintained and iconic “Old Town” area, (in fact we arrived on a Thursday and did not need to get back in the car till Sunday when we headed back to L.A via Sutter’s Fort, brilliant!) its charm is immediate with museums, horse drawn carriages and the original cobblestoned Front St, known by the locals as “Folsom Potatoes”– they came down from the Folsom quarries when the town was a fledgling gold town.

You feel like you’re back in the 1800s. Old Sacramento town is filled with the kinds of stores than an Aussie child only dreams of – LOTS of candy in huge barrels and people offering free sample. Be ready, they are hard to resist, even Mum (Ali) who shouldn’t have sugar was talked into trying a fresh-made saltwater taffy.

You can dress up in old period costumes and have a sepia photo taken (hard to talk the 16 year old into that experience) lots of old fashion, kite and toy shops while food is the usual American fare with burgers, salads and fries on offer.

So how did Sacramento come to be…? On Jan 24, 1848, James Marshall discovered gold on the banks of the American River whilst helping to build a sawmill for his mate, John Sutter, one of the first pioneers. News of this gold discovery drew thousands from across the globe to California. Within months, hopeful miners overwhelmed Sutter’s Outpost of New Helvetia while merchants and other profiteers quickly established Sacramento City at the confluence of the Sacramento and American Rivers.

Sacramento’s strategic riverfront location was the halfway point between San Francisco and the gold fields, allowing it to become the centre for transportation and commerce in the new state of California. Whether travelling by ship or by wagon, most gold seekers found themselves passing through Sacramento. Savvy businessmen and women took advantage of the opportunity and transformed the new city into a thriving locale where miners could spend their hard earned dollars in a large selection of hotels, saloons, stores and restaurants.

Today Sacramento is a thriving metropolis, not that dissimilar to the Brisbane I knew in the 80s… with the river, lush green parks and friendly relaxed locals. Like the recent experience in riverside Brisbane, Sacramento is also a potential site of flooding. So, from the 1860s through 70s, the city streets and buildings were painstakingly raised to protect it. As a result, there is an amazing underground tour that provides visitors with a unique glimpse into this massive and dramatic undertaking. Whilst looking at the dipping alleyways and disappearing doors and windows, the guides in their period costumes educate and entertain as only American tour guides can. For tickets and info visit www.historicoldsac.org.

California’s capital, Sacramento, is also home to one of the most stunning Parliament houses you will ever see. Since 1869 and open daily for tours, The Capital Building is a work of art . Hour-long guided tours begin on the hour between 9am and 4pm. We were all in awe of this experience… River 12, wanted to stay and run around the massive halls taking pictures, he must have taken 200. Bodhi 6, loved the echoed sound of her voice as she sang whilst we looked at the different portraits of Governor’s past… Dad (Cam) particularly liked the one of Ronald Reagan, the intricate woodwork of the balusters/balustrades (carved Californian bears) and original mosaic tiled floors. We sat up in the Senate chamber’s observation deck, which has the original the seats. The building underwent a 6 year renovation in the 1970s, which was a stroke of good timing – if they wanted to do it today, they would never have the budget!

The gardens surrounding the Capital Building are also stunning, with rolling lawns, massive Magnolia trees, ponds and rose gardens… we flicked off our thongs and barefooted it back to the river for some lunch on a majestic paddle steamer. The Delta King used to run between Sacramento and San Francisco. Wealthy guests would board ship in the early evening, enjoy dinner and dancing, then sleep. By morning they would arrive in San Francisco, ready for action. Today the majestic vessel is permanently anchored and is a fully-restored 40 stateroom floating hotel, with restaurant and bar… and is home to several local theatre companies.

In a cavern, in a canyon,
Excavating for a mine,
Dwelt a miner, forty-niner
And his daughter – Clementine

After lunch we visited what is often called the best museum in the country. The California State Railroad Museum truly lives up to this reputation. After experiencing the museum, we not only got an education on how California came to be, we were walking amongst some of the most amazing exhibits. Twenty-one restored locomotives and over forty one-of-a-kind exhibits. We experienced train evolution from the first American trains of the 1850s to present day (if you’ve ever seen the movie “Night at The Museum”, your imagination is going to go wild!).

Americans have always done things big, and these massive steam-driven engines, with the iconic American smokestacks and cow-catchers, bring those old time westerns movies to life – if you appreciate Puffing Billy in Emerald, Victoria, you are going to love this. It was fascinating to know, that the rock stars of the 1850s were the engineers on these heaving behemoths!

Sacramento began with the discovery of gold. The men and women who came here to unearth their own EUREKA! were known as “forty-niners”, (since they arrived in 1849). Fans of American football will note that San Francisco named their team after these opportunistic and brave folks.

We sampled some gold panning at the Sacramento History Museum which was so much fun. Bodhi was in awe of the fool’s gold that filled her coffers, whilst Dad was bent over longer than any in the family, though he did come away with three specks of the real stuff (mind you he stayed bent over for an hour afterwards whilst smiling victoriously). Fyi- they reckon there’s still 70% of the gold in the river!

We enjoyed an excursion train ridewhich took us along the Sacramento River. You have a choice to ride in the luxury 1st class carriage, with all the amenities of the bygone era, or ride in the open carriages with fresh air and sunshine. We chose the latter and enjoyed listening to the piped music of “train” songs, rhythmic harmonicas, guitars and ol’ train lyrics from the masters of country… the experience was also enhanced by the volunteer conductors being in costume and “owning
their roles”.

From the tracks to the river itself, the Hornblower boat cruise is another treat. This was our favourite event. We went up river in the ol’ girl, to where the Sacramento and American Rivers meet. It’s pretty cool to see their differing colours converge. The icy clear blue of the American (which carries the gold), and the browns of the silty Sacramento, blend to make… more brown … but the jet skis and other water craft don’t care, it’s all water and fun to them. The American river becomes a playground in the summer for families to swim and picnic.

Sacramento is very flat, you can easily walk it or another great way to get around is by bike. There are several places to rent them, $25 for the day and you can get to all the great places. A couple of miles through the quiet leafy streets with great old homes is Sutter’s Fort Sacramento’s earliest settlement dating back to 1839. Self-guided audio tour explains the exhibit rooms which include prison, blacksmith’s shop, Sutter’s home and livestock quarters.

Sacramento has great events all year round, so it’s a prime place to visit anytime. Mardi Gras (February), St Patricks Day (March), Pacific Rim Festival (May), Sacramento Music Festival (late May), Gold Rush Days (September), World Music and Dance Festival (September) and the Theatre of Lights (Christmas) are all world class events. For the art lovers, there’s the famed Crocker Art Museum . The revheads will go crazy for the California Auto Museum with 150 exhibits including muscle and race cars, hot rods and antiques. For the little kids there’s Fairytale Town and a zoo . For sport lovers, Sacramento is home to the Sacramento Rivercats baseball team – a “triple A” team that feeds major league’s Oakland A’s. It has a great field by the river, with grassy banks in the outfield, where you can kick back on warm summer nights, with a hot dog and drink, whilst watching these guys play hard for a spot in the “bigs”.

The weather is brilliant and clear, (we did it in summer) the temperature is a dry, warm/hot (mid 30 degrees C), with caressing “delta breezes” keeping us cool. Winter temps get cold (Canberra cold), with the ski fields of Lake Tahoe and Squaw Valley close by and so easy to get to by car. San Francisco is an easy 2 hour drive away. Wine lovers will note the Lodi Wine country is also very close and is gaining a huge reputation.

Suffice it to say, we loved Sacramento. For the Aussie family travelling to California, Sacramento is perfectly situated in the middle of the state (which is one of the reasons it was chosen as the capital). When planning the big Californian trip with your kids, make Sacramento one of your stops – our three kids ages 16, 12 and 6, loved it.

A suggestion… arrive in Los Angeles, play there for a few days, get into an RV, drive up to Sacramento, spend a few days, then shoot over to Tahoe and either head down to Vegas or back across to San Francisco… actually, I think we’ll do that next and let you know how that works out!