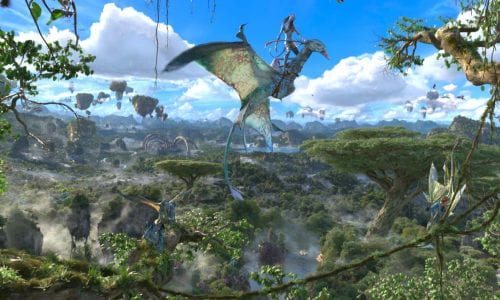 The World of Avatar wows the world

OAWK » Uncategorized » The World of Avatar wows the world

Walt Disney World in Florida’s ‘Pandora The World of Avatar’ opened in May this year, and it has literally taken the world by storm. While people are raving about the Na’vi River Journey, which takes you on a beautiful journey through the bioluminescent forest of Pandora, it’s the Flight of Passage 3D thrill ride that people are hailing as “the greatest Disney ride of all time”.

Flight of Passage mimics the experience that Avatar hero Jake Sully has in the movie, as you sit on a bike-like contraption in front of an enormous screen. Once secured on your ‘Link Seat’ you are ‘linked’ to your avatar and suddenly the screen shows the view from a Pandora cliff-side where your avatar sits atop a banshee. The scenery is incredible, and the room floods with smells and sounds that immediately bring you into the world of Pandora. The seat between your legs begins gently expanding in and out while a soft snorting sound can be heard — as if the banshee is really breathing beneath you.

The scents in the room even change and shift as you begin to fly during the ride, like when you glide beneath a wave or soar above a stampede of animals. Wind and mists of water come in at key points throughout, adding to the realism of what you’re experiencing. Your banshee flies over mountains and into caves, dukes it out with another banshee flying through the sky, and then soars straight down while ducking under branches and cliff sides.

According to Insider reviewer Kim Renfo: “The first time the banshee dives, swooping the link chair down, my heart skipped a beat and my stomach did the all-so-familiar ‘swoop’ that I normally only associate with a huge roller coaster.”

IGN Editor Eric Goldman, who went on the ride six times in one day, said: “My personal favourite part of the experience– one I involuntarily cheered out loud at – finds you flying out over the ocean and swooping right inside a massive wave as it curls around you. It’s an incredible, gasp-worthy moment among several throughout the ride.

“As a bit of a theme park junkie, it’s rare I can walk off a ride and instantly say, ‘that’s now one of my all-time favourites.’ But I feel secure saying that about Flight of Passage. It’s a new gold standard.”

Use  FASTPASS+. Flight of Passage is proving to be one of the most popular rides in Walt Disney World’s history, so to avoid waiting in line get yourself a FastPass+ or, if you’re a Disney hotel guest, hop in line during Extra Magic Hour.

Grab a middle seat. If you can, grab a middle seat as, being a 3D experience, this will give you the best view. Be sure to keep your focus ahead of you and try not to be distracted by the rides next to you as this will pull you out of the experience of the ride.