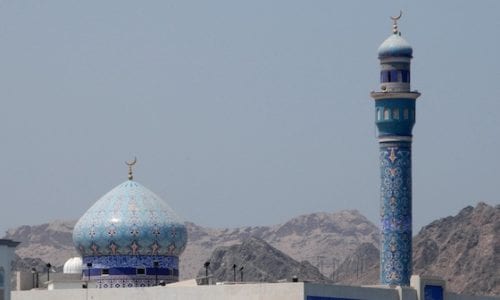 With its forts and frankincense, deserts and dhows, souks and Sinbad, Oman’s capital, Muscat, is a fairytale destination for families, writes Aleney de Winter. 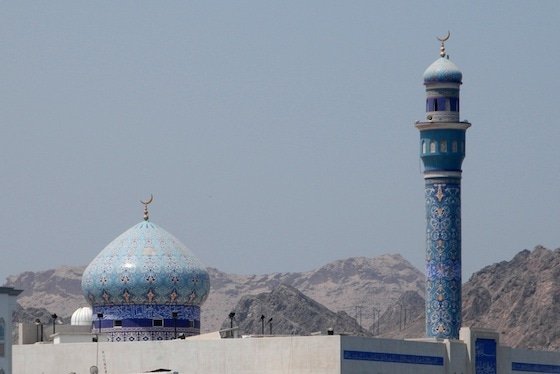 Arriving in Oman in the wee small hours – wee small children snoring as we’re taxied to our resort – we find ourselves wondering if, somehow, our flight has been diverted to a distant planet far, far away.

As dawn unveils the rugged Muscat landscape in all its otherworldly glory, we’re convinced we’re about to stumble across a Skywalker or two. Even in the shadows Muscat is breathtaking and we sense that we’re in a special place.

The feeling is confirmed as we arrive at our resort, all date palms, fortified rooftops and frankincense-fragranced air. Interplanetary imaginings aside, the Shangri-la Barr al-Jissah Resort and Spa really is out-of-this-world and, in a city bursting with opulent hotels, it is a standout.

Influenced by ancient Omani palaces, the luxurious three-hotel village is nestled between the dramatic mountain landscape and the stunning bay of Al Jissah. It’s hard to imagine a setting more dramatic or divine. Best of all we feel like we’re in another country, a vibe that can sometimes be lacking in big resorts. 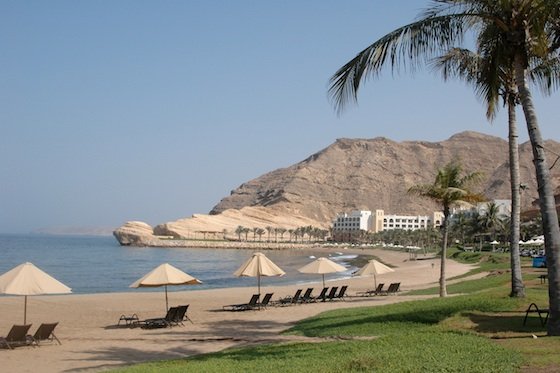 The property comprises the exclusive Al Husn (The Castle) central Al Bandar (The Town) and family-oriented Al Waha (The Oasis). Purpose-built family rooms, a kids club, childrens’ swimming pools, restaurants that serve meals with little ones in mind and even a kids check-in area in the lobby prove a hit with junior jetsetters. 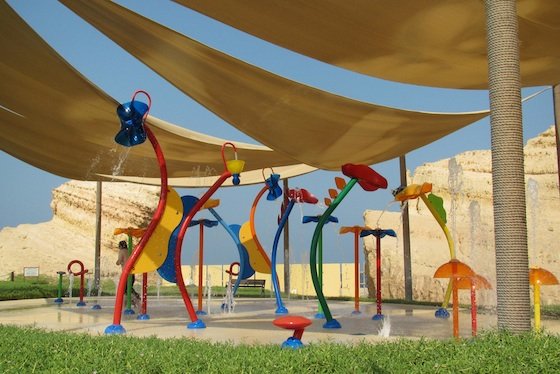 Seven-month-old Marlo loves her first taste of sand on the resort’s pristine beach which, after sundown, is handed back to some other babies. This year alone, the resort’s dedicated Turtle Ranger has helped to protect more than 150 nesting mummy turtles and nearly 10,000 rare green and hawksbill hatchlings.

Parents are not forgotten. I certainly enjoy sneaking off to the Chi spa for a quick pedi before being decorously painted with henna at the Omani Heritage Village. The resort’s own souk and the culinary journey across the resort’s superb dining venues are also vote grabbers. Feature packed though it is, service (for both turtles and humans) is where this resort really shines. A personal butler (something I could get very used to) delivers little luxuries like daily silver-service high tea. And the complimentary mini-bar and endless supply of bottled water are touches that make this resort experience a special one.

Three-year-old Raff would no doubt disagree, citing inner-tubing down the 500-metre Lazy River, frolicking amongst the fountains on the Splashpad, tumbling and sliding at the indoor Adventure Zone and riding the resort’s resident camels as the Barr al-Jissah’s stand out features. 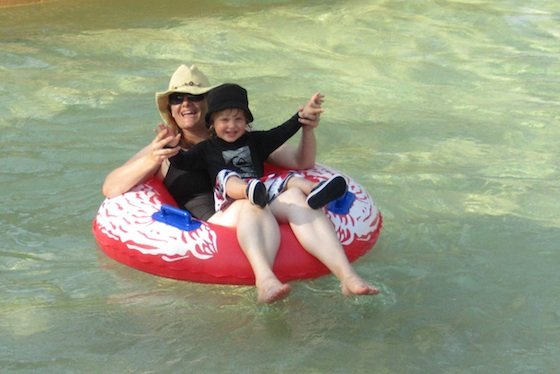 May the forts be with you

It’s time to tear ourselves away from the cool of the resort pool to explore Muscat, a low rise city peppered with old forts and traditional architecture that has rejected the mine’s-bigger-than-yours stylings of some of its neighbours for a refreshingly forward thinking approach more reverential to Oman’s natural and cultural heritage than to displays of brashness. 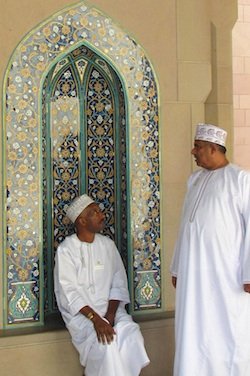 Our driver, Hassan, he of the blessedly air-conditioned car, proudly guides us around the Grand Mosque. Its towering minarets and dazzling expanses of white marble are Islamic Muscat’s crowning glory. Children under ten are not allowed in the main prayer room, so mine stay with Daddy while I am dazzled by the 4,343-square-metre hand-woven prayer carpet and eight-tonne Swarovski crystal chandelier dangling decorously from the magnificent domed ceiling.

Along the Corniche facing the harbour in Old Muscat, is Muttrah Souk. A chaotic maze of alleyways, it’s an Aladdin’s cave of treasure where Raff determinedly rubs lamp after lamp convinced that at least one must be harbouring a genie. One of the oldest preserved souks in Oman, bright bolts of fabric nestle alongside crisp white dishdashas (traditional Omani clothing) and frankincense battles sheesha tobacco in a fragrant fight.

Stunning hand-made silver jewellery proves irresistible but I also have my eye on one of the intricately beautiful, and decidedly dangerous, khanjars – the traditional dagger of Oman. So unfortunately does Raff. Struggling to convince him of the inappropriateness of a lethal weapon as a plaything for a pre-schooler, I am much relieved when I stumble across a benign replica perfectly proportioned for a small boy and his imagination. 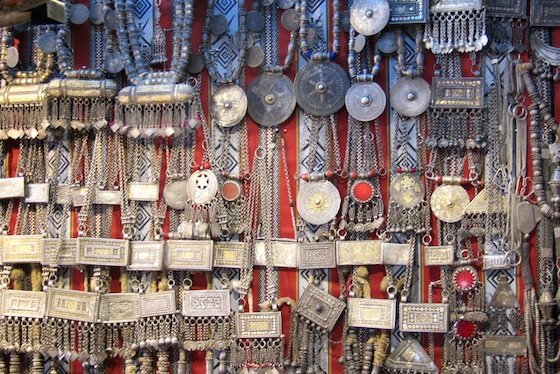 Kiddy khanjar carefully strapped to his waist, my wannabe Aladdin readies himself to take on imaginary villains, much to the amusement of the merchants in the souk. It doesn’t take a genius to work out that the locals adore children. In fact, our two are the delighted centre of attention wherever we go. Marlo, in particular, is spirited off for cuddles at every turn and never once do we worry, so genuinely sweet is the intent.

There is plenty more to explore but it is hot and the little ones are growing restless so after a visit to the Sultan’s Palace, its quirky ’70s style and pillars of turquoise and gold a stark contrast to the centuries-old Portuguese forts of Al-Jalali and Al-Mirani that flank it, Hassan kindly takes us back to the resort.

There’s just enough time for a refreshing afternoon dip and another sunset ride for my camel loving loon before an evening dining on delicious mezzeh (a Middle Eastern platter) under the stars, Raff dancing merrily to a live soundtrack of traditional Omani tunes. 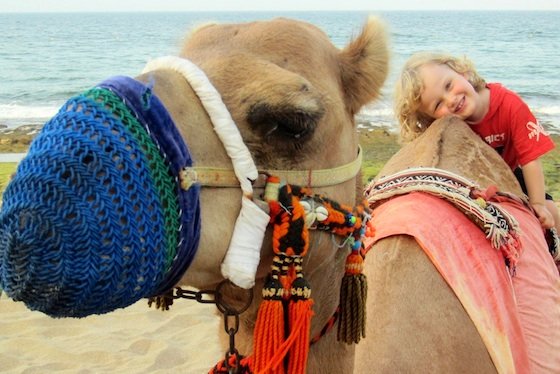 We have only one more day to enjoy Muscat, and after a terribly busy morning floating along the resorts Lazy River between the pool and the Splashpad, decide to take a tranquil cruise along the coastline. Boarding a wooden dhow (traditional Arab boat) an excited Raff, now channeling local legend Sinbad, is keen to fend off any sea monsters that might lie in wait. 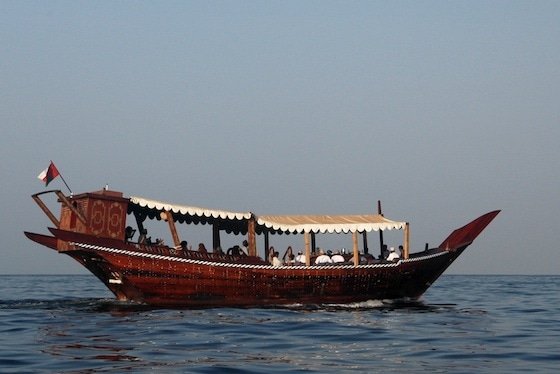 The vista from sea to shore beguiles as the fading afternoon sun bounces off the ancient forts and watchtowers jutting randomly from craggy coves. Luckily, sea monsters are in short order and instead find ourselves surrounded by dolphins. Literally hundreds of them and their calves (or “dolphettes” as they are dubbed by the little man) leap exuberantly about us. The captain of our boat kindly stops and lets us enjoy the spectacle as the sun sets on another perfect day. 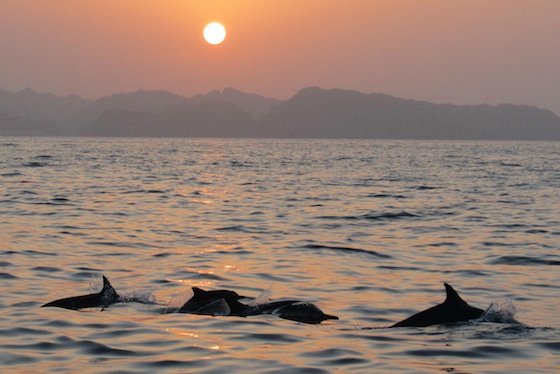 Our short break in Muscat has offered us a tantalising glimpse of an Arabia that is accessible, safe, friendly and contemporary without compromising tradition. It’s also left us busting to explore more of Oman. We are smitten but the last words belong to my son who, as we bundle our luggage into an airport bound taxi, earnestly declares “I wish we could stay here forever”.

If only we’d found that genie little man. 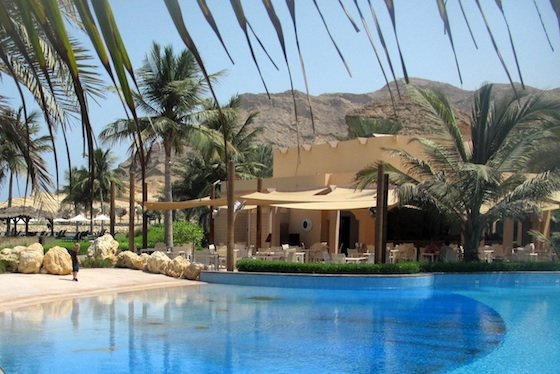 October to April is ideal. Avoid June to September when temps can top 45˚C and during the Islamic fasting month of Ramadan.

From Australia, flight stopover in Dubai or Abu Dhabi with connecting flights to Muscat.

The currency is the Omani Rial. At the time of writing, AU$1 buys 0.37 Omani Rial.

Australians can purchase a visa on arrival to Muscat airport for 20 Omani Rial.

Arabic is the official language but English is widely spoken.