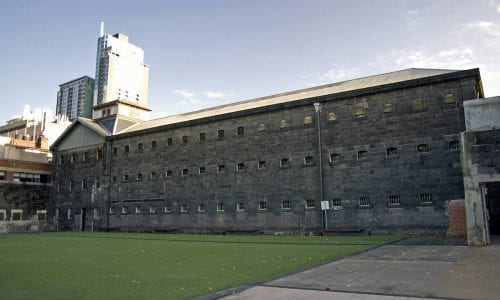 Freak the teens out at Old Melbourne Gaol

OAWK » Australia » Freak the teens out at Old Melbourne Gaol

Victoria’s unsavoury past comes to life at Old Melbourne Gaol. If you’re old enough, brave enough, or just up for a bit of spooky fun or a history lesson.

“Such is life” were the famous last words of legendary outlaw, Ned Kelly, before he met his death at the gallows of Old Melbourne Gaol after nearly 2 years on the run.

Ned Kelly’s is not the only ghost haunting the halls of Victoria’s oldest surviving prison. Teens with a taste for the terrifying can take their pick from a series of ghost tours of the Gaol, Old City Watch House and Old Magistrates Court.

Who knows, you might brush ectoplasmic shoulders with Australia’s most notorious bushranger, or any one of the former felons…

Old Melbourne Gaol recommends their tours to brave-hearted kids aged 12 and above.

You will leave with chills running up and down your spine.

Most tours are $38 for an adult and $35 for a concession, running for approximately 1 hour. You should arrive at least 15 minutes prior to your start time. Families should book online or over the phone.

Choose the Hangman’s Night Tour to hear stories from the perspective of the gaol’s least popular employee, the executioner. Pick ‘Ghosts? What ghosts!’ to hear real tales of ghost encounters and deathly doom that took place onsite.

If you are over 16 years, accompanied by an adult and carrying ID, then you can choose the Night in the Watch House Tour on certain dates. This nightmarish immersion into prison life includes encounters with infamous cellmates like Chopper Read or Squizzy Taylor. Due to low lighting, adult themes, confined space and the use of loud noises, the age limit is strictly applied.

The Old Melbourne Gaol was built in the mid-1800s and closed in 1929, during which time it was the site of around 133 hangings, including Ned Kelly’s.

The Goal’s rich history spans the conflict between British settlers and traditional indigenous inhabitants, the influx of prisoners during the Gold Rush, the removal of the bodies of the executed from the cemetery, and the reopening of the buildings as a military detention barracks for soldiers in the 1940s.

And this before its inauguration as a museum in the 1970s, when it is alleged that Ned Kelly’s remains were stolen!

Old Melbourne Gaol includes gallows, a cemetery and the original cell block. You can also see the Magistrate’s Court and the Watch House.

Fully operational until 1994, the City Watch House contained holding cells and short-term lock-up. Petty criminals and major offenders were generally held here after their arrest. As part of your visit, you can be ‘mock-arrested’ and feel firsthand the experience of old-school lock-up at the mercy of the Charge Sergeant.

Victoria’s unsavoury past comes to life at Old Melbourne Gaol. If you’re old enough, brave enough, or just up for a bit of spooky fun or a history lesson, then you’re sure to leave looking over your shoulder.

How to do Melbourne in 48 hours with kids