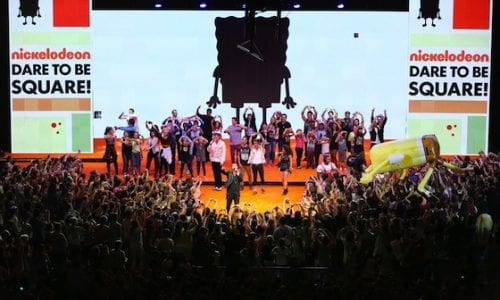 First stop, being given a groovy guitar pick necklace. My first job was to meet and greet as many of the Nickelodeon Slimefest stars as possible. Big Time Rush were there being interviewed for tv, they couldn’t fit us in, but Samantha Jade and Jadagrace were so nice to me.

I got fab photos with them and they loved my shoes. They were both sticking to the Nickelodeon theme which is ‘dare to be square’ which is fabulous. There’s too many meanies at some schools, so it’s great that a tv station are encouraging us to just be ourselves.

Back outside to the rides. Mum said, you don’t usually get rides at grown up concerts -­ so sad. Huge jumping castle rides, including this amazing one where you put a suit on and jump up and stick to the wall because you’re all covered in velcro.

Snack time, so mum and I got a chip on a stick. It’s like this big swirly potato on a stick, so you eat it like a chicken skewer. So yummo. They have them at the Easter Show too.

I’ve had so much fun and the concert hasn’t even started yet! I¹m a bit too short to go into the moshpit. After watching the show though, I was happy I wasn¹t in with all the bigger kids.

We saw some amazing numbers. I don¹t have a favourite, but I did really love Guy Sebastian’s new song Dare to be square. I want to be a singer, so I loved that!

Jadagrace is so young and did such a great job. Justice Crew and Samantha Jade were fantastic ­but the crowd went wild for Big Time Rush. Wow. I thought my ears were going to pop. So much screaming.

I haven¹t mentioned the slime!!

They had this cool slime remote that they pressed a button on to move it to the next slime position. It came down from the roof in a big sprinkler, they shot it out of hoses, big balls ­ anywhere they could get slime from they did. It looked gross and fun all at the same time. Commando was the big bad guy and his team lost the Slime Tug o’ War. Phew!

I think the best part was watching all the celebrities get completely covered in slime at the end of the show ­- they looked like they were having so much fun!

I can¹t wait to go again next year ­ maybe I¹ll even be tall enough for the moshpit. In the meantime I¹ll watch the show on Nickelodeon and see if I can see mum and I on tv.