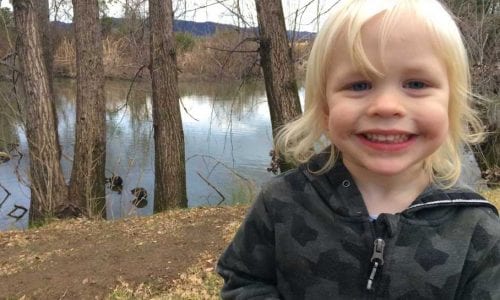 While aware that a “family historical tour” wasn’t everyone’s idea of a holiday, Shevonne Hunt had a hankering to return to Mudgee, where her parents grew up and where she visited on holiday as a child.

Mudgee is a town of roughly 11,000 people in the Central West of NSW, three and a half hours North West of Sydney where we live. These days it’s known as a hub for good food and wine, but when I was young it was better known as a farming town.

I have memories of hot summers, Pop snoring out the back during his afternoon kip and Nanna’s delicious fig jam with chunks of fruit. I remember the town had a sleepy stillness when we rode our bikes down to the park or explored the local shops. 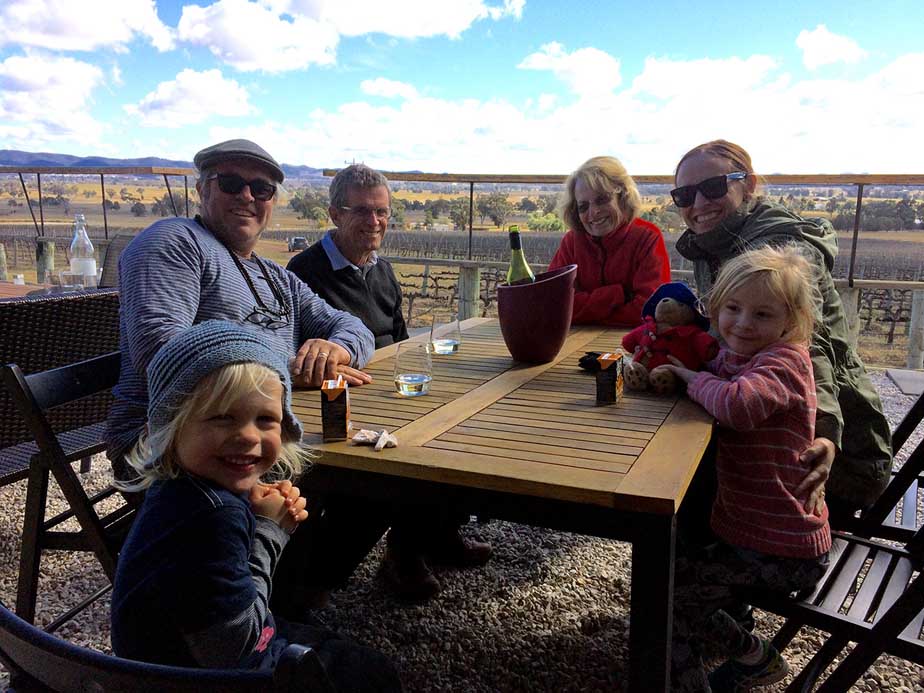 By the time puberty came around Mudgee had lost its shine. That sleepy stillness was boring compared to the bustle of the city, and eventually our visits became less frequent.

Now that I’m an adult with children of my own, I have a different reason for wanting to go to Mudgee. And no, it’s not the wineries and food (though they hold their own appeal). I want my children to know where their grandparents came from, and to understand a bit about their history.

You may think this kind of trip would involve a lot of research and meticulous planning. For a time, I did as well. I had romantic notions of researching our family tree back to the convict arrivals, but I soon realised that was missing the point. My eldest child is only five. You can see from my complicated diagram how I explained who my grandparents were in the scheme of things. Going back beyond them would have been lost on her. 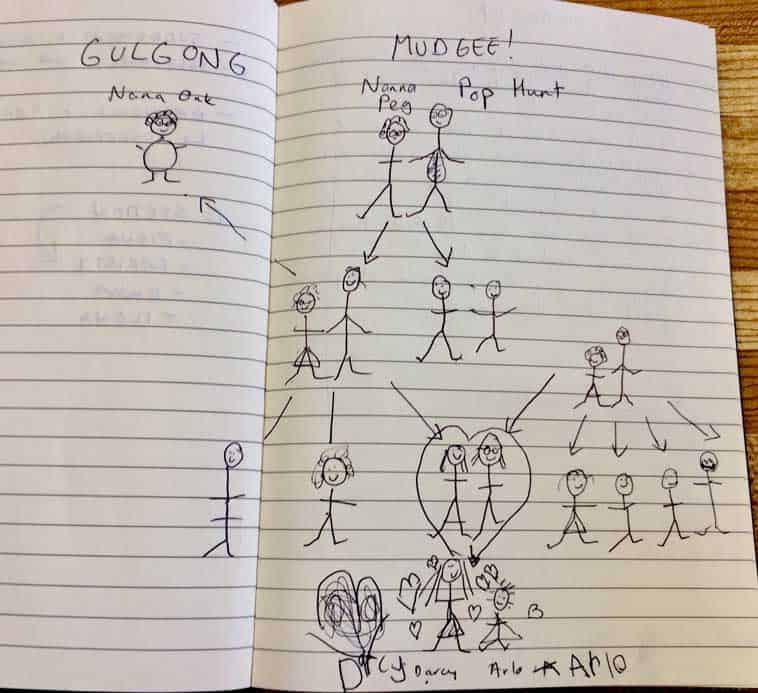 We stayed at the Mudgee Getaway Cottages, a farm-stay in the heart of Mudgee town. It was the perfect place to base ourselves. The cottages are a series of homes that back onto an enormous expanse of land, dotted with small details to delight children. There are vegetable gardens and lots of hutches with rabbits and guinea pigs to cuddle. There’s an old tractor they can climb, and a fenced off area filled with chickens, a turkey, a Shetland pony, a donkey, an emu called Miss Olivia and a camel. The kids were in seventh heaven. 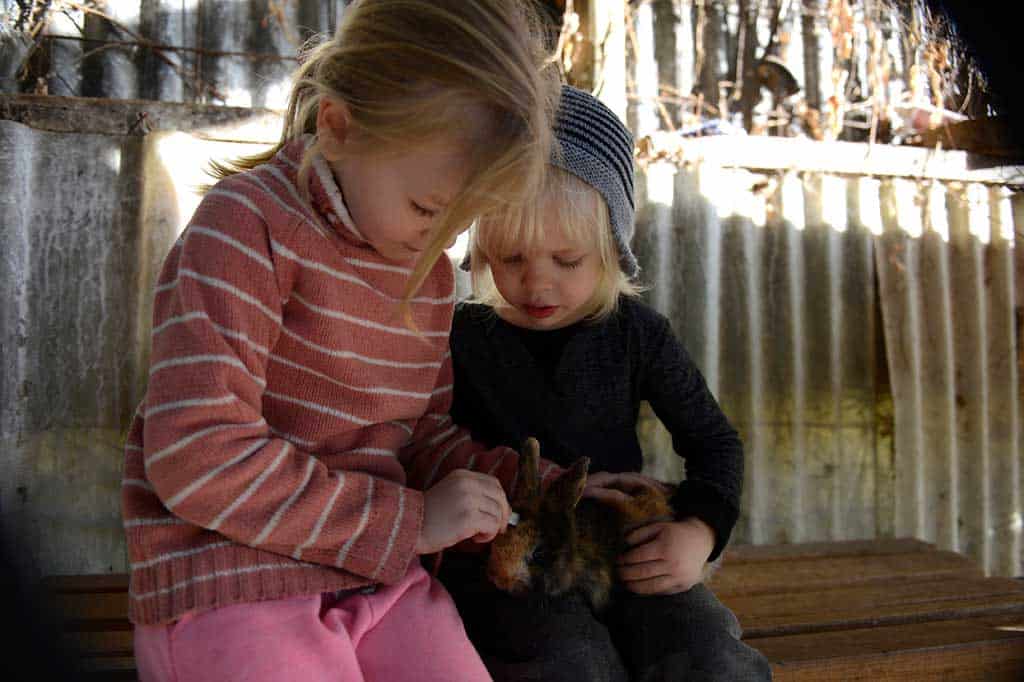 Everything is close by, including Lawson’s Park Hotel, where the food was delicious and the atmosphere relaxed. There are markets on Saturdays at the church in town, and the park I used to ride to as a child is just around the corner.

I love farm stays for my city children. It is such a great feeling to watch them having space to run around in, and nooks and crannies to explore. It was also a great place to come back to, after our historical adventures. 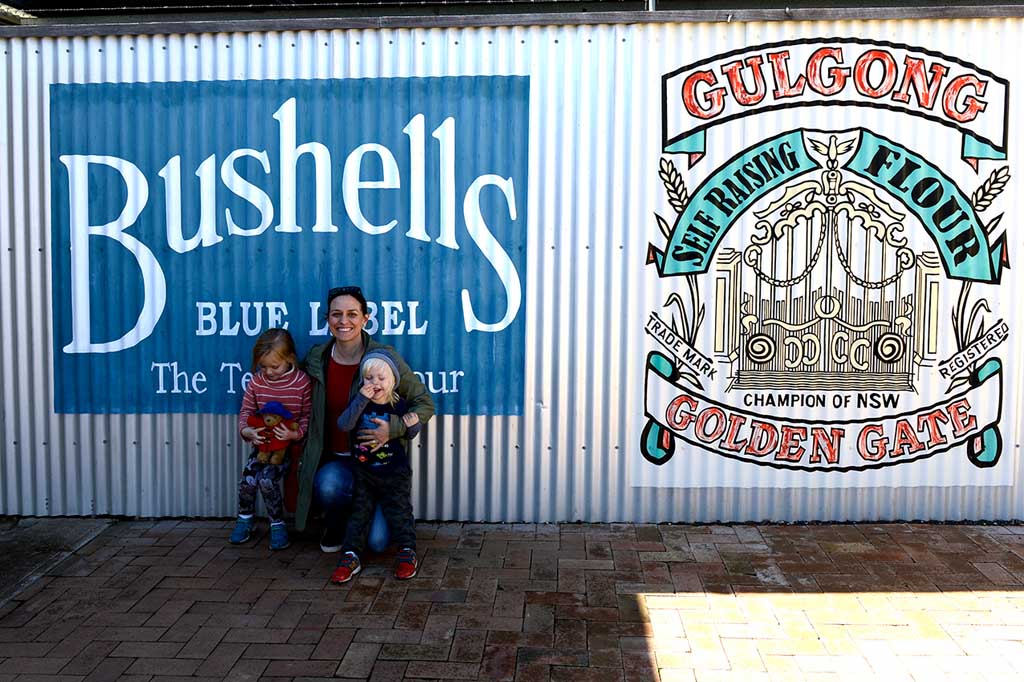 On the first day, we went to Gulgong, about 20 minutes from Mudgee, and to the Pioneer Museum, a great sprawling place filled with all kinds of bric-a-brac. My son was fascinated with a collection of old toy cars kept safe behind glass cabinets. Winding pathways took us past a myriad of displays: children’s bedrooms, kitchens, farming equipment and different clothing all from the gold rush days of the 1870s. 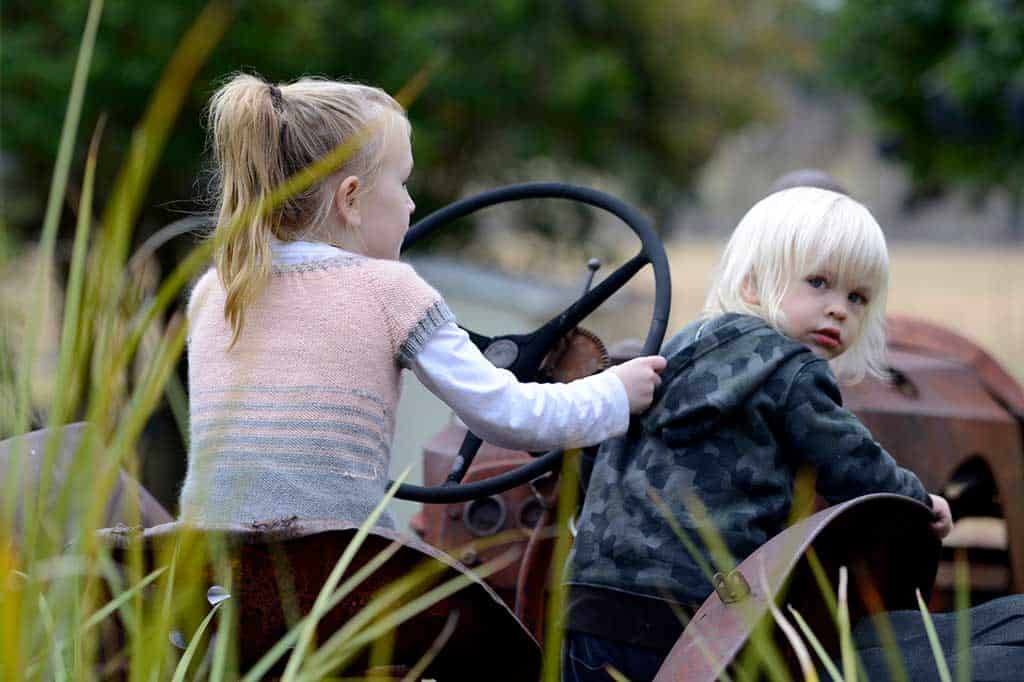 It was a labyrinth that opened up onto a huge warehouse full of old modes of transport, including an immaculate Cobb & Co Coach that looked like it was just waiting for the horses to be hooked into their harnesses. Beyond the coaches and carts was a street that included Gudgeon Cottage, a replica of a typical home in the 1800s that felt like its occupants had just stepped out for a minute. There was also a school house, blacksmiths and an inn. 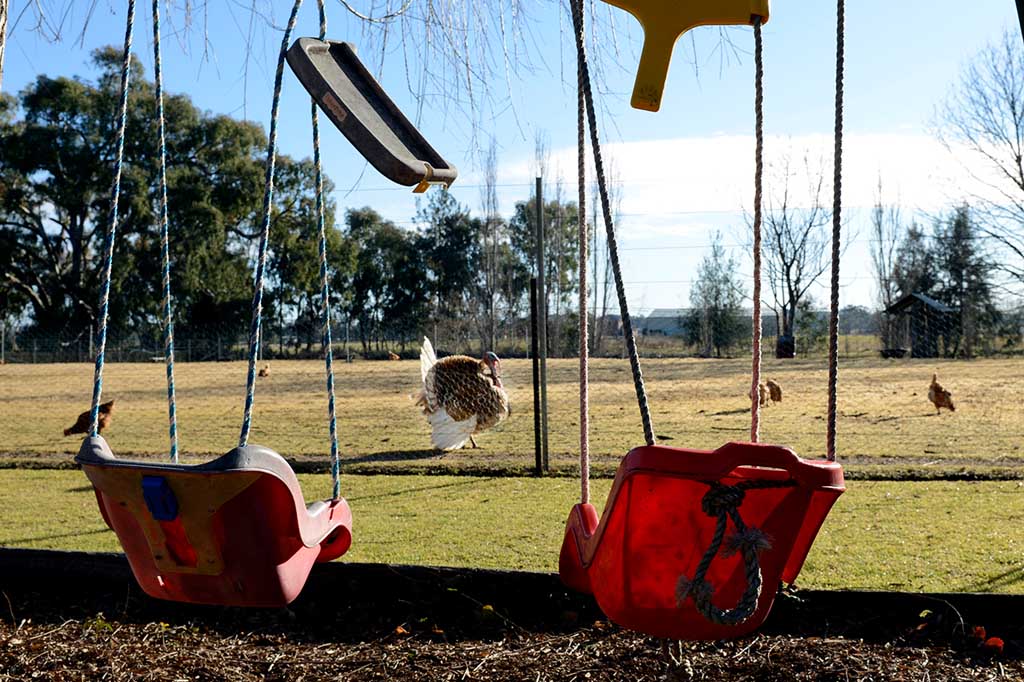 When my Mum was a girl, Gulgong was a small town. It still only has around 2200 people, but in its heyday the town swelled to 20,000 as people came filled with the hope of finding gold. Mum said it hadn’t changed much from when she was young, 60 years ago. Walking around the streets reminded her of places she used to go as a girl, the pub where she waited outside with her siblings while her Dad had a beer, her favourite Greek milk bar. We stopped outside where she went to primary school, which was right beside the old gold mine site. 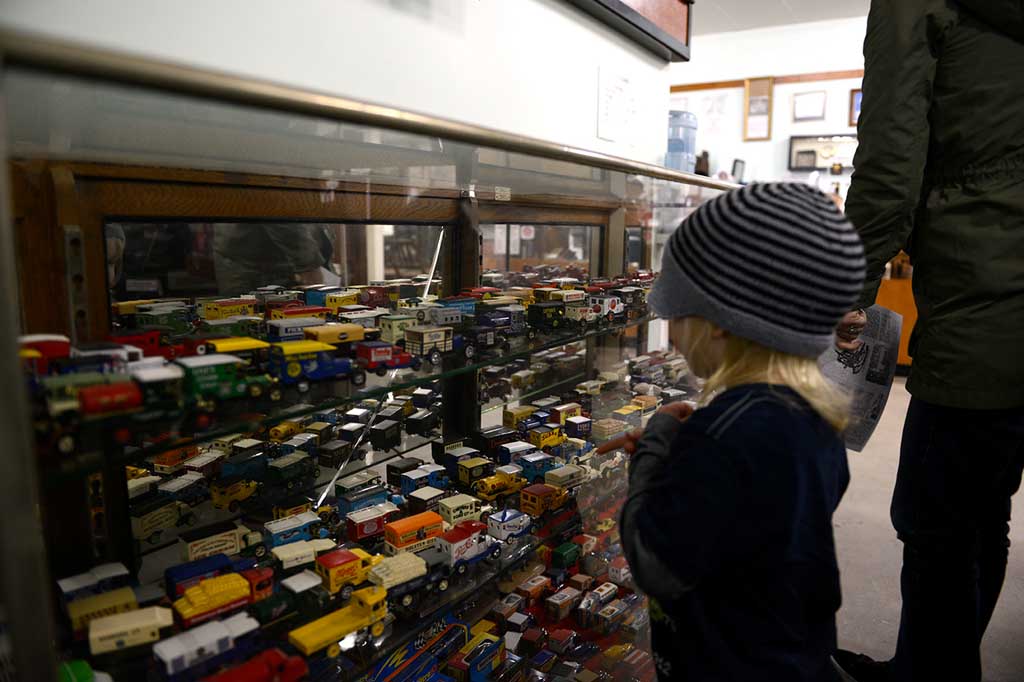 By the time we had finished strolling around Gulgong, Dad suggested we have lunch at a local winery called Moothi Estate. Moothi is the original name for Mudgee from the local Wiradjuri people, meaning “nest in the hills”.

The winery is close to where my Dad grew up, and as we looked out over the rolling countryside he pointed out where he used to walk as a boy. We had some wine and a ploughman’s plate, the perfect meal for fussy little eaters with all of its cheese, olives and dips. It was the first time I’d ever been to a winery in Mudgee. 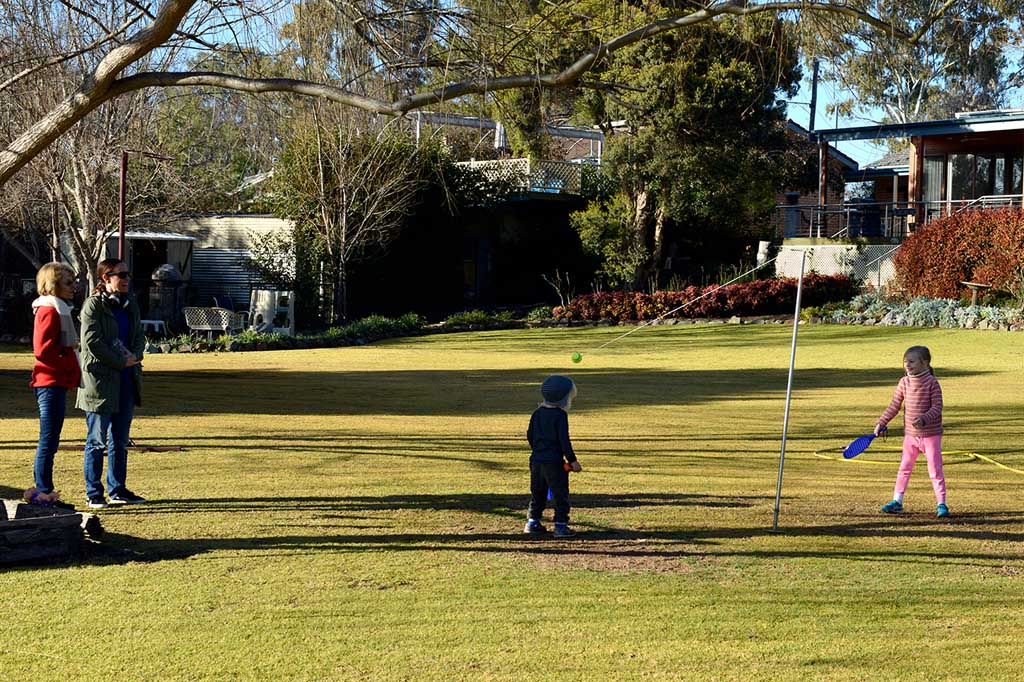 On the way home from lunch we stopped by the house where my Pop grew up. It was built in the mid-1800s, and at one time served as a kind of pub in the area. I’ve driven past the house several times. Every time I love to look at it, and imagine how my Pop lived there. Dad told me Pop used to sleep on the veranda (summer and winter) when his four other siblings and parents crowded him out of the house. He also remembered his grandmother sitting on the veranda knitting. 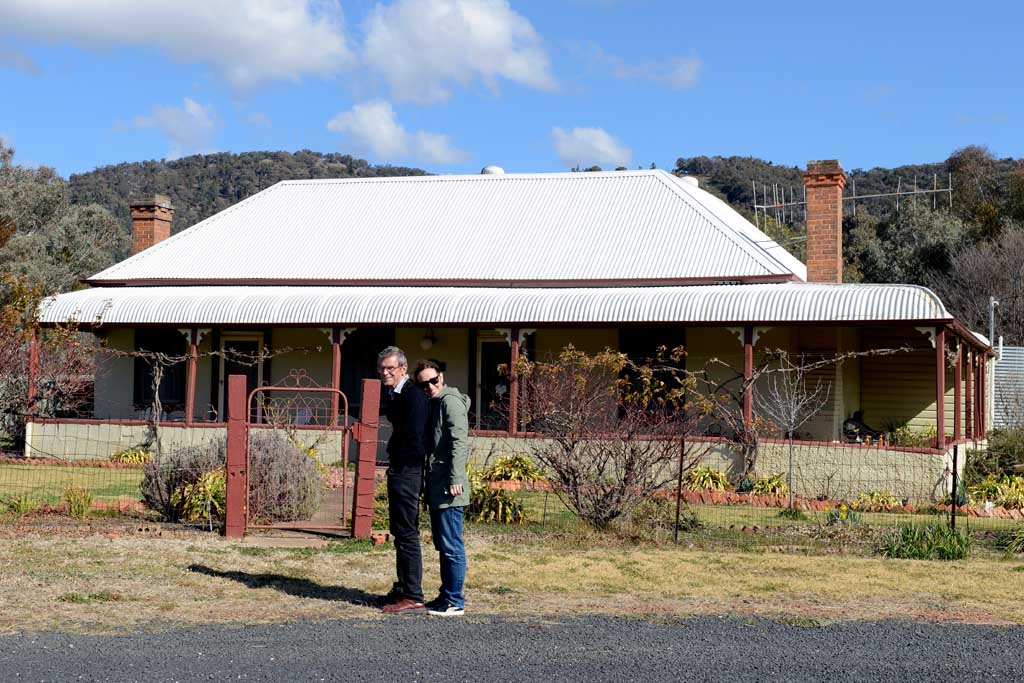 Some may say that Mudgee is a long way to go for a weekend, but for me it was totally worth it. The time we spent in the car gave me space to let my own memories spool out as we drove through the countryside. The time we spent with my parents gave them space to remember their own stories. Because ultimately, that’s what family history is isn’t it? A collection of stories.

Memories come to life when your senses come in contact with something – a sight, smell or sound. All we needed was to be in those places, and to have the time, to talk about the past.

In one weekend we had stories, history, good food and wine, lots of green space to play and animals to enjoy. And ultimately, we had time to connect and enjoy each other.

Where to Stay: Mudgee’s Getaway Cottages

What to See: Pioneer Museum