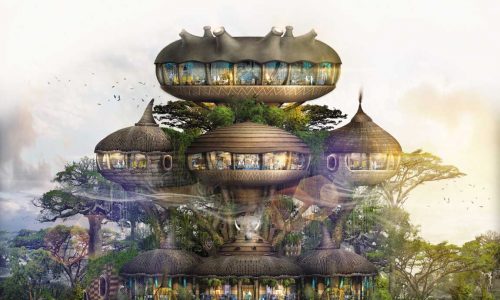 A wildlife sanctuary and reserve with seven hotels and four trains is set to open in China in 2022. Worldwide China, also known as The Luxury Human Zoo, is the brainchild of Bangkok-based architect and designer Bill Bensley, who also created the Four Seasons Tented Camp and Elephant Sanctuary in Thailand and his own Bensley Collection – Shinta Mani Wild luxury tented camp in Cambodia. Set on more than 800ha in southern China’s Guangdong province, the attraction will touch on everything that Bensley is passionate about – sustainability, conservation, wildlife protection, education and unique design. Bensley was originally approached to design a zoo with more than 2000 hotel rooms, but he isn’t a fan of zoos and, after visiting many in China, he turned the concept on its head and proposed a wildlife sanctuary and reserve which dedicated 95 per cent of the land for animals to run free and 5 per cent for people to observe and learn about the animals from the comfort of luxury hotels. “It is my dream that the mistreated animals of overpopulated zoos in China could run free there,” he says. “Of the 60,000 vertebrates worldwide, we are reassigning non-predator animals from less fortunate Chinese roadside zoos, to create an ecosystem where they can all thrive. I am planning a wildlife reserve without cages or predators, as that simplifies the equations significantly. Instead of fences, we will use natural barriers to separate species which might not get along, such as rivers, mountains, forests or hahas (a recessed landscape design element that creates a vertical barrier while preserving an uninterrupted view of the landscape beyond).” The hotels will be spread across three zones representing the continents of Asia, Africa and Australia.  Operated by Hyatt, Asia’s hotels will be called Dzong and Dragon’s Nest, while Africa’s will be called The Colony Lodge Hilton and Stone Town Conrad. Australia will have three hotels inspired by the gold rush and the settlers who flocked to the country: the Waldorf Astoria World Wild, the Fish River Settlement by Waldorf Astoria and the tented camp, Kamp Koala. The four trains will visit all three continents in the reserve. The three luxurious sleeper trains are named the Tasmanian Tiger, Oriental Expresso and the African Queen. Following the head conductor wagon, each train will have five cabin wagons with suites that can accommodate up to 40 guests, a restaurant wagon and an observation wagon. The fourth train, the Iron Horse, will wind around the park and take people to eight different whistle-stops. At each stop people will experience a presentation likened to a Broadway show, educating them on different aspects of wildlife, environmental protection and sustainability.