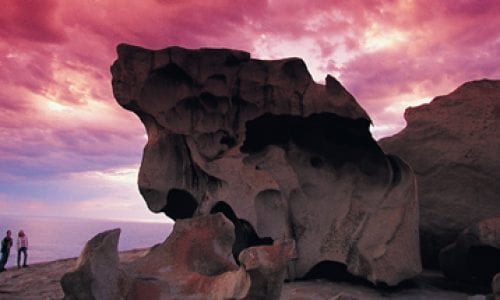 Hopping over to Kangaroo Island

Kangaroo Island offers an abundance of ‘up close and personal’ wildlife encounters that will bring out the child in us all, writes Charlotte Francis.

In the soft red glow of our bird-friendly spotlights, we follow rangers to watch little penguins scrambling up to their nests in the rocks. This exciting adventure with rangers from the Kangaroo Island Penguin Centre is merely the entree to what turns out to be a wildlife-rich feast lasting several days.

Just 13 kilometres off the coast of South Australia, Kangaroo Island is Australia’s third largest island and has a population of around 4000. Discovered in 1802 by English explorer Matthew Flinders and his French counterpart, Nicolas Baudin, Flinders named it Kangaroo Island in appreciation of the abundant meat supply provided by the numerous local animals.

Separated from the mainland, the island’s native bushland remains largely unspoilt and more than one third of the island is protected in conservation parks. Large tracts of wilderness, rugged coastline, eucalypt forest, bush, rivers, creeks and wetlands make it a haven for bird, plant and animal life.

We reach the Flinders Chase National Park on the south-western edge of the island in good time on our second day. After a quick look at the Interpretation Centre with its historical and geological timelines, we set off for Remarkable Rocks. Standing in the buffeting wind with the sea raging 75 metres below, you can see how these granite slabs have been weathered into weird and wonderful shapes over the last 500 million years.

Not only do we see several sleepy koalas curled up in the treetops, we also spot an echidna (a big tick on our list) and enjoy the company of blue wrens

A short drive on and we come to Admiral’s Arch, a natural archway shaped by the pounding waves of the Southern Ocean. The flat rocks below are home to a large breeding colony of New Zealand fur seals (estimated at 7000). A viewing platform allows fantastic views of the seals basking in the sun or dipping into the ocean swell.

Excited by the prospect of guaranteed koala sightings, we stop off at the Hanson Bay Wildlife Sanctuary on our way to Seal Bay. We aren’t disappointed; not only do we see several sleepy koalas curled up in the treetops, we also spot an echidna (a big tick on our list) and enjoy the company of blue wrens, white-browed scrubwrens, and a scarlet robin.

Contrary to what the name suggests, the Seal Bay Conservation Park is actually all about sea lions, and with a population of approximately 700, this is the third largest colony in Australia (and the most accessible). The best way to get up close and personal with these creatures is to join a guided tour, which will take you down to the beach via a boardwalk. Here the whole family can learn more about the sea lions who are resting on land after a few days at sea and watch delighted as they lazily stretch, slumber and scratch atop a thick bed of seaweed. Mothers and their chocolate-brown pups lollop across the sand; unlike seals, they have large front flippers and hind flippers that allow them to walk on land.