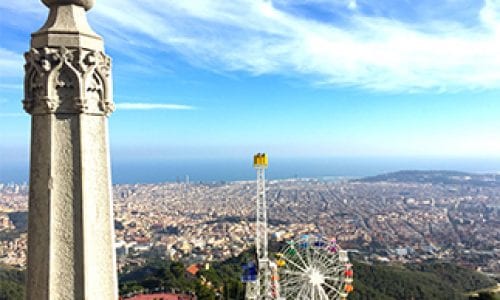 Where to go for the best view in Barcelona

OAWK » Uncategorized » Where to go for the best view in Barcelona

When you arrive in Barcelona, look up towards the mountains, and you’ll spot a cluster of three very disparate attractions: A Ferris wheel, a cathedral, and a telecommunications tower. It’s Tibidabo, home of the best views in Barcelona.

The original reason we went to Tibidado was to take the funicular, because our son is obsessed with different kinds of trains. Barcelona has 3 funiculars and it would maybe not be a bad idea to plan your trip to Barcelona around riding ALL of them. After all, the journey is the destination.

There’s two routes we’ve taken, both involving funiculars. The first, you take the train to Vallvidrera, and then hop right on board a funicular (included in your metro pass). It will take you to a small town atop the mountain, and from there, you catch a small neighborhood bus to Tibidabo. You’ll have to wait for the bus, but the station is right across from a gelato shop!

The second route, you take the train to Av. Tibidabo. We thought this would be easier, but it’s not! You then have to take a bus to the funicular, and pay a separate ticket. Also, this funicular is not as nice as the public one. But the views are still great.

Either way you decide to get there, you’ll find yourself at Sacré-Coeur, a gigantic cathedral with a set of stairs that will give you a great workout and an even better view. Of course, your kids will be staring at the amusement park, which has been around since 1901.

If you want to go to the amusement park, plan to get there early and spend the whole day, hopefully on a weekday! (It’s closed asides for the top-level attractions on Sundays.)

We got all the thrills we could want by taking the elevator, and then the stairs, to the very top of Sacré-Coeur. The elevator is a bit hidden inside the lower level of the cathedral. Tickets are 3.50 euros a person. The views are worth it, though!

The top level is like reaching the top of the Empire State Building. A tiny viewing platform gives you 360 views of the city and the countryside behind it.

Our four year old son was eager to climb the stairs, then immediately turned back around at the top. If you or your kids are bothered by heights, there are still excellent viewpoints from the main level of the basilica, the amusement park, and from the safety of the funicular on the way home.