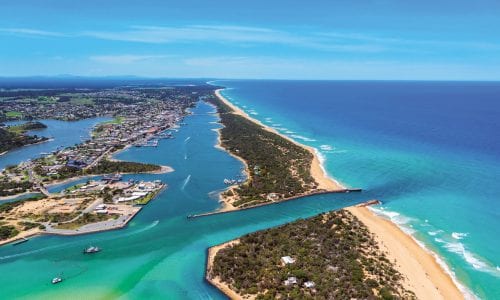 Victoria’s East Gippsland region suffered extensive damage in the fires, with major holiday spots such as the Gippsland Lakes evacuated during peak season. The Princes Highway – the key Sydney to Melbourne coastal touring route that brings traffic to East Gippsland – was closed for more than a month. Other areas of Gippsland were not affected by the fires but suffered from the resulting downturn in tourists. Even in places that were more heavily impacted, such as Mallacoota, Buchan, Bruthen and Cann River, the town centre is unscathed, but fire damage can still be seen on the roadsides, bushland and private properties between towns and, in some cases, in homes on the outskirts. Several national parks remain closed as Parks Victoria rebuilds facilities, with latest updates available via its website.

A much loved Victorian holiday spot, Lakes Entrance occupies a spectacular position on the edge of Ninety Mile Beach, where the Gippsland Lakes meet the Southern Ocean. Explore the lakes in a kayak or stand-up paddleboard, hop aboard a boat for a cruise or make the kids’ day with a visit to Footbridge Mini Golf, Lolly Shop & Ice Cream Shack. For a dose of style, Metung is the place to be. A great base for water sports enthusiasts, this tiny picture book village features fine food and wine and a handful of inspiring galleries. Families will love having lunch overlooking the water at Metung Hotel, splashing in the town’s free water park, and climbing in the timber structures of the adventure park. Paynesville is surrounded by lakes on three sides, with canals and inlets providing plenty of opportunities for water sports. Take the free car and passenger ferry to Raymond Island across the McMillan Strait, which is one of the best places in Australia to spot koalas. There are also 140 species of native birds to spot in the Lakes National Park. Walk the trail or peddle your way around on a surrey bike from Ride the Koalas.

Discover a honeycomb of spectacular limestone formations, carved by an underground river almost 400 million years ago, at Buchan Caves. Tour the largest cave system in Victoria, enjoy a picnic in the scenic heritage-listed landscape or camp under the stars. Join a tour of Fairy Cave or Royal Cave, or both, and marvel at the magnificent stalactite and stalagmite forms, pillars, shawls and rim pools, as well as cave sediment and a flowing stream.

Take a cruise with a local guide to see Mallacoota Inlet, or paddle a canoe up the Genoa or Wallagaraugh rivers to Gipsy Point, a beautiful peninsula jutting into the top lake of the Mallacoota Inlet, which is home to a large mob of kangaroos.