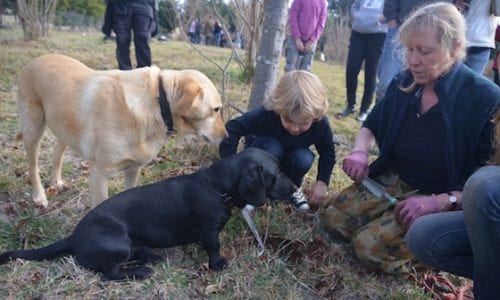 OAWK » Uncategorized » Follow your nose to the Canberra Truffle Festival

Take two very cute dogs, an expansive farmyard setting, a couple of trowels and permission to play in the dirt and the result is two very happy kids. Add truffles to the equation and mum and dad are going fairly gaga too.

We’re at Peter and Kate Marshall’s Terra Preta Truffles in beautiful Braidwood to join a Truffle Hunt as part of the Canberra Truffle Festival and it’s proving to be a whole lot of family fun.

It’s a sunny winter day and anyone wondering if truffles and kids go together need only take one look at my giddy five year-old to know the answer to that question. He’s so excited about the gastronomic treasure hunt that he leaps with great enthusiasm into a lime tray (part of a biosecurity boot process that’s in place to prevent contamination of the truffle patch from foreign seeds or dirt) bursting at the seams to begin.

At first we keep a respectful distance as super truffle dog, Sal, a Labrador Kelpie cross, and her young apprentice, Shadow, a Labrador Dachshund cross that looks a little like a fur seal, run about with doggy dedication between the rows of hazelnut trees. It takes no more than a minute or two before they’re in the zone and pawing the ground enthusiastically. Trufflier Kate beckons Rafferty to joining the dogs, handing him a trowel to dig up the first beautiful black truffle of the day.

The unmistakable aroma fills the air as it comes up out of the ground and the adults swoon. Rafferty, himself, is so excited at the sight of the enormous potato-like fungus you’d think he’d dug up solid chocolate.

Over the next hour we all get our turn at digging up a truffle or two from the earth though little Marlo, at just two-years old, is quite happy playing with a stick and collecting fallen hazelnuts in her pockets. A bucket full of truffles later and it’s time for the clever truffle hounds to be rewarded with pats from their adoring fans. For Marlo, cuddling with the perky pups is a highlight.

For Raffles it was digging for buried treasure. For us, it’s the amazing lunch of soup, scallop pies and ice cream all spiked with truffles. Hot spiced apple juice and truffle studded marshmallows roasted on sticks over an open fire end a perfectly delicious day for everyone, big and small.

This family has caught a case of truffle fever so we’re planning to head to Fyshwick Markets tomorrow for a little more truffle action. The market is offering truffle-inspired cooking classes (including kids classes), free cooking demos, loads of fun kids activities plus fresh truffles and truffle products to purchase and eat each Sunday in July.