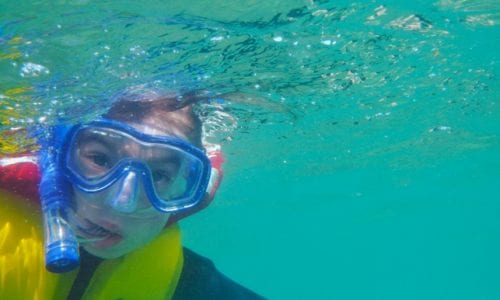 My plans for introducing our six-year-old daughter, Ivy to the joys of snorkelling on the Great Barrier Reef hit a snag almost as soon as we hop off Wavedancer, the catamaran that has delivered us to the Low Isles, 15km off the coast of Port Douglas in Far North Queensland. 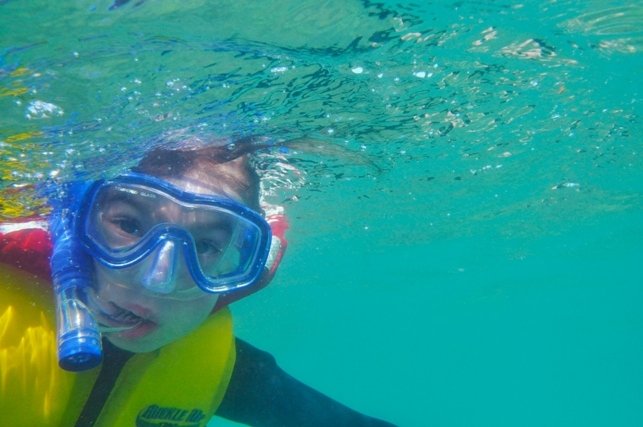 We’ve been practising with the mask in the pool and she’s comfortable with that, but… “Dad! My front tooth is wobbling and I’ve got blood in my mouth,” she yelps the minute I put the snorkel in.

Ah. I haven’t allowed for this scenario. Fear of sharks? Got that covered. Water entering into the top of the snorkel? I’m ready for that. But newly wobbly tooth … that’s come out of the blue.

Ivy’s panic escalates as it dawns on her how far from home she is. “If it falls out, how will the tooth fairy know where I am?” she wails.

Fortunately, Quicksilver’s resident marine biologist seems trained for such dental dramas. She finds Ivy a sand dollar (a circular shellfish with a flower pattern on its underside), which distracts her from the real dollars she’s fretting about missing out on in the ivory trade that appears to be a chief topic of conversation in the modern playground.

The Low Isles are signposts that announce your arrival in the magical marine realm of the Great Barrier Reef. Less than an hour from Port Douglas, these uninhabited Coral Sea islets offer incredible snorkelling conditions, with an astonishing array of aquatic action accessible within a few metres of the beach. 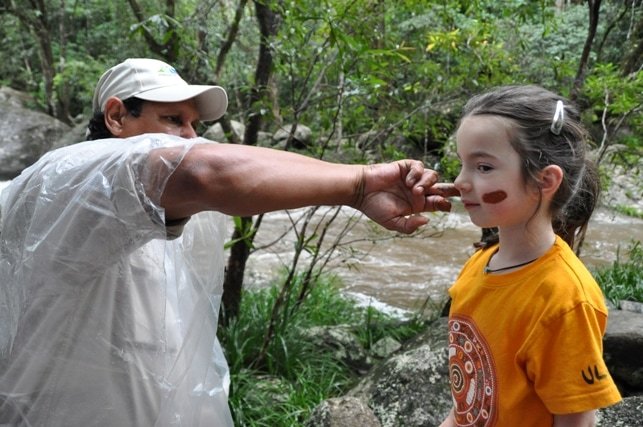 Snorkel abandoned, we spend the afternoon messing around in the shallows with our masks on, spotting fish, collecting shells and dangling Ivy’s baby sister Alice (11 months) in the warm water while my wife, Steph, goes on a snorkelling tour led by the marine biologist. I figure there’ll be plenty of underwater time when we got to Fitzroy Island later in the week.

Back on terra firma we discover plenty of distractions to keep us busy, while I wait for the tooth to dislodge and Ivy wills it to stay put. Port Douglas is abuzz with families on holidays and international visitors. The kids lap up the company of fellow children at the beach, in the wonderful hotel pool at the Rendezvous Reef Resort, and at fun family events such as the toad racing in town, yet it’s still easy to get away from the hubbub and do some proper exploring when you want to.

A short drive up the Captain Cook Highway from Port Douglas brings you to Mossman Gorge Centre on the fringe of the Daintree National Park – gateway to the tropical rainforest which forms part of the ecosystem that sustains the reef we’d been exploring a few days earlier. 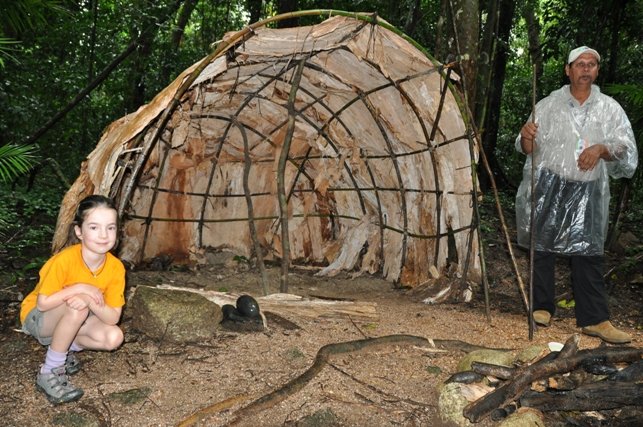 This terrain has been home to the Kuku Yalanji people for millennia and the experience of being led through the forest on a Dreamtime Legend Walk by an indigenous guide is something children will never forget.

Our guide, Harold, welcome us with a traditional ‘smoking’ ceremony, explaining that the wood smoke we’re walking through is to cleanse us and ward off bad spirits. From this moment, Ivy and the other kids in our group hang on his every word as he walks us through the woods explaining how each plant and tree is traditionally used by his people, and talking about ngadiku – ancient legends.

On the banks of the gorge, with the Mossman River in full flow beside us, Harold decorates the girls’ arms and faces with ochre. I’ve seen Ivy get her face painted a hundred times, but never has the process been accompanied by such an expression of awe.

Turning south we base ourselves in Palm Cove for a few days to explore the surrounding area. With a fantastic beach, a great night market and the choice of several family-friendly hotels and restaurants, Palm Cove offers an excellent alternative to staying in central Cairns for people travelling with young kids.

We check out two places while we’re here – the super laid-back Reef Retreat, with beautiful villas set around a forest-fringed pool, and the Novotel, with a range of great swimming spots and play areas – both walking distance from the beach. 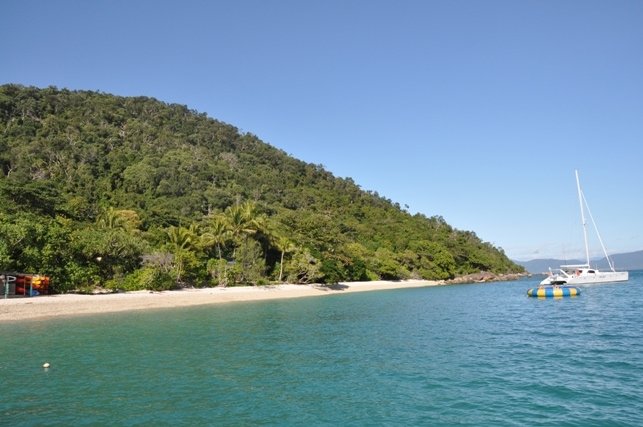 Palm Cove is also on the right side of town for both Cairns Tropical Zoo – where we finally track down a cassowary and catch a glimpse of the crocs the creek crossing signs have been warning us about – and the Skyrail up to Kuranda, a relaxed little artisan’s town perched up in the cloudscape of the Tablelands, and a great place to escape from the tropical heat of the coast.

The tooth wobbles its last on the night before we catch the boat to Fitzroy Island – and yes, the Fairy manages to track us down – leaving Ivy with a functioning (albeit depleted) set of pearly whites. I’m delighted, as Fitzroy is even better equipped than the Low Isles as a place to teach children how to snorkel.

For starters you can stay overnight on the island, in beautifully appointed self-contained apartments that directly overlook the sea. Secondly, the main beach is carpeted in bits of coral, which tinkle like glass as the waves lick them and prevent sand from kicking up and ruining the visibility. Fitzroy doesn’t get the day-tripping crowds that flock to nearby Green Island either, so it’s possible to get entire sections of the beach to yourself.

Here colourful coral gardens sprout in waist-deep water just metres from land, and kids can observe scores of vivid fish simply by dipping their faces beneath the surface. Turtles are numerous but even if you don’t spot one in the ocean, you can visit the new turtle hospital that’s recently opened on the island, where the kids can see these amazing animals up close and learn all about them. The island has a PADI dive centre too, offering courses to children eight years and older. 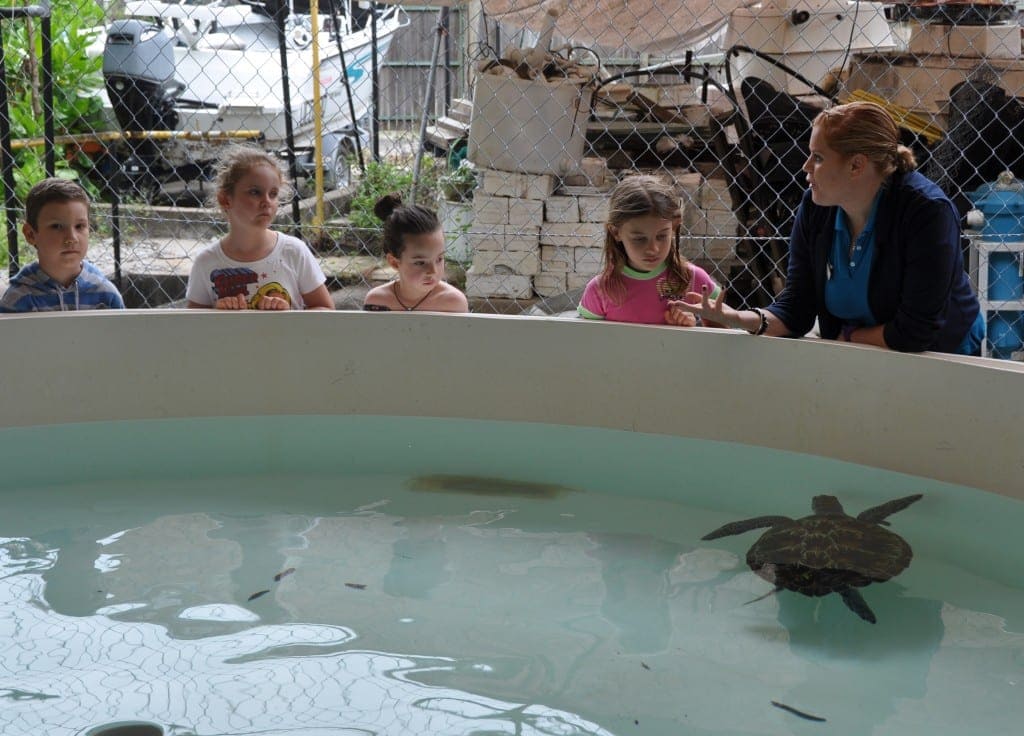 There are a number of bushwalks around the island, including an adventurous hike to the highest point via the lighthouse, and another to the Secret Garden and Nudey Beach.

Alternating between snorkelling, wandering and bouncing around on the floating trampoline in the bay, our days pass quickly. My mission to engage Ivy’s interest in the underwater world is boosted by the fact that our visit coincides with a conference of marine biologists, who are there with their families. Among their ranks is a girl Ivy’s age, who has been snorkelling as long as she’s been walking, and instantly they become friends.

On the last day we hire some glass-bottomed kayaks, which have been custom-made for the island. It’s all going well until a huge fin breaks the water a few feet away.

“What was that dad?” enquires Ivy calmly, as Steph goes into full fear meltdown. “Er, maybe it was a dolphin?” I suggest, trying to convince myself as much as anyone else. “Shall we go and have a look?”

The fin appears again, followed by another, equally as large. We beat a hasty retreat to the beach, where the biologists listen to our story about a pair of epic-sized sharks with amusement. “That’s the local manta ray,” they explain. “It lives around here – those were the tips of its wings you saw, not fins.”

Cairns Airport is the gateway to Tropical North Queensland with flights available from all major Australian cities.  To get from Cairns to Port Douglas and Palm Cove simply hire a car, grab a taxi or take the shuttle bus.