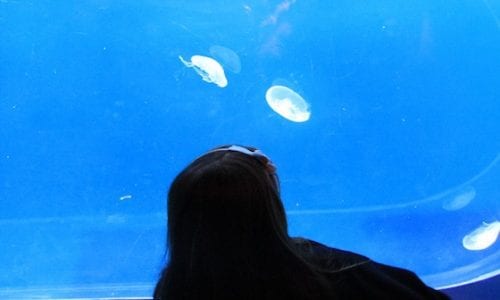 Exploring life under the sea at the Melbourne Aquarium

OAWK » Uncategorized » Exploring life under the sea at the Melbourne Aquarium

It’s no wonder so many people visit the aquarium each year. Recently we had a family outing to SEA LIFE Melbourne Aquarium – we hadn’t been for quite some time, so I was amazed by how interactive the aquarium is now … something for everyone, kids and adults alike.

Upon arriving, my 8 year old son and 6 year old daughter tentatively walked into the dark cave, unaware of what they might meet. We followed the path down to the Bay of Rays, where we were greeted by a very large manta ray hanging from the roof. Here we spent time peeking into the underwater world of Port Phillip Bay, before finding the answer to the first clue in the stamp reward book.

When you arrive, don’t forget to collect your Melbourne Aquarium Dive Log Book … this little book helps visitors understand some of the wonders of our sea life by finding answers to clues, and you get to collect stamps too!   As we made our way along the boardwalk we experienced many different elements of sea life.

I watched as both my children were mesmerised by the rock pools – learning by touching and feeling sea shells and other objects – and even holding a star fish … “Wow, it’s really smooth and not at all bumpy like I thought,” said my daughter. And before I knew it, my children disappeared into a tunnel, only to pop up again inside the tank, protected by a glass dome and looking like they were part of the seaweed. We had lots of fun playing hide and seek among the fish.

We made our way to the Mermaid Garden and were greeted by the underwater spectacle of sharks and stingrays gliding peacefully through the water. As my son said “It’s just amazing Mum, the stingrays must be about two metres long and it seems that they have long tails with spikes just to make them look really mean, because when they come up to the glass they have a really cute smiling face.”

We spent quite some time standing in the underwater tunnel watching these amazing creatures swim right toward you and then glide slowly over your head. I saw my daughter, who was sitting on her father’s shoulders, reach up to touch the glass tunnel roof and then duck as a a rather large shark passed over her head. Standing this close makes you realise the enormity of life under the sea!

Next we wandered around looking for sea horses and shrimp, explored the changing colours of coral and watched box jellyfish float by. You can sit and have lunch next to a floor-to-ceiling fish bowl and watch a variety of multi-coloured fish and other sea life swim among the coral … something you don’t get to do every day.

As we ran off to find the answer to the last clue, we entered the penguin playground and found that the penguins were just as interested in us, then they waddled away – slipping and sliding on the ice as they went. We watched them dive into the water, twisting, turning and swimming loops – easy to see why they are the fastest swimming bird.

As we headed home, our chatter was filled with lots of “Did you know?” …

“Did you know that turtles think plastic bags are jelly fish, and that’s why you shouldn’t throw your rubbish out?”

“Did you know that you shouldn’t take shells out of the sea in case there is something living inside the shell?”

“Did you know that the penguins get ice blocks filled with a fish treats? It’s a bit like when we make frozen ice blocks with fruit in them.”

It doesn’t matter how big or small you are, seeing and experiencing the beauty of life under the sea is truly an amazing experience that transports you into another world.

Think about taking public transport, it’s stress-free and the kids love it. The train takes you straight into the city, get off at Flinders Street Station, then you can jump on a tram, which takes you straight to the front door of the aquarium.  We left home on our bikes and caught the train into the city, followed by a casual ride along Flinders Street footpath, right to the front door of the aquarium – and my son told us on the way home “Did you know bike riding is the most fish-friendly way of getting around!”

Sarah Ray lives in Melbourne with her husband Ash and children James (8) and Amelia (6). They love exploring their city – especially on their bikes!