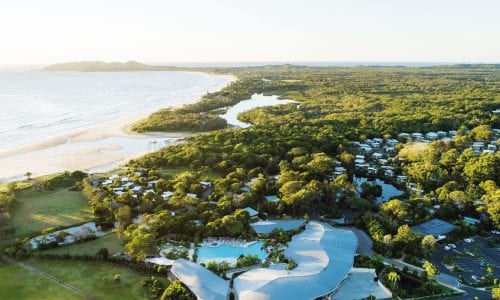 When ANGELA SAURINE returns to one of her favourite Australian resorts in Byron Bay, she finds it has evolved with her

I am pushing my toddler Oliver along the quiet road through Elements of Byron resort on his ride-on scooter, listening to the birds tweeting in the gum trees that surround us, when suddenly a rabbit darts across the path in front of us. “Bunny!” I cry, pointing excitedly in the direction of the fluffy critter. No sooner had the words exited my mouth, than it scurries back across the road in the other direction. As we continue our exploration of the resort, we come across a bush turkey, followed by a lizard, then a duck in a pond, much to Oliver’s delight.

Integration with nature is one of the biggest drawcards for Elements, located on a 20ha property at Belongil Beach, around ten minutes’ drive north of Byron Bay on the NSW North Coast. The smell of eucalyptus permeates throughout, magpies squawk in trees, and birds even fly through the restaurant, Azure Bar and Grill, during breakfast when the bifold doors are open. There are signs describing the wildlife you are likely to see dotted along the roadways. While Oliver is a bit young to appreciate them yet, they are great for older kids.

I’d first stayed at the resort PB (pre-baby), shortly after it opened in 2016, and immediately fell in love with its ‘barefoot luxury’-vibe. The shape of the main pavilion was inspired by a windswept sand dune – one of four ‘elements’ that have influenced the design, along with eucalyptus, wetland and rainforest. As soon as you exit the lobby, one of the first things you notice is the large round fire pit, surrounded by colourful day beds, in front of the main lagoon pool. Day beds also hang suspended over the shallow pool in the adults-only area.

Built on a site previously owned by Club Med (that never eventuated due to opposition from locals), Elements was a passion project for its owners, BRW rich lister Brian Flannery and his wife Peggy, who aimed to develop a resort with minimal environmental footprint. They seem to have succeeded in their quest – with everything from paper straws and biodegradable take away coffee cups with composable sugarcane lids, to iPads with guest information in villas, and a motion-activated energy management system that shuts down power when you’re out and about.

When I first visited, it was all studio and one-bedroom villas, and most guests were travelling in couples and groups of friends. Since then, another 99 luxury one and two-bedroom, two-bathroom villas have been built, many with timber decks and inbuilt fireplaces, bringing the total number to 193. The dramatic increase in families staying at the resort is noticeable. It has the feel of an upscale holiday park, with kids playing bocce and giant chess and climbing on the wooden playground. When it rains, we hitch a ride in a buggy to dinner, which is excellent fun.

We spend one afternoon by the pool splashing about in the toddler area, before heading to the resort’s Botanica Beach Club – the only one of its kind in Australia. Kids play in the sand while parents lie back on the loungers and sip gin from the retro van while admiring the views out to Julian Rocks Marine Reserve, traditionally known as Nguthungulli.

As a mum, I know that taking time for self-care is important, so one morning I escape for a yoga class at Heart of the Bay, a specially-built elevated grass area also overlooking the beach. I’m one of around 30 people in the class, including a couple of tweens. Doing yoga outdoors is one of my favourite things in the world, and it’s lovely using Cape Byron Lighthouse as a focal point during balancing postures, feeling the wind in my hair, the warm glow of the rising sun on my face, and listening to the sound of waves crashing against the shore as seagulls glide overhead.

Feeling recharged, I am ready to get out and about and enjoy the many family-friendly activities and experiences in the area with Oliver. Just a few minutes’ drive down the road, The Farm is a wonderful place for kids to learn about where food comes from. The innovative, multi-faceted business has been running since 2013 when Tom and Emma Lane, who had backgrounds in fashion and advertising, bought the former dairy farm after seeing their then three-year-old daughter devouring green beans she’d grown and picked fresh from their veggie patch. We wander around the 32ha working farm and see the vegetable gardens, horses, pigs, heritage Scottish Highland cattle and chickens, which roam freely and are used for meat and eggs in the on-site restaurant, café and produce store.

From there, we continue to Crystal Castle, around 20 minutes’ drive away in the Byron hinterland. At first I find it difficult pushing Oliver’s pram on the gravel path, but it becomes significantly easier once I realise I still have the brakes on! Oliver stares in wonder at the sparkling crystals in the Enchanted Cave, not quite sure what to make of it all. We take our shoes off and walk over the pebbles on the reflexology path. Oliver touches the giant crystal that lies in the middle, fascinated. “That’s Buddha – he’s a good guy,” I explain as we pass a 4m high statue of the spiritual teacher.

Castles seem to be big in these parts. Another day, we head south to Macadamia Castle near Lennox Head, which despite its name is more like an animal park with a train and playgrounds (and a large souvenir shop). Oliver giggles as we pat and feed the goats, who are quite boisterous. We eat gelato, watch a reptile show and meander through the aviary before jumping on the train for a ride around the park. Trains are always a winner for toddlers, and it’s also a novelty to catch the solar-powered heritage train that now runs from North Beach Station, just a few minutes’ walk from Elements into Byron. Oliver loves hearing the “toot toot!” of the train as it leaves the station, watching the inspector punch holes in his prized ticket, and waving at cars stopped at the crossing. This particular train is also a hit with mum, as it means avoiding driving and trying to find a parking spot in town!

The writer was a guest of Elements of Byron.