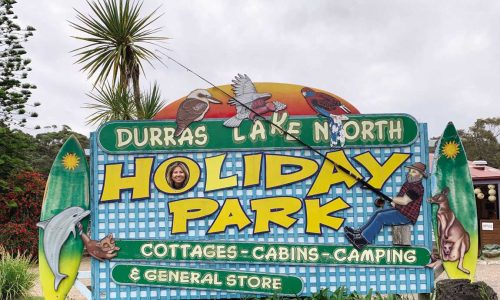 “Where the heck am I going?” – I distinctly remember that was my prevailing thought the first time I drove through the towering gum trees to North Durras. It was three years ago, when I was heavily pregnant with my first child. After visiting friends at Batemans Bay, around 20 minutes’ drive south, I’d called in, on my way home, to see another friend who was staying with relatives in a holiday park. I find that’s often how you discover the best, off-the-beaten-track places. On that day, we’d floated on inflatables along the small, shallow estuary in the strong current. I fell in love with the quiet, family-friendly vibe, and vowed to return one day with my yet-to-be-born son.

After seeing the horrifying images of bushfires devastating the area on the news last summer, my resolve was only strengthened. I was keen to support local businesses, and with the need for something to look forward to during COVID-19 lockdown in Sydney, I booked a trip there with friends for my birthday weekend.

Then there I was, driving the same road with my toddler giggling in the back seat as I tried to entertain him with funny noises at the end of a four-hour drive. It felt somewhat surreal.

Upon arrival at Durras Lake North Holiday Park we are greeted by a large, colourful, kitsch sign — the kind you can poke your head through to take a photo — with a picture of a fisherman, surfboards and various animals, including leaping dolphins, possums and kangaroos. I love it.

I’d read on the park’s website that there was a kangaroo guarantee, and I ask the manager about it when I check in. “Is that good enough for you?” he asks a few minutes later as he points in the direction of around a dozen roos foraging on the grass near our cottage. Then he grabs me by the hand and leads me closer to see the joeys, and tells me when they were born, before inviting my friend’s kids (who are staying in the cottage next to ours) into the office to get some birdseed for the parrots that have descended on the railing of the verandah. They happily oblige, and get a huge thrill out of hand feeding them. I can see how the colourful old school beach shacks — including Rosella Cottage, Lorikeet Cottage and Kookaburra Cottage — got their names.

Surrounded by Murramarang National Park, it’s no wonder wildlife here is so abundant. But there are only around half as many kangaroos as there were before the bushfires, which came within metres of the property. As the park is located on Crown land, it was evacuated for a week in December 2019, while the owners of neighbouring homes stayed and kept an eye on it. It was saved by fire retardant, and a last minute wind change. Regulars returned at the end of the month, but they were evacuated again in early January 2020, when fires came back from the other direction. After being closed for another two months during the COVID-19 pandemic, it has been a rough period for them, and many other businesses in the region.

We sit around the campfire toasting marshmallows at night, and the next morning I am surprised when two-year-old Oliver gives me a card and bottlebrush flowers freshly picked from the trees outside (with the help of my thoughtful friend) for my birthday; a truly special moment.

By mid-morning we have set off on a hike north along Durras Beach, with Oliver on my back in a hiking carrier. At first he cries and protests, and I contemplate giving up and turning back. But with the encouragement of my friends, I push on. We take turns to carry him and by the end of the day he is happily counting imaginary whales on the horizon.

We climb the steep track to Point Upright lookout, passing trees still blackened by the fires, down to the beautiful Depot Beach, where we stop for a picnic lunch on the grass. Returning along the rocky coastline, which can only be tackled at low tide, we pass Grasshopper Island and towering cliffs. We scramble over boulders and stop to admire starfish and sea urchins in the rock pools. “Imagine if someone was under that rock when it fell!” nine-year-old Archie exclaims, and we quicken our pace slightly.

After passing the aptly named Calm Corner, a serene swimming spot at the northern end of Durras Beach, we come across a small cave. The older boys and their grandfather crawl through it into a tunnel, which turns into a larger chasm, emerging a few metres away.

We pass kids playing in the crevasses of moss-covered rocks, and I make a mental note to return again when Oliver is a bit older. For now, he is content running along the top of the sand dune and sliding down on what can only be described as nature’s slippery dip.

On our final day we drive to Mogo Wildlife Park, around half an hour’s drive south, another place I’d been eager to support after seeing footage on the news of the keepers’ valiant efforts to save the animals during the bushfires. While other locals were fleeing the flames towards the beach, staff raced towards the zoo instead, making headlines around the world. One even temporarily housed red pandas in his kitchen. The park is home to over 200 exotic animals, many of them endangered species, including white lions, gorillas, Sumatran tigers, cheetahs, snow leopards, meerkats, giraffes and zebras. Ticket sales fund the endangered species’ breeding programs, and it is nice to know you are helping them get back on their feet. We also stroll the small gold rush town of Mogo, known for its arts and crafts and heritage buildings, some of which were destroyed in the fires. Oliver loves playing among the gargoyles and statues of frogs in the nursery, while I stock up on items from a homewares store.

We return to the cottage for a nap, whiling away our time sitting on the verandah watching the kangaroos hop around a few metres away. It feels like the kind of simple, carefree holiday from my own childhood. We were only there for a few days, but it’s the kind of place that if you stayed a week you’d feel so relaxed you’d be comatose.

The writer paid her own way.

Durras North is around four hours’ drive south of Sydney and two hours’ east of Canberra.

Durras Lake North Holiday Park has a range of campsites, cabins and cottages to choose from. Lightweight doonas and pillows are provided in cottages and cabins, but you have to BYO towels and linen, or hire them for $2 and $10 respectively. You can also hire kayaks, soft-sided surfboards and a limited range of DVDs, which are ideal for rainy days. Free Wi-Fi is available in the vicinity of the shop/office, and there is also a book exchange.