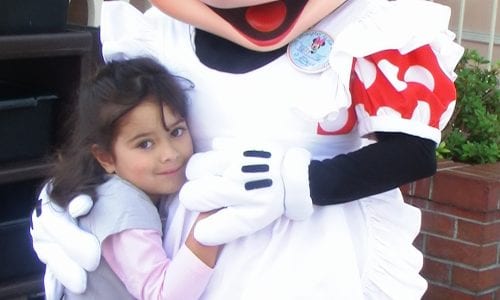 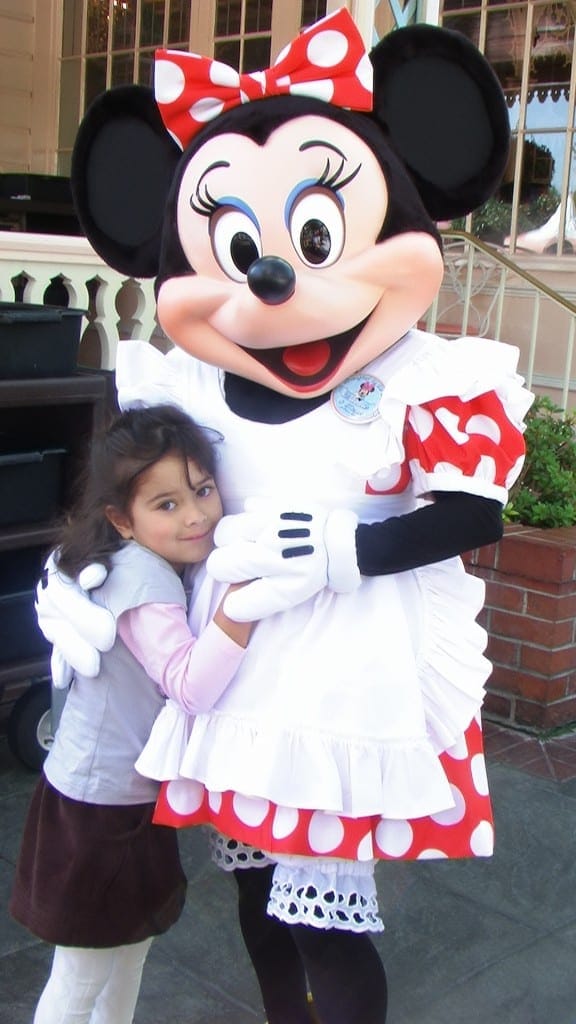 The guest list included Mickey and Minnie Mouse, Snow White and the Fairy Godmother and the location was The Happiest Place in the World. For my soon to be four-year-old daughter it was the perfect setting to create a lifetime of happy memories.

The whole purpose of our trip to Southern California was to celebrate Ava’s fourth birthday. And thanks to a special badge given to her at our hotel proclaiming her special day, our pint-sized princess was treated like Disneyland royalty everywhere she went.

The first stop on our three-day Disneyland adventure was the Plaza Inn for a very special breakfast with Minnie and friends. At this American-style buffet (with waffles the shape of Mickey’s face) the food takes second place to the circulating stars. In between mouthfuls of eggs, fruit, waffles and bacon, a seemingly endless stream of Disney characters – including Winnie the Pooh, Pinocchio, the Fairy Godmother and Captain Hook from Peter Pan – stopped by to wish Ava a happy birthday and pose for a photo and an autograph signing.

It seemed only fitting on her special day to seek a royal audience with the Disney Princesses. The hour long line-up was worth it when Ava got to spend one-on-one time with Snow White, Cinderella and Mulan. Later, an impromptu meeting with The Little Mermaid, Ariel and Jasmine near Aladdin’s Cave made us realise you could ‘accidentally’ bump into these Disney celebrities just wondering around the massive park. But of course, nothing happens by accident in this magical place where wonder and enchantment are included in the entry fee.

In Fantasyland, where Sleeping Beauty’s glittering castle rises above the mini city, a bonanza of rides exist for toddlers and pre-schoolers. We spent hours enjoying the Mad Tea Party cup and saucer ride, Pinocchio’s Daring Journey and the Alice in Wonderland ride to name a few. However, if you are travelling with older children not limited by height restrictions, make sure your visit to Disneyland includes high-speed rides such as the Matterhorn Bobsleds and Space Mountain.

At Disney’s California Adventure Park (home to the Pixar characters from the likes of Toy Story, Cars, Monsters Inc and A Bug’s Life) which pays homage to the Golden State, California, it’s impossible to go past the terrifying Twilight Zone Tower of Terror or the state-of-the-art California Screamin’. A highlight is definitely the daily Pixar Play Parade.

We had purchased a three-day pass initially thinking this was probably too long to spend in the one location, after all, many people see a whole city in three days. But it took only a day to become aware just how immense Disneyland – which includes eight magical ‘lands’ is – it’s a city in itself.

Day two started with a visit to Mickey’s Toontown. The cartoonish land is the perfect location for toddlers and pre-schoolers as it’s easy to navigate and full of exciting places to explore. The first stop was Minnie Mouse’s house where you can sneak a peak in her kitchen and even nose around in her fridge where you’ll find a half-eaten block of cheese! Next door is her boyfriend Mickey’s house. The neighbourhood is also home to Chip n Dale’s Treehouse, which offers a great view of the surrounding Toontown, as well as Goofy’s Placehouse and Donald Duck’s boat.

We were reminded again of the magic of Disneyland when we literally bumped into Donald Duck, Goofy and Pluto wandering around their neighbourhood.

As we were leaving Toontown, we heard that Winnie the Pooh and his friends were making a special appearance at Critter County, so off we ran to find the lovable bear with Tigger, Eeyore and Piglet. The shy Eeyore gave Ava a little fern he had plucked from a nearby tree and held his heart, a gorgeous gesture which is typical of the characters and really adds to the magic of the whole experience.

Day three was bitter sweet as we tried to fit in all the places we had so far missed. In Tomorrowland, which caters perfectly to younger children as well as older kids and teens, we took a ride around the huge course at Autopia in our own car and boarded the Finding Nemo Submarine Voyage for an underwater adventure. At New Orleans Square we took a tour of the spooky Haunted Mansion and went aboard the Pirates of the Caribbean ship while at Adventureland we climbed to the top of Tarzan’s Treehouse.

If you’re not ready to wave goodbye to the Disney experience, get a Park Hopper Bonus ticket which allows you to jump between both Disneyland and Disney’s California Adventure Park as often as you like for three to six days, depending on the ticket you buy. If travelling with small children consider staying at one of the three Disneyland Resort Hotels so you can easily return to your room for naps and still have time to take in plenty of the parks.Each evening we capped off our day with the famous parade of characters which gave us a chance to glimpse any “celebrities” we may have missed throughout the day. And each night from our hotel room in the nearby Disneyland Hotel we heard the fireworks cracking overhead, reminding us that we were indeed in the Happiest Place on Earth.