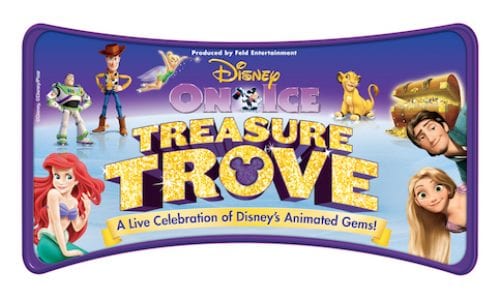 Disney on Ice ‘Treasure Trove’ is a treat for the family!

OAWK » Uncategorized » Disney on Ice ‘Treasure Trove’ is a treat for the family!

We ventured out to Allphones Arena with four very excited boys (two 5 year olds, a 3 year old and a 2 year old) to catch Disney on Ice ‘Treasure Trove’.

The boys couldn’t wait to get into their seats for the start of the show as the foyer and arena were buzzing with excitement and there were Mickey ears everywhere!

The show started with a bang as Toy Story exploded onto the ice with toy soldiers jumping out of a treasure chest and Jess, Woody and the crowd (and the boys) favourite, Buzz Lightyear appearing in quick succession! It was fun, bright, creative and fast.

Mickey, Minnie, Goofy and Donald Duck were the next characters to appear and they presented the show, searching for the ‘treasures’ of Disney. What a hard task that must have been, considering all the amazing animated movies Disney has created over the years.

There were performances from classic movies such as Aladdin, Rapunzel, Peter Pan, Cinderella, Snow White and the Seven Dwarfs, Sleeping Beauty, Mulan, The Little Mermaid and – what had to be my pick of the day – the Lion King.

The set design and costumes were beautiful as they recreated an African landscape and Simba, Nala, Pumbaa and Timon discovered the true meaning of the ‘circle of life’. The boys were super excited – yelling out ‘Simba” and ‘Scar’ – and were entranced with the stampede that was so cleverly created on the ice.

The top picks for the boys were definitely Peter Pan (tick tock crock and Captain Hook had them jumping out of their seats), Toy Story and the Lion King, but they loved the whole show and have been talking about it ever since. And what was our sons’ response when Dad asked how they liked it? “Awesome!!”

A really fun day out in true Disney style … Disney on Ice ‘Treasure Trove’ was a fabulous experience.