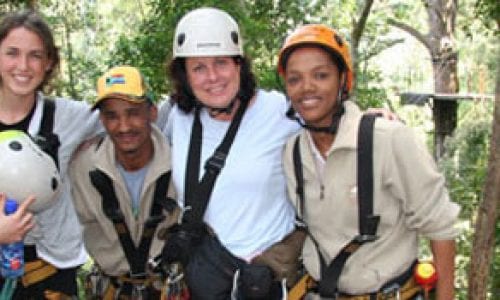 Diary of a South African Adventure

View all of Tori’s amazing images in her Wildlife, Capetown and People and Places photo diaries.

After a 14-hour flight from Sydney straight to Johannesburg, I was pretty tired. As the pilot announced our descent I took a glance out of the window. The landscape presented a never- ending puzzle of contrasting yellow and green fields were overwhelming. The South African journey of discovery, mystery and adventure had finally started.

After our final flight to Port Elizabeth we were greeted by a driver who would be taking us to our accommodation for the next two nights – Shamwari Game Reserve. Our driver’s name was Joseph and he gave us our first taste of the amazing warmth and humour of South-African hospitality. After a tedious and tiring flight I finally relented to sleep while in the car. Before long Joseph announced that we had finally arrived. We were then greeted by two staff Members of Shamwari Game Reserve, smiles and a warm greeting – exactly what was needed. We were shown to our room and then had our first South African meal. I have to admit, I was surprised and impressed with the Cape Malay vegetarian curry. For desert we chose an assorted cheese plate and a remind-me-of-home brownie. Finally, we took refuge to our room and collapsed.

Woken up at 5am in the morning I was ready and hungry to discover my first taste of South Africa on a safari. Despite the obvious lack of sleep I was ecstatic and excited to begin the adventure. As the cliché safari ignited its personal roar to life, I stared out ahead of the car and again was met with the familiar feeling of being overwhelmed. The endless pattern of green shrubbery and bush was juxtaposed to the harsh red roads that swerved and intertwined with the mystic African landscape. I slowly began to fall in love with South Africa.
Our Guide is an educated, helpful and extremely friendly, Pascal. Every question asked is answered without a second thought. The endless appears decorated with animals scattered haphazardly. With the warm morning sun peering over the mountains, its light falls upon our first found animal – the Giraffe. We listen to how Giraffes only sleep 30 hours in an average lifetime, having the talent of switching off half of a brain while munching on the leaves, allowing some sort of sleep. Astounding, new and amazing. As we travel on we discover water buffalo, zebras, warthogs, orex, springbuck, bushbuck and even a hippo roaming freely across our path. The animals, of which I would view with disbelief on Animal planet, are now right in front of my eyes. Disbelief, amazement, adventure.

After a big breakfast buffet with a delicious range of selections we are taken to the Wildlife Rehabilitation Centre. As we ride on the safari car, once again, I am constantly surprised at discovering another animal crossing our path. Once we reach the centre its time to feed the Caracals. These are 2 gorgeous kittens with alarming red fur and striking blue eyes. Fierce and successful hunters they are being hand raised having lost their mother. We then feed a baby Zebra called Zoe. Zoe is a 9 month old orphaned Burchell’s Zebra who would stop at nothing for a simple scratch.

This centre is where all of the animals are given veterinary care for the wide range of animals found on Shamwari reserve. The facilities are extraordinary because they have to cope with any illness or injury in wildlife from the most delicate bird to the enormous and not to mention dangerous rhinos, hippos and elephants. We then travel to “Born Free”, a conservation centre for big cats (lions, leopards and cheetahs) who have been rescued from poor treatment and neglect. Despite their problems these animals always have a majestic nature that surrounds them. We listen to Glen, the Animal Care Manager of the facility and carer of the cats that live there. He is a crazy character who makes us all laugh. He explains how each resident ended up in “Born Free”. The centre provides long term humane care for big cats that cannot be returned to the wild. It is sad listening to the stories of being kept in 3 by 2 cages and animals that have not grown their correct size due to poor nutrition and cramped conditions. However the commitment and care for these large cats are evident. There is a lot we can do to prevent this happening to other animals.

Straight from Born Free we begin our next adventure, the next safari. As the light begins its descent behind the large mountains ahead, the animals begin to make their long awaited appearances. We view enormous white rhinos grazing with their domineering horn leading the way. We observe a rare sight of two leopards resting. We watch holding our breath; colossal African Elephants within reach chomping carelessly on the thorn-covered trees that surround our car. The atmosphere of adventure is so real. We drive back with the diverse calls of the animals surrounding us, the need and desire of adventure grows, and Africa definitely is the place to provide it.

After our last morning drive with Pascale – our guide – we reluctantly said farewell to Shamwari Game Reserve with no idea what was ahead us we set off for our next destination. We were headed to Addo Elephant Park to stay at Gorah Elephant Camp. I had little to no knowledge of where we were going to stay that night and as we arrived I can confidently say I was more than impressed. It was breathtaking. Luxurious tents were perfectly positioned one after the other joined with a wooden platform that snaked its way around each tent. Each tent facing the mountainous land. A waterhole was placed less than 200m away from the tents allowing perfect vision of warthogs, water buffaloes and zebras thirstily sipping the water to quench their long awaited thirst.

As we walked down to the main manor for a welcome homemade iced tea, we are quickly alerted to the fact that five lions had sprawled themselves at a distance of 500m away! This giving each visitor the perfect opportunity to view these regal creatures. In awe, mum and I watched and waited captivated by these amazing animals squealing with delight at every simple yawn and stretch. It does sound ridiculous for such little activity, but the whole scene was remarkable. We later understood our amazing luck learning that there were only 12 lions over the entire reserve. After our childish initial excitement we were then taken on another game drive.

The incredible thing about these Safaris is that even if you are in the same place and go on numerous game drives each one is more unforgettable and breath taking than the last. It’s an exhilarating concept never knowing what could be around the corner. We surveyed the land that stretched to the horizon and I was dumbfounded by the destruction of trees that were left broken and destroyed on the ground floor. We were told much this was the result of the elephants using the trees for scratching purposes with young males knocking the trees out of testosterone fueled frustration. Elephant evidence was everywhere. We discovered zebras, Kudus, Hartebeests. But the astounding sight of two endangered male, black rhinos thrashing head to head was the highlight of the whole expedition. We all sat there taking in the reality of what we just saw, praising our good luck. Our guide, Gareth, assured us repeatedly he’d only seen that sort of sighting two times in three years.

As we started our retreat back to Gorah Elephant camp the sun (sadly) began its descent behind the mountains. The darkness intensified shadowing across the charming views, taking them away and making us anticipate tomorrow even further. The illuminated manor lit the way back to civilization. We arrived to canapés and drinks in front of a fire. Another special concept of Gorah elephant camp is there is no electricity. Light is created by candles, the fire and gas lamps. The only exception is two lamps in our rooms (or tents would be more appropriate), which are charged by solar power. The whole thing made the experience more special. Dinner was a three course meal which was complex and out of the ordinary to my usual diet. Having ostrich fillet for the main, which is something I had never tasted before. After dinner a staff member escorted us back to our tents. We were puzzled and confused as to why we would need an escort. After finally voicing our enquiry we were told they were there to protect us from the wild African animals that may or may not be lurking in the dark. Mum and I giggled to ourselves but were later surprised and delighted when woken up by the roar of lions which seemed to be unnervingly close to our tent. Africa’s amazement continues to charm our senses. How can tomorrow be better than this?