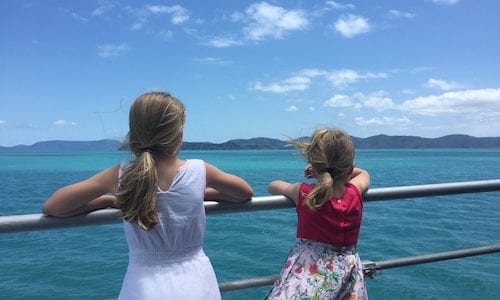 Just six months ago, our family read about a competition being run by Out & About with Kids and Escape Travel. Families had to build a sandcastle and send in a photo of their masterpiece. We were going to the beach the next day, so we thought, why not? After many laughs, we created and entered our masterpiece, and unbelievably, we won!

Fast forward six months and we packed our bags and arrived in one of the most beautiful places we have ever been in our lives. Cruising through the crystal blue waters on Whitsunday Cruises could only be described as majestic. Our three kids giggled and cheered from the upper deck as the wind blew through their hair and screams of excitement could be heard as Daydream Island came into sight.

From the start, we were enthralled! Kangaroos grazed on the grass as we disembarked from the cruise. The blue/green water was clear and sparkling and the hotel was surrounded by a living reef full of stingrays, sharks and starfish. We knew at this point that it was not going to be easy to leave – five nights suddenly didn’t seem like enough…

Our days were filled with one adventure after another. We hiked through the rainforest and across the island, we snorkelled out on the reef and swam in the three massive pools.

There were so many highlights, it’s hard to choose just one. The kids taking part in the ‘Stingray Splash’ was certainly one of them. Accompanied by a marine biologist, the kids waded into the living reef and squealed and giggled as baby stingrays sucked on their toes and feet. Those little rays endeared themselves to us, as they happily splashed around, eating food from the kid’s hands.

Wildlife is abundant and we were secretly as thrilled as the kids to find ourselves snorkelling alongside turtles and parrot fish. Best of all, the children didn’t need to go further than one metre in to the water to be surrounded by exotic fish who ate fish pellets from our hands.

I can honestly say that my husband and I both cheered as loudly as the kids as we made use of the pool bar in the main pool area. The kids enjoyed their milkshakes topped with fresh fruit and umbrellas and mum and dad certainly enjoyed the cocktails! Pina Colada anyone?

Our evenings were just as exciting as our days. We delighted in catching the golf buggy to the other side of the island. Dinner at the ‘Fish Bowl’ was a particular favourite as we ate scrumptious meals, surrounded by water and entertained by a water bird that had us in hysterics as he raced through the restaurant, night after night, demanding food from tourists.

As the sun sets, a giant outdoor cinema screen plays a family-friendly movie and we reclined in chairs to wind down after a long day of activities and adventures. The children were absorbed in the movie, but we found ourselves just enjoying the relaxing evenings, with a gentle breeze and tranquil setting.

We left the island one day and spent the day at Airlie Beach. The cruise on Whitsunday Cruises was once again majestic and entertaining. We wandered through local markets and ate fresh fruit. A large swimming pool/lagoon was a highlight, but we were all thrilled to return to Daydream Island at the end of the day.

Our final afternoon was spent swimming, snorkelling and enjoying a relaxing dinner.

Other travellers may have noticed us at Hamilton Island Airport – we were the family that was looking desperately at our devices, trying to work out when we can possibly return to Daydream Island. We may also have shed a few tears, as we looked over our many photos. Thanks for the memories Out & About with Kids and Escape Travel … you have awoken our travel bug and it may never be restful again.

– The L’Estrange family won the Sandcastles competition run by Out & About with Kids and Escape Travel and found that Daydream Island was the answer to their holiday dreams.

Out & About with Kids stories recognised in prestigious awards