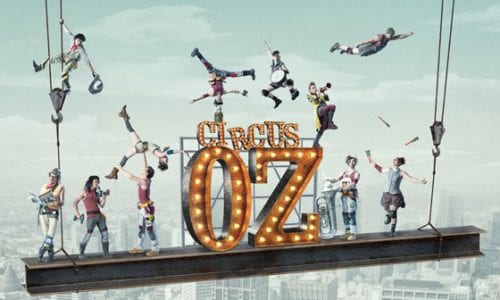 Circus Oz is Cranked Up for January!

OAWK » Uncategorized » Circus Oz is Cranked Up for January!

Circus Oz sizzles back into the Circus Oz Big Top at Sydney’s Tumbalong Park in Darling Harbour with their latest critically acclaimed show – Cranked Up from 1 – 27 January 2014.

Inspired by a construction site, Cranked Up is a tight and road-hardened production allowed to play hilariously fast and loose that features acrobats suspended from, and flying through the air around, the show’s centrepiece – a giant swinging steel beam.

The Circus Oz ensemble have bounced this show’s characters, gags, stunts, flips and twists off each other for almost two years and they can’t wait to return to the Circus Oz Big Top jammed right into the heart of Sydney. Darling Harbour Alliance welcome the global circus phenomenon back in January 2014 – where Circus Oz will be a key feature in the exciting activities scheduled in the precinct.

Expect the irreverent Circus Oz spirit, cack yourself with the company’s much-loved larrikin characters and thrill at daring new death-defying feats – all accompanied by an original rocking eclectic live band.

Credited with revitalising a traditional artform in a uniquely Australian way, Circus Oz is a rock ‘n’ roll, animal-free circus that has influenced the development of circus arts around the world since its foundation in 1978 – and this year turns 35!

$25-$95
Suitable for all ages
Family tickets and group prices available
ticketmaster.com.au or call 136 100