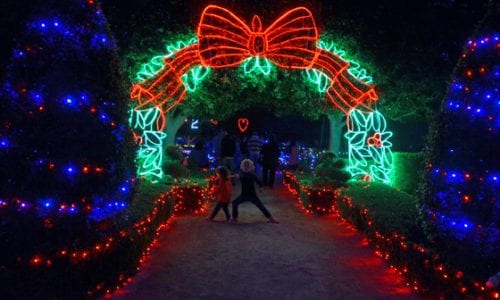 Take 25 acres of beautifully landscaped garden complete with lakes, cascading waterfalls and a storybook garden inhabited by fairytale characters. Add 1.5 Million Christmas lights, fabulous children’s entertainment, a resident Santa Claus, two enchanted children and a Christmas tragic like myself and you have a recipe for a memorable and magical night.

Now in its seventh year The Hunter Valley Gardens Christmas Lights Spectacular is Australia’s biggest Christmas Lights display. Taking more than 4000 hours to install and take down and with more than 200km of string lights , this is one case where bigger really is better!

My two kids are already in heaven when they spot a giant jumping castle and a stage where a snowman is doing his thing with his all-singing all-dancing pals. I spot the hot churro stand so I’m pretty happy too. But we’re here to see the lights so after a jump and a dance we delve into the gardens.

We are mesmerised as soon as we enter the glowing gardens and follow a path through canopies of trees dripping with coloured light and under incandescent light tunnels until we reach fairy lit fantasy gardens full of luminous penguins, flashy flamingos and radiant reindeer.

We look this way and that as we take in the Twelve Days of Christmas music and light display in the Border Garden and crane our necks to stare up at giant shimmering Xmas trees. Marlo squeals with two-year old princess-loving joy when we reach Cinderella’s glittering castle and Rafferty hits the light up dance-floor to bust some moves in the Lights Spectacular Marquee.

We continue on through fields of neon cactus and glistening waterfalls, oohing and aahing all the way until eventually it’s time to head home. At least that’s the plan, but it’s somewhat scuppered but the arrival of The Almost Amazing Johhno who, as illuminated as the garden, stops by with his bag of tricks. He balances tables on his face, and shoots flames through the air with invisible bullets until, like a lunatic pied-piper, the mirthful magician has a trail of kids following his every move.

My children are not immune and they too are soon under the somewhat silly spell of the charming conjourer. And that’s when the real magic happens. My besotted five-year old son, having bonded with The Almost Amazing Johnno over a shared love of red Converse and bad jokes, has joined the act.

Together they become a living Christmas tree, my son balancing triumphantly on his shoulders while I watch from the sidelines nervously as my son suddenly becomes nine-feet tall. They pull a meerkat out of a hat (there are no rabbits handy) and perform card tricks with invisible bullets accompanied by a soundtrack of uncontrollable giggling from my delighted son which, for me, is the most magical part of all.