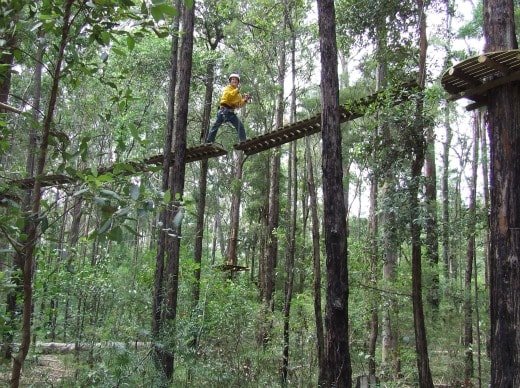 I’m standing in Treetop Adventure Park craning my neck and squinting against the sunlight, trying to give encouragement to my partner as he attempts the Black Run, which I (wisely) chickened out of.

It’s harder than he thought it would be. Harder than I thought it would be – and it’s very, very high. Of course the kids proclaim that they could easily master it if only they were over 16 and allowed to. Easy for them to say having already completed the Green, Blue and Red runs but I’m fairly certain they all found the whole course quite challenging.

We’re here on the Central Coastof NSW in search of adventure, and haven’t really had to search very hard to find it. So far we’ve checked out the Kids to Keepers program at the Australian Reptile Park, quad-biking at Glenworth Valley, and while the kids were occupied with all the Kids Club activities at Ocean Beach Holiday Park, even managed to squeeze in a wreck dive. Phew.

The Central Coast is so accessible to Sydney – just over an hours’ drive – I wonder why we don’t come here more often.

The drive up is surprisingly smooth. For once the traffic-jam gods don’t conspire against me and I’m rather grateful to be driving this Ford Mondeo which, like a fatherly back seat driver, beeps at me when I absent-mindedly let the speedometer hover a little too high. It’s a fairly handy feature when taking on a smooth 6-lane highway with no traffic to slow me down.

Ocean Beach Holiday Park is massive, with everything the kids had on order; swimming pool, complete with slide (mandatory), not one, but TWO giant jumping pillows, playground and games room.

The kids spend the morning here checking out the many kids’ club activities while we check out Australia’s best wreck dive (that’s my own assessment). The most accessible wreck dive in any case – the Ex-HMAS Adelaide – only 5 minutes off Terrigal Beach where we meet our dive master Bob Diaz of Pro Dive Central Coast.

It’s accessible too even for the most novice of divers (like me) – well set up with a guideline to follow from anchor line to sunken top deck, wide open doors to swim through without fear of getting stuck – and Bob himself who explains things and guides us so well.

After a rather hurried lunch we head off to The Australian Reptile Park. We’re splitting up here, with the younger kids checking out the Kids to Keepers program, while the older kids (I’m including my partner in this group) head off to Glenworth Valley to hoon around dirt tracks on quad-bikes.

So the younger kids emerge from the Australian Reptile Park a few hours later with wide-eyed descriptions of feeding snakes and alligators and “enriching” Tasmanian devils. Older kids emerge with several layers of dust welded to their sweaty bodies and enormous grins.

The next day we test our coordination and upper body strength at Treetop Adventure Park – certainly a challenge for me. It’s an exciting and well-designed course with plenty of challenges even on the Green Course, and plenty of flying foxes to whiz along at high speed. Highly recommended!

Our weekend is rounded off nicely with lunch and a swim at the Mingara Recreation Club in Tumbi Umbi. Top notch lunch and great service, as my 10-year-old daughter puts it (channelling Kath and/or Kim), “I like this place! It’s fancy and it’s classy. Which I like.”

For more information on the Central Coast

Deborah Dickson-Smiths’s first trip with her first child (at 4 months old) involved a 26 hour flight with no sleep, which is round-about when she realised travelling with kids wasn’t quite the same as without. Deborah has lived in Singapore, Kuala Lumpur, Edinburgh, London and now resides in Sydney’s northern beaches with her Brady Bunch-style family of seven – all seasoned travellers.