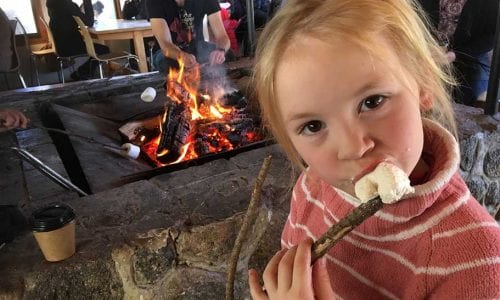 Why a weekend in Canberra will surprise you

OAWK » Uncategorized » Why a weekend in Canberra will surprise you

Before I had children, the idea of going to Canberra with kids for a weekend away had about as much appeal as doing a revision of logarithms. I’d assigned our nation’s capital to a dusty chapter of “what one learns about in school, then promptly forgets”.

How wrong I was.

Canberra, it turns out, is the glittering jewel in a family’s travel diary. At least, that was my recent experience when we headed there on the Queen’s birthday long weekend.

I had chosen Canberra as the spring board for our kids’ first experience of snow (our kids are 3 and 5 years old). I’d heard about Corin Forest, about 40 minutes outside of the city, where children could do “snow play” and ride on toboggans… without the exorbitant cost of a full trip to the ski fields. But we discovered there was much more to do than just that.

Before I get to the wonders afforded to children in Canberra, I have to wax lyrical about the hotel where we stayed. I’d been told that the East Hotel was family friendly. “Family friendly” to me translates to caravan parks where no one minds children climbing on everything and generally making a ruckus. I couldn’t imagine how it would work in a nice hotel, where there was inviting furniture, soft lighting and possibly a spa bath.

When you’re a parent, and you’ve travelled for several hours in a car with disgruntled small children, it’s the little things that delight you.

Like the children’s books that were waiting on the corner of their beds. And the Kit Kat placed upon those books. Or the gaming consul that had been set up just for them.

Small gestures that are like a gentle invitation: your motley crew are welcome here.

After resting with the kids far enough away that I couldn’t hear their night time murmurings (our rooms were separated by a spacious living room) we set off for our jam-packed Canberra “big day out”.

We started out at Questacon, a scientific exploration centre designed for children. I’d heard a lot about Questacon, and it didn’t disappoint. We could have spent the whole day there and the kids would have been happy. I’m not saying that it converted them into science geniuses, there was just way too much to absorb in one day, but it was fun for everyone.

After filling our brains to almost exploding, we thought it would be a good idea to let the kids run around and get some energy out, so we headed to the National Arboretum with its amazing playground of huge acorn pods and connecting string walkways.

And finally, we went to Cockington Green Gardens. If you speak to a local, they’ll tell you that the Cockington Green Gardens is naff and strange. I say “bah humbug!” What could be more enchanting for small children, than a world full of miniature cottages, buildings, castles and ruins? And I say that as a Mum who waited half an hour for a tiny train trip that lasted about 5 minutes. The kids loved it, and if I’m honest, I found it quite entertaining as well.

But the big event of the trip was yet to come.

A child’s first experience of anything is a delight for most parents. Their first ice cream, their first ocean swim, their first touch and taste of snow. In some ways, Daniel (my husband) and I were as excited as the kids about their first time seeing snow.

When we went to Corin Forest, it was the first “official” weekend of their season. The car park was full, and there were small children and their adults clumping about in ski boots and other snow paraphernalia. The fields themselves were patches of white in an otherwise typical Australian bushland. Corin Forest has a snow making machine, which is why the patches of white looked a little incongruous in the otherwise snow-less landscape.

The “snow play” sessions go for about 2 and a half hours, which is plenty of time for young children to hoon down the small hill in a toboggan, or throw snow balls and make snow men in a separate area. If you’re used to the deep snow drifts of higher ski fields, Corin Forest may dampen your enthusiasm. My daughter’s snow man was more like a snow mouse, but for her, it was the best thing to happen all year.

You can hear what she felt about the whole experience here.

Once the kids had their fill of the snow, we went to the café, drank hot chocolates and bought some of the biggest marsh mellows I’ve ever seen, which the kids proceeded to roast over the open pit fire.

Canberra was so much more than I would have believed in my “pre-kid” days. But travel now is as much about my children as it is about me, and this trip felt like it had something for all of us.

Shevonne Hunt was hosted by Visit Canberra and Corin Forest

The 5 best family adventures in Brisbane