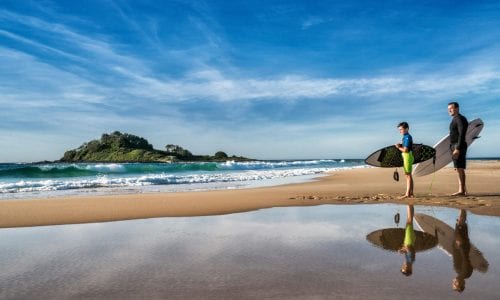 The NSW South Coast was one of the hardest hit regions, with fires raging for hundreds of kilometres. In the Eurobodalla Shire, which encompasses Batemans Bay, more than 500 homes were lost and nearly 80 per cent of the landscape was burnt. But the area is eager to see tourists return. Eurobodalla is known for its natural and unspoilt beauty, and the bushfires impacted some, but by no means all, of its magnificent beaches, national parks and state forests. Hire a kayak or stand-up paddleboard and head to the water, ride along cycleways, or snorkel with playful seals at Montague Island at Narooma. Birdland Animal Park at Batemans Bay is a great place for kids to meet native animals including wombats, emus and snakes. Mogo Zoo, which was saved by its dedicated employees, has also reopened under a new name, Mogo Wildlife Park. As well as having the largest collection of primates in Australia, here you can see zebras, rhinos and giraffes wandering its savannah plains, and get up close and personal with meerkats, lions and affectionate red pandas.

Visit Bodalla Dairy and feed the poddy calves before sampling the amazing cheese, milkshakes, yoghurts and ice-cream produced here. The region is also known for its seafood, especially oysters, with many award-winning waterfront restaurants and family eateries.

In the Shoalhaven region, areas affected during the fires over summer included Conjola, Bendalong and, to a lesser degree, Bawley Point and the outskirts of Kangaroo Valley. While many coastal villages were not impacted by bushfires, they were impacted for a number of weeks by road closures and media calls to avoid travelling to the region due to safety concerns. Now roads are back open, as are all its towns and villages, but some national parks remain closed. Visit Shoalhaven Zoo, on the banks of the Shoalhaven River, or fly through the air and get your heart racing at Nowra’s Trees Adventure. Take a wildlife cruise at Jervis Bay to spot dolphins, whales and seals, or go kayaking or stand-up paddleboarding in the beautiful inlets, creeks, rivers and basins. There are also lots of new offerings, including Currarong Surf School, Woe Be Gone Freedive in Jervis Bay and Djiriba Waagura cultural tours, with local Aboriginal man Matthew Simms. “The best way you can support our community is by booking a trip, so you can rejuvenate in the Shoalhaven,” Shoalhaven Council’s acting tourism manager Shannan Perry-Hall says.

Further south, while the main coastal Sapphire Coast towns including Merimbula, Pambula, Bermagui, Tathra and Eden were not directly impacted by bushfires, they were seriously affected by the loss of the traditional summer tourism influx. The area is known for its pristine beaches and award-winning oysters. Go fishing at Merimbula Wharf or Tathra Wharf, take in the views from the new Headland Walk, meet native animals at the Potoroo Palace Native Animal Sanctuary near Merimbula and visit the Blue Pool at Bermagui. There’s also the new Camel Rock Surf School at Bermagui, and a new all-abilities playground at Tathra Beach.