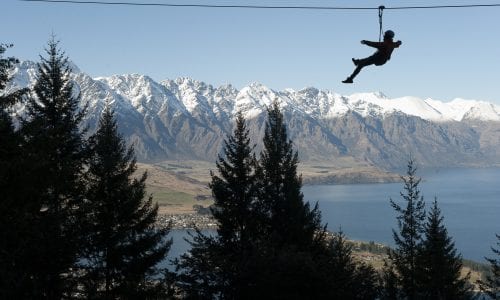 A world of fun awaits just across the ditch. Here are our picks for the most epic experiences in the Land of the Long White Cloud.

Find out what it feels like to soar through the sky at iFLY Queenstown – New Zealand’s first and only indoor skydiving centre. With the simulation of true free-fall conditions in a vertical wind tunnel, the dream of flight can become a reality for anyone aged five and up. All first-time flyers have two instructors – one to help you in the tunnel, and one to control the air speed. The experience starts with a pre-flight briefing an hour before take-off. Participants go through the basic flying position as well as learning a couple of hand signals to use in the tunnel. High-definition cameras capture the whole flight, guaranteeing an awesome new Facebook profile pic!
iflynz.co.nz

Whether it’s a short hop to a glacier, landing in Mt Aspiring National Park, or a flight to beautiful Fiordland, a scenic helicopter jaunt with Wanaka-based Alpine Helicopters is an unforgettable highlight of a South Island holiday. The company’s comfortable, modern helicopter fleet ensures panoramic views and the ability to travel safely to incredible places few people ever visit.
alpineheli.co.nz

New Zealand is a popular destination for Aussies looking for a Southern Hemisphere ski holiday, thanks to its great value, towering peaks and gobsmacking views. Around 20 minutes’ drive from Queenstown, Coronet Peak is a terrific option for families. It has extensive beginner facilities, modern and easy to use chairlifts, progressive terrain and packages for all ages, as well as night skiing on Wednesday, Friday and Saturday nights. Its ski school, Skiwiland, takes bubs from three months up to kids aged five years, and there’s lesson and gear hire packages for kids aged five and up. Coronet Peak’s snow play area is ideal for making snow angels, throwing snowballs and sledding. Closer to Wanaka, Cardrona also has wide, open runs, a designated beginners’ area, a licensed childcare centre and kids’ ski & snowboard school. Children will love having snowfights and having their photo taken with the resort’s mascots, Pengi and Frosty. And Mt Hutt’s Kids 4 Free campaign gives children aged 10 and under free lift access during the 2019 season! It also includes free accommodation for kids at selected properties in the Methven area, free travel to and from Christchurch Airport and meals, activities and board and rental hire at selected businesses. Terms and conditions apply.
coronetpeak.co.nz
cardrona.com
methvenmthutt.co.nz

There’s no better way to take in the view over Queenstown than ziplining with Ziptrek Ecotours. The award winning company offers a spectacular and fun adventure through the forest canopy high above town, on Skyline Gondola hill. The ziplines are gravity fed, so there’s no need to worry about controlling your own speed. On the North Island, catch the ferry from Auckland to Waiheke Island where EcoZip Adventures offers state-of-the-art flying fox ziplines and an eco-immersive forest walk. Siblings can fly side-by-side on dual cables that are over 200m long.

Zip One, or Vineyard Cruise, provides a gentle introduction, soaring above a beautiful working vineyard. Zip Two, or City View increases the tempo – taking you higher and faster and providing magnificent views of the city, some 25km away. Then it’s time for Zip Three, or Kurinui, which zips along at speeds in excess of 50kmh – faster than you can legally drive on Waiheke’s roads! ziptrek.co.nz or ecozipadventures.co.nz

Fans of The Lord of the Rings and The Hobbit trilogies can’t miss this magical experience near Matamata on the North Island. A tour of the only set that remains intact from the blockbusters takes you past Hobbit holes and The Mill on the Alexander family sheep farm, which was chosen by acclaimed director Sir Peter Jackson as the site for The Shire.

A guide will point out the intricate detailing and explain how the movies were made. There’s also a tour that includes a banquet feast at the Green Dragon, with tables laden with traditional Hobbit fayre.
hobbitontours.com

Get back to nature rafting or kayaking down one of New Zealand’s picturesque waterways. River Rats Rafts and Kayaks offers rafting experiences across grades two to five. Children aged five and up can join the Rangitaiki grade two scenic expedition in the Bay of Plenty on the North Island, while thrill-seeking teens will love getting white knuckle thrills on the Kaituna Waterfall or Wairoa experiences.

The company also offers lake kayaking and river sledging activities, with guided kayak trips to the Manupirua Springs Hot Pools. Rafting New Zealand runs rafting for kids aged three and up in the alpine village of Turangi and in Taupo township. The Thermal Float Rafting Adventure travels down New Zealand’s longest river, Waikato, as it departs Lake Taupo. The grade two Tongariro Family Fun adventure is ideal for families with younger children, with more than 20 fun rapids and an optional cliff jump.
riverrats.co.nz or raftingnewzealand.co.nz

For the ultimate adrenaline rush, look no further than AJ Hackett Bungy in Queenstown. Inspired by Vanuatu’s land diving ritual, AJ Hackett founded the world’s first commercial bungy jump site here in 1988 – a year after he bungy jumped off the Eiffel Tower. The Kawarau Bridge Bungy takes you back to where it all began. Confront the original 43m-high leap, either solo or in a pair. For that extra rush, try a dunk in the mighty Kawarau River. You can also roll or jump from the 47m-high Ledge Bungy freestyle bungy site, or take on New Zealand’s highest bungy – the Nevis Bungy – 134m above sea level, with a free fall of 8.5 seconds. And if that’s not enough, it now has swings, catapults, ziprides, climbs, skyjumps and skywalks! bungy.co.nz