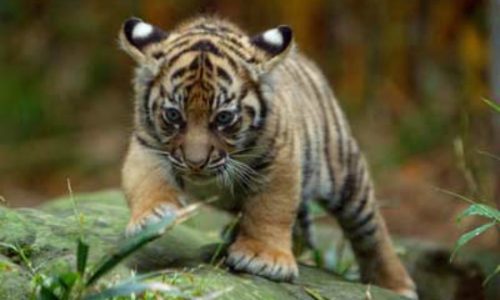 Little visitors to Werribee Open Range Zoo can now monkey around and hang out – literally – with the zoo’s resident gorillas. The Melbourne Zoo’s spectacular new gorilla exhibit, Gorillas Calling, boasts an innovative play space mirroring the gorillas’ climbing areas inviting children to climb tree trunks and ropes while pretending to be gorillas themselves. Plus there are also several viewing platforms to give visitors plenty of vantage points to watch these magnificent creatures.

The multi-million dollar exhibit is the new home for three western lowland gorillas – silverback Motaba and his two sons, Yakini and Ganyeka. The three gorillas are now settled into their state-of-the-art bachelor pad, complete with wading pool, large climbing poles and incredible views across the zoo’s open range savannahs.

Kids under 16 can get in free to Melbourne Zoo, Healesville Sanctuary and Werribee Open Range Zoo on weekends, Victorian public holidays and Victorian school holidays. As well as free admission, zoo memberships are now more affordable for families with zoo members no longer having to pay for kids as part of their membership. Members will be able to bring their children to the three zoos any day of the year, as many times as they like. It is hoped that as more people visit the zoos, as a result of the more affordable entry, the zoos will be able to engage more people to save wildlife. More details.

Giraffes, rhinos and zebras are just a hop, skip and a jump away, with the opening of a new 700-metre track walking track linking visitors from Australia Zoo’s South East Asia Tiger Temple exhibit to its fantastic new 24-acre African savannah exhibit. The new track means visitors can experience the African savannah at their leisure as well as offering different views and corners of the zoo to explore and greater flexibility. Visit Australia Zoo for more information.

Sydney Aquarium’s Great Barrier Reef exhibit is now home to critically-endangered sawfish. Measuring up to two metres in length, the sawfish are a sight to be seen. These evolutionary marvels have adapted to live in both salt and fresh water, while their long saw-like rostrum (nose) has evolved to expertly forage for food under the sandy, silty ocean floor. The sawfish will join Sydney Aquarium’s other fascinating new residents, the enormous Japanese spider crabs, with their long spindly legs that can span up to just under four metres and bodies weighing as much as 20 kilograms.

It was good news for an injured loggerhead turtlewho after being nursed back to health by vets at Taronga Wildlife Hospital, has been successfully rehabilitated and released into the wild. The endangered loggerhead turtle arrived at the Sydney zoo as a 61 gram hatchling with a fractured flipper. After initial veterinary care at Taronga, the little turtle was taken to Oceanworld Manly to grow before returning to Taronga Wildlife Hospital to ensure its fractured flipper was fully functional. He has since been successfully rehabilitated and released off Lord Howe Island by Marine Park Rangers. The released Loggerhead has been fitted with a state of the art satellite tracker and will assist researchers with the mysterious migration habits of the endangered species.

The fish are certainly biting at Melbourne Aquarium, which has launched a new fish feeding experience. Suitable for all ages, the fish feeding activity allows visitors direct access to the top of its 2.2-million litre oceanarium. Simply sprinkle the specially-developed food pellets into the water and watch the frenzy of fish activity as blue-line snapper, trevally, salmon and bream head to the surface for a nibble. The experience also allows visitors to get up close to huge sharks, stingrays and hundreds of other marine animals as they swim along the busy underwater highway right below. Visit Melbourne Aquarium for details.

Enjoy some fun on the farm with a Mowbray Park pre-booked day visit. Not only can kids spend time getting to know the friendly faces on the farm and enjoying great hands on experiences at the nursery feeding the animals and milking the cow, you can also learn to crack a stock whip, throw a boomerang or cook some damper around the fire. Or perhaps your kids might prefer to head off on a trail ride, feed the cattle or horses or try their hand at archery, canoeing, and tennis. More information at Farm Stay Holidays.

Ring-tailed lemurs Lily and Indray, from Canberra Zoo & Aquarium are the proud new parents of cute and cuddly twins.

Taronga Zoo’s reptile keepers have welcomed a baby star tortoise, only the second to hatch at the zoo in 30 years.

Melbourne Zoo’s recently arrived group of coatis (members of the raccoon family) have settled so well that they have produced three litters, with a total of 21 kittens.

Visitors to Taronga Western Plains Zoo can now see the Galapagos tortoise hatchling in a specially-made enclosure. Weighing just 87.25 grams at birth, the little hatchling will take around 25 years to reach full size.

How to Be a Greener Traveller