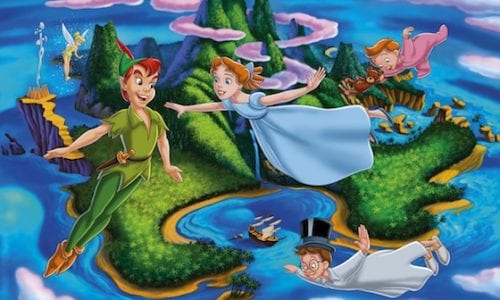 That’s me, on the left in the picture, in my green suit… flying high above Neverland with my friends Wendy, John and Michael Darling…

I may have just drifted back in time to my four-year-old self for a moment.

Of course, it’s really Peter Pan, but I was once so enamoured of Disney’s ‘little-boy-who-never-grew-up’ that I not only assumed his identity but also his awesome ability to FLY …“don’t worry! I’m Peter Pan! I can FLY!” family legend has it that I shouted more than was comfortable for my parents, from the top of verandahs, tables and en route to the garage roof.

My daughter can’t believe that I thought I was Peter Pan. He’s a boy! I should have shared an affinity with Tinkerbell or Wendy, surely?

Not for me… Peter Pan had it all…the aforementioned flying ability, his very own fairy, Tinkerbell, complete autonomy and loads of adventures, a posse of Lost Boys to pal around with and a beautiful paradise – Neverland – in which to play.

Many years on and here am I at Sydney’s Entertainment Quarter for a special screening to commemorate the 60th year of Disney’s Peter Pan. Surrounded by parents and loads of little ones, we’re greeted on the Red Carpet by Peter Pan himself, Captain Hook and even Tigerlily. It’s hard to say who’s more excited – me or the kids – as Captain Hook fends off multiple knee-high thrusts of balloon swords, wielded by swashbuckling youngsters before the movie begins.

We had a fantastic time at Peter Pan. The kids had a great time. It was a red carpet event and there were a few stars there including Fitzy, Peter Phelps, Tara Dennis. There was also characters dressed up, face painting, balloon animal making. The kids received a bottle of water and a nice Peter Pan book to keep.

In fact this will be the very first time I have seen Peter Pan on the big screen – and when the lights dim and the children squeal in anticipation, the wonderful world of Disney unfolds, bigger than life-size, in front of my very eyes!

Immersed as I was in the action, I hear Peter Pan first-timer, five-year-old Antonio, shout from his seat “I LOVE this movie! I LOVE it!”

“Me too!” I want to shout out in response but, of course, that would be inappropriate at my age, not to mention embarrassing for my companions… so to preserve my dignity I just mouthed it, silently, to my alter-ego, big-screen Peter Pan instead.

The Disney Peter Pan Diamond Edition is out on June 5 on Blu-Ray and DVD.

If you’ve seen Peter Pan – see it again! If you have never witnessed the magic or your children have yet to encounter this fabulous film, visit disney.com.au/peterpan and fly all the way to Neverland!

Christine Kane is a writer and editor who took her first road trip in the back of the family Holden from Melbourne to Sydney at 3 months old. Since then, she’s travelled throughout Australia and internationally by all manner of transport and never tires of discovering, and rediscovering, destinations with her own family.