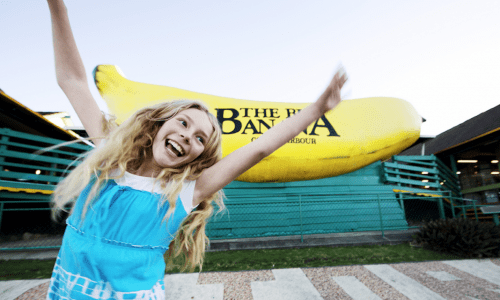 The Big Banana, the Big Merino and even the Big Cod. From the 1960’s Australia had an obsession with big things. Most of them make great road trip stops. Here’s our list of the best 15 Australian big things.

The Big Banana has been around for five decades. This is the original Big thing. The banana kick-started Australia’s love for BIG tourist attractions. John Landi wanted something to make the passing traffic stop at his roadside banana stall. Hed heard of a ‘Big Pineapple’ in Hawaii. He liked the idea, and the biggest banana in the world was officially opened on 22 December 1964. Landi was the first to come up with the concept. But the banana wasn’t the first Australian big thing built. That award goes to the Big Scotsman.

Australia’s oldest BIG thing is a statue of a 5m high Scotsman, known as Scotty. It was erected in 1963 on the corner of Scotty’s Motel in the Adelaide suburb of Medindie. Scotty was designed by Paul Kelly, who went on to create The Big Lobster.

The Big Rocking Horse and the Toy Factory share the same site in the Adelaide Hills. Climb right to the top of the World’s Biggest Rocking Horse and take in the views from its head. You’ll receive a Certificate of Completion at the end of your climb – and make sure you visit the fabulous wooden toy factory too.

A tribute to the Goulbourn district’s fine wool industry, The Big Merino is a life-like model of a famous local stud ram called Rambo. The Merino was erected in 1985. He’s more than 15m high and 18m long. He weighs a whopping 97 tonnes.

This 6m tall statue of Australia’s most famous bushranger and outlaw stands guard at the Glenrowan Heritage Precinct, which also houses the Ned Kelly Memorial Museum.

The Big Pineapple was opened in 1971 and has since been heritage listed. The Big Pineapple is one of the most visited BIG tourist attractions in the country. Even Prince Charles and Princess Diana stopped here during a Royal Tour.

Weighing 35 tonnes and standing 9m high, the NSW north coast’s homage to a crustacean was built in 1989. After a $400,000 makeover in 2013 the Big Prawn looking more resplendent than ever!

The Big Aboriginal Hunter and his wife and child

In 2005 the giant 17m tall Anmatjere Man first loomed on the hill at Aileron. In 2008 this impressive indigenous warrior was joined by an equally impressive representation of his wife and child.

The town of Kimba is notable for being the halfway point between the east and west coasts of Australia. Kimba is also home to an 8m tall galah set amid huge wheat silos. Visit the Kimba Half Way Across Australia Gem shop and the Kimba and Gawler Ranges Museum while you’re there.

Located outside the Gold Panner Motor Inn, this giant statue makes a striking sight and gives a nod to Bathurst’s gold mining heritage.

One of the more recent additions to Australia’s wealth of BIG statues, The Big Miner is a tribute to the gold prospectors who flocked from around the world to this part of Victoria during the gold rush of the late 1800s. It’s 8m tall and hand-sculpted from polystyrene and was officially unveiled in 2006.

Much-loved by thousands of locals and tourists, Larry the Lobster made his public debut in 1979 and was created to entice passing motorists to stop at a seafood restaurant – and at 17m high and 15m wide there’s no way you can miss this giant sea creature.

Here’s a mighty fish! 15m long and 6m wide, the Big Murray Cod was originally created as a movie prop. The locals adopted him in 1991 and nicknamed him ‘Arnold’, and now he sits outside the Swan Hill train station.

6 great weekends and days out in Perth

An insiders guide to the Blue Mountains

Close enough to Brisbane and the Gold Coast to avoid tedious hours of driving, yet far enough removed to embody the charm of regional Queensland, here’s 8 fun things for the family to do in Ipswich